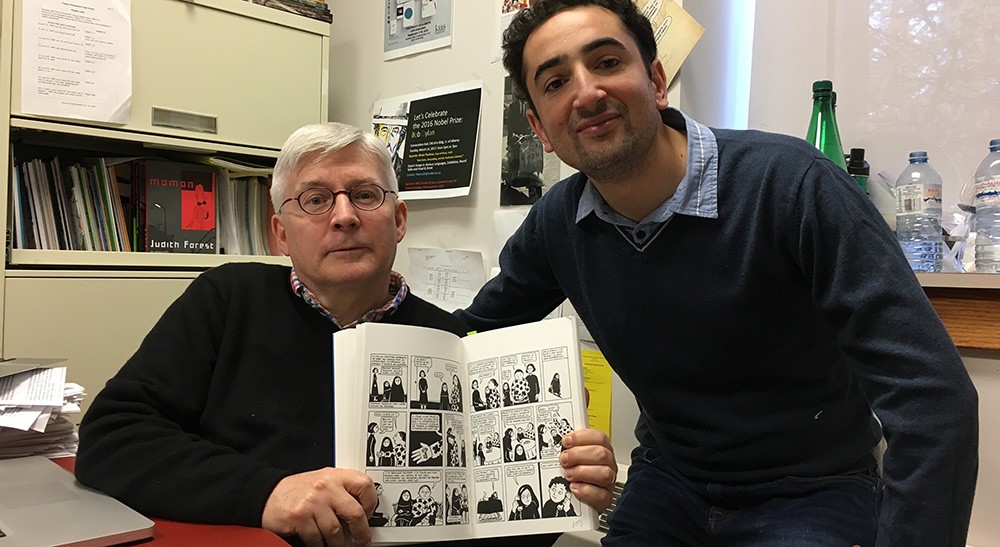 Cultural studies scholar Chris Reyns-Chikuma and PhD candidate Houssem Ben Lazreg hold a copy of Persopolis, a landmark graphic novel from the Middle East that depicts the life of a 10 year-old girl in Iran.

Step aside, Wonder Woman. Move over, Supergirl. Make room for Marji. She’s 10 years old, Iranian and wants to be a prophet when she grows up. Not your typical comic book heroine, but for almost 20 years, she’s been challenging how Western culture views the Middle East.

Though fictional, Marji is based on her creator, author Marjane Satrapi, and the character—first introduced to French comic book fans in 2000—represents a growing stable of Middle Eastern women writers who are making their lives and voices heard through graphic novels.

The 153-page black and white publication depicts Marji’s coming-of-age in Iran during and after 1979’s Islamic revolution and is considered a leading example of the genre. It was published in English in 2003 and then to world readers in many more languages. It drew critical acclaim and was eventually made into a French animated film that garnered both Golden Globe and Academy Award nominations, among many other awards.

Reyns-Chikuma and Lazreg, who recently published their observations in Arab Studies Quarterly believe Persepolis, and other Middle-Eastern works like it, hold relevant messages for Western culture. They discuss the novel’s impact.

Q: Why did Persepolis draw widespread attention when it was first published?

Reyns-Chikuma: “The perspective was very unusual. It’s a personal account of a girl growing up in a turbulent time in Iran and the world, just before the Islamic Revolution. She was raised in Iran under the Shah’s rule, and then as the Ayatollah Khomeini came to power. It inspired other authors from the Middle East, especially women writers.”

Lazreg: “You have a woman’s voice (Satrapi) from the Middle East representing herself. That defied flawed Western perspectives about Muslim women in general, as being self-effaced, oppressed and victims of their families, communities and religion. She offers new images of progressive, determined women, Muslim or not, who rebel against conventional practices and establish their own identity, despite being veiled. One of the most prominent scenes in Persepolis is when Marji stands up in class to argue with her religion teacher, accusing her of telling lies about the Islamic Republic.”

Reyns-Chikuma: “North American comics have a history of caricature that is often racist and sexist. There’s a whole tradition of misrepresenting non-white people as villains and women as helpless. Books like Persepolis undercut those caricatures and are closer to a multicultural reality. The book criticizes both Western and Eastern perspectives for stereotyping the ‘other.’ It’s used in many courses in universities in Canada, the U.S., Europe and beyond.”

Lazreg: “Historically speaking, the East and West have looked at one another through flawed lenses. The idea of Muslim women as victims of their own culture has long been the primary lens for Western media, policymakers and the public to understand and engage with Muslim societies. With Persepolis, you get to see the story from locals—you are getting authentic presentation from people in the region. In other words, alternative perspectives. The Middle East is a complex area and you can’t paint it with a single brush. You have to be aware of the many socio-historical, cultural and religious characteristics to be able to represent it authentically.”

Q: What other graphic novels by women authors from the Middle East can we check out?

Jam and Yoghurt by Lebanese author Lena Merhej, is the story of the protagonist mother who is originally from Austria, married a Lebanese, and adapted to Lebanese life while keeping roots with her native country.

Ms. Marvel by G. Willow Wilson, a converted Muslim-American writer and her

editor, Sana Amanat, tells the story of Kamala, a teenager who likes comics and admires the typical blond WASP Ms. Marvel, but also loves her parents who have different expectations for her, and tries to negotiate her identity between the two.

RC: It shows how you can be Pakistani-Muslim and American, and a good citizen, locally, nationally and internationally.

--A Game for Swallows: To Die, To Leave, To Return (Mourir Partir Revenir, Le jeu des

hirondelles) by Zeina Abirached, this graphic memoir in black and white presents the author’s everyday life in war-torn East Beirut.

--Bye Bye Babylon: Beirut 1975-1979 by Lamia Ziade, provides an account of the first five years of the Lebanese civil war while trying to explain who were the belligerents and politicians involved and how her family lived through those years.

--Qahera by Deena Mohamed, is the Arab Muslim adaptation of Catwoman, a Hijab-wearing Egyptian superheroine who fights sexual harassment and Western prejudices about Muslim women. Her name in Arabic means both the conqueror/vanquisher and Cairo, the capital of Egypt.

--Baddawi by Leila Abdelrazaq, is the story of a young boy named Ahmad who was raised in a refugee camp in northern Lebanon. In this graphic novel, Abdelrazaq explores her father’s childhood in the 1960s and seventies from a boy’s point of view as he witnesses the world

crumbling around him and attempts to move forward and build a future for himself.

--Dare to Disappoint: Growing Up in Turkey by Ozge Samanci, is about the coming of age of a young Turkish girl who struggles to reconcile her dreams with those set up by her father. As a consequence, she dares to disappoint.

--Nylon Road by Parsua Bashi, is a present-day graphic memoir about the author’s struggle to find a good job and learn German, after leaving Iran for Switzerland. The author has been struggling in Zurich since 2004, but refuses the idea of going back to Iran. The heroine-protagonist debates with a ghost, a younger version of herself, about the (dis)advantages of both cultures.