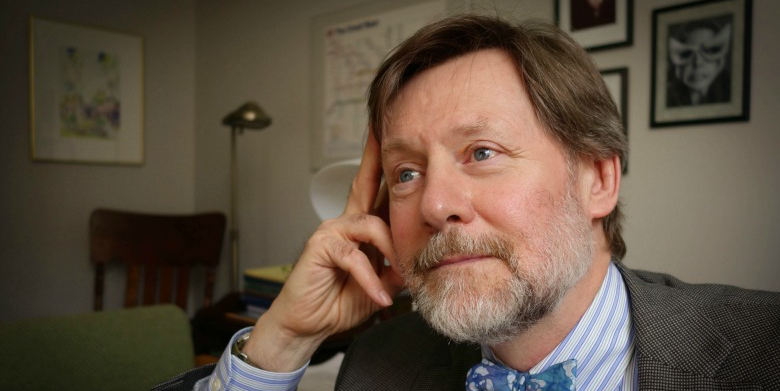 Philosophy professor Robert Burch will deliver the Last Lecture April 9 after being chosen by thousands of current and former students. (Photo: Geoff McMaster)

(Edmonton) Robert Burch asks if we can meet in person. He doesn’t like phone interviews, claiming, “I don’t present myself to best advantage.”

Whether or not that’s true (one suspects it isn’t), the philosophy professor does present himself exceptionally well in the classroom, at least according to the thousands of former students who cast more than 8,000 ballots in the recent Last Lecture competition.

Burch came out on top after some 4,600 people cast more than 20,000 votes in 16 days, beating out David Begg of medicine and history professor Linda Kerr in the final heat. Both former and current students were asked to vote for their favourite instructor, charged with answering this question: “If this were your last time to address a group of students, what would you say to them?”

Burch will present his talk to a sold-out lecture theatre on April 9.

The best part of the competition thus far, he says, is that former students have contacted him from around the world after hearing about it through social media.

“I was starting to get a little full of myself,” he says. “Some of the people who emailed were students back in the 1980s, and so I had a Goodbye Mr. Chips moment,” he adds, referring to the 1969 film which, in its final scene, depicts generations of students saying goodbye to their beloved instructor.

"I was really happy when people who I never expected voted for me, or people who I thought didn't like my classes or seemed at the time like they were only pretending they did."

The effusive praise of Burch’s teaching that poured in from around the globe is truly impressive, ranging from statements such as, “He lets us think we are capable of reaching the same enormous conclusions as those discovered by history's greatest thinkers” to, “His mastery of contemporary philosophy, history of philosophy, and literature means that he is what one may call a prophet: one who has insights into his times.”

One student remarked, “He's brilliant. And weird. And after one of his classes, I feel like I've not just learned something new, but an entirely new way of thinking.”

The Last Lecture is organized by Alumni Relations in partnership with the Students’ Union and the Centre for Teaching and Learning. It was inspired by the famous prototype delivered by Carnegie Mellon University professor Randy Pausch in 2007. Pausch gave an upbeat, inspirational talk full of life lessons, called “Achieving Your Childhood Dreams,” after learning he had terminal pancreatic cancer.

But don’t expect anything like that brand of self-help optimism from Burch. "I know what I don't want to do, and that's the Randy Pausch lecture,” he says. “I didn't really know about it until this thing got off the ground, but I looked at it online and said, 'This is just not me.’ If my students saw that, they would think I was making some sort of point in a joking way, through parody."

He can’t disclose what he’ll talk about, mainly because he doesn’t believe in scripting his lectures, preferring to jot down half a dozen main points just to keep himself on track.

"When I lecture, I tell a story. I have an opening and a plot to develop, and it should by the end come to some sort of conclusion that will lead to the next day’s lecture."

He does know, however, that he’ll likely comment on what it means to be a philosophy professor, "charged with this strange task, which I think is undoable and unintelligible, which is to teach people how to think.

“The idea we use to sell philosophy, that I can teach you to think or think critically, actually turns out to be the opposite of what philosophical thinking is. Providing answers to logically coherent philosophical questions is really the easiest thing in the world to do,” he says, especially for smart people, whom he distinguishes from those with a genuinely philosophical disposition.

When it comes to advice, Burch may discuss his own career and the challenge of pursuing his discipline in the academy, which tends, in his view, to value smart thinking over philosophical thinking. For inspiration, he will turn to Thus Spoke Zarathustra.

In Friedrich Nietzsche’s 19th-century novel, the ironic prophet gives his last lecture to his disciples, telling them, "Well, you found me. You believe in me, but what does that matter. Now you have to find yourself."

The Last Lecture will take place April 9 at 7 p.m. in room 1-430 and the PCL Lounge in the Centennial Centre for Interdisciplinary Science.