Li Du faced an uphill road to convocation, but with two professors on his side, he is now UAlberta’s second student ever to earn a PhD in law. 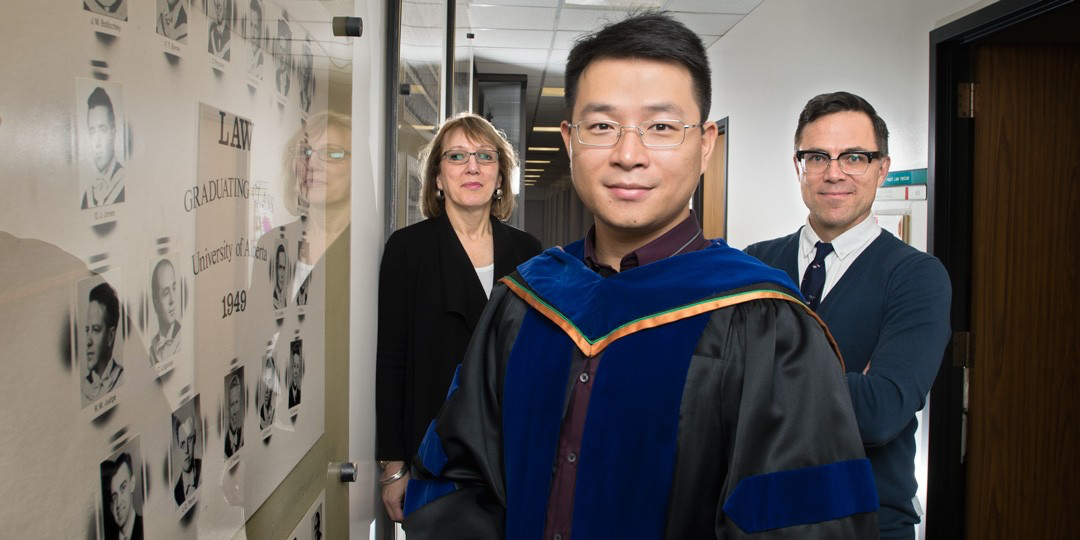 (Edmonton) Li Du describes his road to convocation as a long journey. As only the second student to receive a PhD from the University of Alberta’s Faculty of Law, he faced challenges assimilating to a new culture and climate, sometimes compounded by the feeling he was travelling in uncharted territory. He credits the mentorship of his supervisors for helping him reach his destination.

“Because Sarah [Hamill, who graduated in June of 2014] and I were the first two PhD students, there was no one farther along in their PhD I could talk to about the program,” Li recalls. “There were mandatory courses and we had to take a candidacy exam—it was all so new to me and I was a little overwhelmed. But my supervisors were so supportive and encouraging, it gave me courage.”

Li’s path to the U of A started at Wuhan University in his native China, where he completed undergraduate degrees in medicine and law, and a master’s degree in international law. Though motivated to continue his studies, he also felt the need to broaden his horizons. Based on the international reputation of the U of A’s Health Law Institute, Li reached out and was encouraged to apply to the recently founded PhD program by institute director Timothy Caulfield, who would become his co-supervisor with Professor Linda Reif. Li adds that funding from the Chinese Scholarship Council and the U of A Faculty of Law made the pursuit of his PhD possible.

Li says his first days in Alberta back in 2009 brought challenges like finding a place to live and overcoming the language barrier. But the nature of his academic path amplified some of these challenges.

“I’ve been educated for more than 10 years in English, but I still found the way people actually use words is different. And because this is law, not natural science, you need to use language to accurately describe an argument,” he says. “The work is a bit isolating—I was the only person in the faculty doing this kind of research. My supervisors helped keep me on the right track.”

Nor was Li’s homesickness entirely typical. His wife, whom he married in 2010, continues to live in China. And though he says his supervisors have been very supportive of his return trips to visit, the couple have only seen each other every few months since they wed.

“I have also worked closely with the Health Law Institute on several cool projects related to stem cell research,” he says. “I feel lucky I chose these topics because, in the five years I’ve been studying, the controversy around these topics has only grown. These are global hot topics.”

Reif says that even though the Faculty of Law grad program’s small size allows for lots of interaction between supervisors and students, Li worked very hard on his own to improve his English, pursue his thesis work and get involved in the research activities of the Health Law Institute.

“Li certainly made the most of his experience here,” she says. “He’s very much a self-starter.”

"Li was not only a great student, he is a terrific colleague and member of our research team,” Caulfield adds. “He welcomes any and all challenges and has a real gift for interdisciplinary work. A bright future awaits."

Li says he even found a bright side to Edmonton’s winters, which were longer and colder than he expected.

“Sometimes the cold helps you calm down. If you’re full of emotions or you’re feeling depressed, once you get outside and take a deep breath, it helps to clear your head and you can get back to work,” he says. “After a couple of weeks visiting my wife in China, I would find myself thinking about Edmonton and how quiet and comfortable it was to do research here.”

Li’s positive outlook extends to his prospects after convocation. While he’s currently looking for a position in China, he believes his time studying in Canada will serve him well.

“I’ve noticed over the past few years there have been increasing collaborations between Canada and China, and I think that will continue, so within the next decade there will be a lot more co-operation between the two countries. I think, because of my experience, I will be able to contribute to that collaboration.”