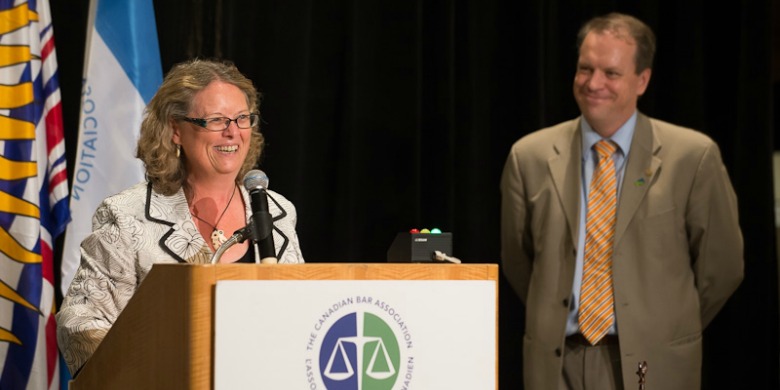 (Edmonton) University of Alberta law professor Catherine Bell has been recognized by the Canadian Bar Association with a nationally prestigious award for her outstanding contributions to legal scholarship in Canada.

The Ramon John Hnatyshyn Award for Law, established in 1993 by the then governor general of Canada, acknowledges Bell’s innovative research and teaching of Aboriginal law, and the profound impact her work has had in the everyday lives of Aboriginal people.

“Professor Bell is an exemplary scholar who is considered a pioneer in the field of Aboriginal law,” said Trinda L. Ernst, president of the Canadian Bar Association. “Her innovative research and teaching has had a profound impact on not only the study and practice of Aboriginal law, but also on the everyday lives of Aboriginal Peoples.”

“This is a significant honour to me personally, and also for those of us who work in the field of Aboriginal legal issues, to have work and scholarship in the area of Aboriginal Constitutional rights be given national recognition,” said Bell. “The value and utility of my work is not just the result of my efforts, but also of those who have worked collaboratively with me on indigenous rights.”

“This award recognizes Catherine Bell’s exceptional contribution to the study and practice of Aboriginal law in Canada,” said Philip Bryden, dean of the U of A’s Faculty of Law and one of Bell’s nominators. “Professor Bell is a valued colleague who brings to the University of Alberta’s Faculty of Law exceptional breadth and depth of experience as an academic, and lawyer, in the field of Aboriginal law, and is renowned for her dedication to legal education.”

A law graduate of the University of Saskatchewan and the University of British Columbia, Bell has dedicated her career to the study and teaching of Aboriginal law. Her work has concentrated on collaborative legal research, the legal protection of First Nations heritage and culture, and Métis rights.

As a law professor at the U of A, Bell specializes in Aboriginal legal issues, dispute resolution, property law, cultural heritage law and interdisciplinary community-based legal research. Bell describes her work as trying to understand the diverse legal systems present in Canada—helping to interpret indigenous law surrounding cultural artifacts for Canadian museums, training Aboriginal lawyers to understand the relationship between their laws and the Constitution, and encouraging Aboriginal groups to use their own legal traditions in self-government.

She was a founding faculty member of the Akitsiraq Law School for Inuit students in Nunavut, which caters to mature students—leaders in their communities whose families and mortgages prevented them from training in southern law schools. For several years she also served as a lead faculty member for the Banff Centre for Management’s Aboriginal Leadership and Self-Government Program.

She is published widely on Métis and First Nations legal and policy issues and has acted as an advisor to First Nations, Métis and Canadian government organizations. She is also the author of two books on Alberta’s Métis settlements.

In her research, Bell engages students from the University of Alberta and from abroad. Her current research includes a legal history project on Métis constitutional rights in Alberta (with Nathalie Kermoal) funded in part by the Province of Alberta and the Social Sciences and Humanities Research Council of Canada, and a major international research initiative on intellectual products of cultural heritage, including rights and interests of indigenous peoples.

The award was presented Aug. 11 at the Canadian Bar Association Council Awards Luncheon in Vancouver.