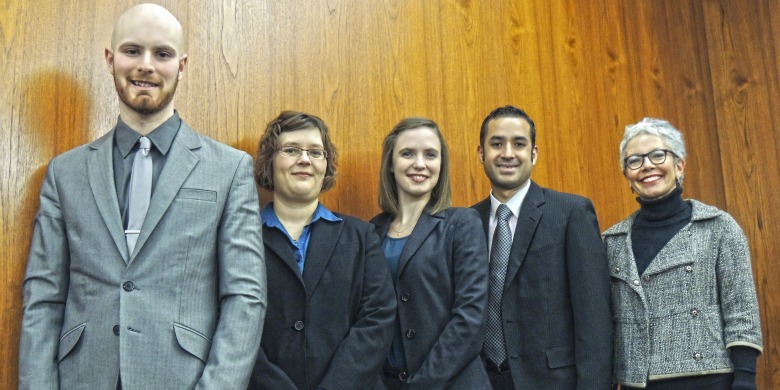 (Edmonton) The time and place couldn’t have been better for a team of University of Alberta law students to win a prestigious national competition.

On March 2, the U of A Laskin Moot Team won the 2013 top school prize in the Laskin Memorial Moot Competition, Canada’s only national bilingual moot. About 18 of Canada's 21 law schools participate in the Laskin each year, taking turns hosting the competition.

The victory was especially sweet for the U of A team because it marks the first win for a Western Canadian law school since the competition started in 1986. It also comes during the Faculty of Law’s 100th anniversary—and it happened on home turf, as the U of A was the host team.

The team included third-year law students Kathy Drouin-Carey, Francisco Marquez-Stricker and Leah McDaniel, and second-year student Pablo Retamozo. The team was coached by Patricia Paradis, executive director of the Centre for Constitutional Studies in the Faculty of Law.

This year’s problem was an appeal from the Federal Court of Appeal to the fictitious Canadian Court of Justice on the issue of re-litigation of a human rights issue that had already been decided by a labour arbitrator.

Drouin-Carey stepped up to the plate to write and argue in French, a requirement for one member of each team in the bilingual moot. “I think I gained a lot of confidence in oral advocacy, particularly as I was doing it in essentially my second language,” she said of the experience. “I really managed to improve my French skills and gained much more confidence socializing and interacting in French. I also improved my research and writing skills quite a bit.”

McDaniel also said the moot helped her gain skills and knowledge, describing it as “an invaluable learning experience—we had the opportunity to delve deeply into a legal issue in a way that is unparalleled in other courses in law school. We were able to get feedback on our oral advocacy skills from a number of professors, judges and practising lawyers. I learned a lot about effective written and oral advocacy, and I will be able to take that learning forward into my law career in the future.”

Paradis noted that the team had to overcome several challenges early on. One initial member had to drop out for personal reasons and a replacement had to be recruited. Then another broke his writing hand, and a third had to be hospitalized for two weeks after an appendicitis attack.

“The team performed solidly and effectively throughout the competition and they are all, most deservedly, elated,” said Paradis. “This group worked extremely hard and extremely well together and they have a great deal to be proud of—as does our school.”