Professor of literature, philanthropist to be honoured at special ceremonies in China this fall. 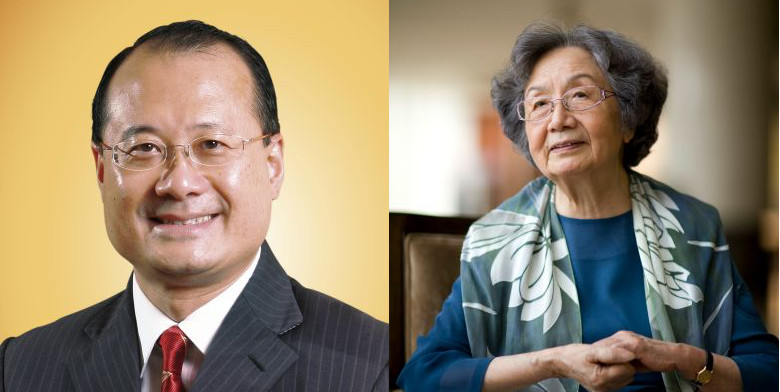 (Edmonton) Two outstanding leaders in Chinese culture and business will receive honorary degrees from the University of Alberta.

Florence Chia-Ying Chao-Yeh, a professor and scholar of Chinese poetry and literature, and Jonathan Choi Koon-Shum, a leading business entrepreneur and philanthropist, will be awarded honorary degrees in ceremonies in China this fall, for outstanding contributions in their respective fields.

"It is both an honour and a privilege to be celebrating two outstanding individuals whose contributions to scholarship, education and leadership set an inspiring example for our university community,” said U of A chancellor Ralph Young.

“These special conferral ceremonies held in Tianjin and Hong Kong also offer us a wonderful opportunity to reflect on the depth and breadth of our University of Alberta connections in China including vibrant alumni communities, a range of important institutional partnerships and a long-standing relationship with the China Scholarship Council and the Ministry of Science and Technology of China," Young said.

Jonathan Choi Koon-Shum is a respected, successful business leader in Hong Kong who is also deeply committed to philanthropy, particularly in the fields of education and technological development in China and abroad.

As chairman of the successful Sunwah Group, Choi is a trusted business voice whose advice is valued by political leaders in mainland China and Hong Kong. Through his commercial leadership and extensive business experience, Choi has managed the growth of his company from its beginnings in seafood processing to a multinational corporation with investments in real estate, financial services, technology, media and infrastructure.

Choi has contributed to the business community by serving with key economic institutions and committees in China, and in this role has advocated for small and medium business opportunities in mainland China and Hong Kong, as well as promoting trade collaborations and good relations between China and other countries including India, Israel, Korea and Canada.

With firm ties to the community, Choi is also committed to giving back through the charitable Sunwah Foundation, which was established to direct numerous philanthropic endeavours in education, technology and the arts. Choi and his family have donated $25 million to charitable causes. Along with scholarships and funding for new facilities at universities in China, Vietnam, the United Kingdom and the United States, the foundation has also provided support for research centres and schools that seek to develop and implement innovations in education.

Choi’s generosity and ongoing dedication to education has been recognized by the Hong Kong government, Chinese and foreign universities, and other organizations.

Yeh is one of the most influential scholars and educators of Chinese classical poetry in the Western world. Along with producing a large body of work comprising more than 600 poems and 40 books, she has trained and inspired generations of students who have gone on to become leading scholars and experts in Chinese culture. Since 1993 she has served as director of the Institute for Chinese Classical Culture at Nankai University in China, a key partner university to the U of A. Yeh is dedicated to promoting appreciation of Chinese classical poetry among her students, emphasizing its inherent beauty, grace and subtle meaning. In particular, her efforts have revived scholarship surrounding ci poetry, a form of Chinese lyric poetry considered to be exceptionally challenging to interpret and master.

Yeh’s efforts to promote appreciation of classical poetry studies have resulted in their inclusion in Chinese high-school curriculum, and she has donated half of her pension fund to establish a scholarship for classical literature studies at Nankai University.

As well, through her exposure to Western academia, including a visiting professorship at Harvard University and two decades spent teaching literature studies in Canada, Yeh has extended the understanding of traditional Chinese cultural works to the West and incorporated Western theories in her studies of Chinese poetry. She continues to travel between Canada and China to conduct lectures and share her knowledge with students.

Her achievements have been recognized widely by groups and individuals, including former Chinese premier Wen Jiabao and the Royal Society of Canada.