I believe we are born with an innate desire to create, to discover and wonder about things that are bigger than us, in whatever way we can.

Two leading professors received one of the University of Alberta’s highest honours for their commitment to their students, their work and their communities.

Professors Olive Yonge of the Faculty of Nursing and James Pinfold of the Faculty of Science were named Distinguished University Professors by the U of A. The award recognizes their outstanding distinction and scholarship in research, teaching and service to the academy and to the community. Yonge and Pinfold were among top faculty, students and staff recognized at the U of A’s annual Celebrate! Teaching. Learning. Research. event at the Myer Horowitz Theatre Sept. 21.

Stepping up with leadership 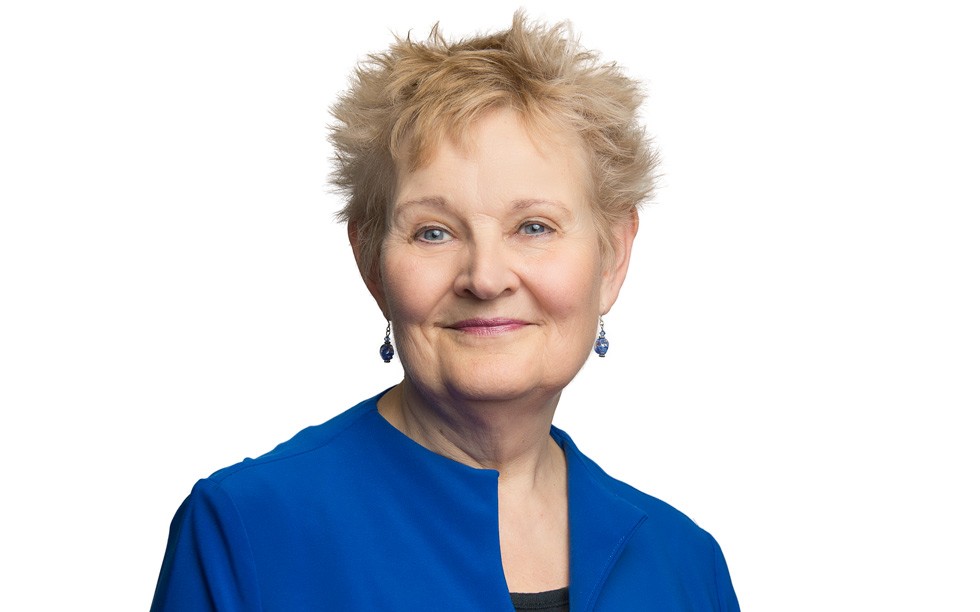 Raised in a service family where giving was a way of life, Yonge lives by her mother’s words: “If you have two of anything, give one away. Don’t hoard ideas, power or time. Give it away.”

Throughout her 36 years of service on campus, Yonge has given freely of her time and knowledge as a leader, whether she is teaching and supervising nursing students, conducting research, serving her profession in various committees or serving in several administrative positions on campus, including as the university’s vice-provost, deputy provost and interim provost.

“You step up and do what you can do,” she said. “My philosophy is to leave a place better than I found it.”

Yonge earned a BSc in nursing from the U of A in 1974, followed by a master’s degree in educational psychology and later, a PhD, both from the Faculty of Education, reflecting a rounded approach to learning. Over the years, her work has been recognized with several awards, including a 3M National Teaching Fellowship, the university’s Rutherford Award for Excellence in Undergraduate Teaching and a Vargo Teaching Chair. She’s served on more than 30 committees and co-chaired several task forces on campus.

Through all of Yonge’s service runs a common thread of leadership—a key driver in everything she does.

“I value the work that underlies leadership: the principles of governance, the role of policies, working on teams. The rewards are seeing a team accomplish things I couldn’t do on my own, from establishing a scholarship to developing a pandemic plan. Leadership is a form of citizenship.”

The final research project she is focusing on before she retires—her legacy project—is the meaning of courage in leadership. The project includes interviews with 84 women on what they have to say about emotional, moral and ethical courage, with the ultimate goal of building their capacity and developing more female leaders. Yonge wants to leave them with a set of empowering skills. “What are we doing for females in the public sector? How can we teach emerging leaders to be great? If we give them a toolbox, it’s better for them.”

Being named as a Distinguished University Professor is a particular honour for her, she added. “I was pleased that, as a female, I was chosen for this award.”

Besides her research and administrative work, teaching is also a passion for Yonge. Using an assortment of people-friendly methods ranging from a summer book club to writing retreats, Yonge enjoys creating unusual ways of sharing knowledge, whether in faculty development or student courses. Even the basic things matter to her. One nursing leadership course she runs includes a simulation of how to run an effective meeting. The model has been adopted by the Students’ Union and served her well during her own time in the provost’s office.

“I love a good meeting. It starts and ends on time, but after the meeting, people stay and talk. They don’t want to leave the intellectual debate, the successful resolution of the conflict.”

She’s also pioneered research and, with a former graduate student, co-wrote a book on nursing preceptorship, a one-on-one teaching and learning approach that sees registered nurses instructing students in their specialized areas. Yonge saw the practice happening in the medical profession and thought it would translate well to nursing.

“With the specialized instruction, nursing students learn as much as they can, hone their skills and emerge as professionals who are confident and competent.”

As she reflects on her three decades on campus, Yonge feels blessed to be a U of A leader and educator. “The vitality, the creativity we have in academia—there is no other place like it and I feel so privileged to be here.” 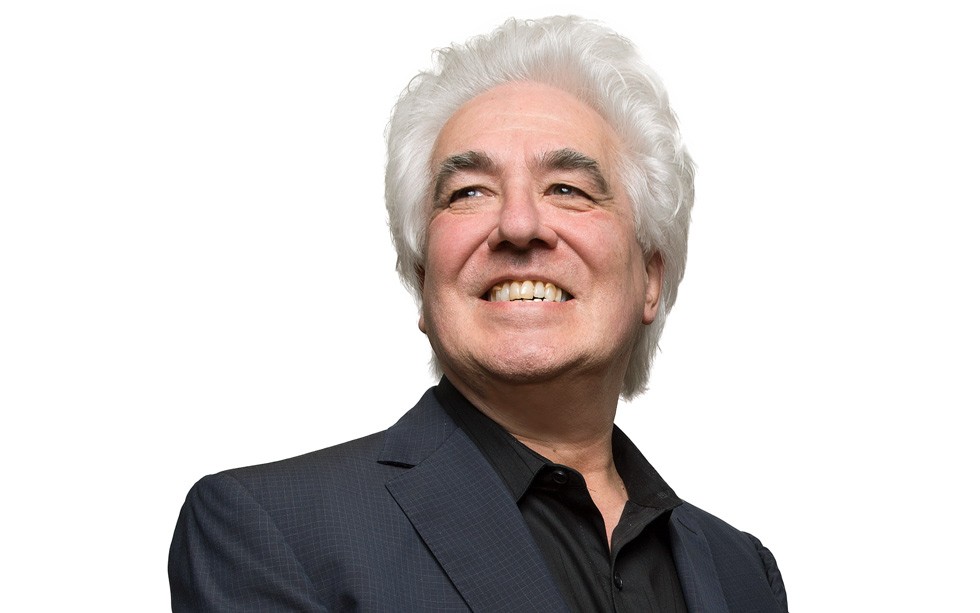 James Pinfold was 10 years old when he visited the London Planetarium on Baker Street for the first time. The sight of the night sky glittering with stars, away from the glare of his native city’s streetlights, sparked his young imagination and led to a lifelong scientific career exploring the secrets of the universe.

“You could say Baker Street was my road to Damascus,” Pinfold said. “I was absolutely flabbergasted—the sky was full of stars, clouds of stars. It was a complete revelation.”

Fascinated first by astronomy, Pinfold eventually chose to study particle physics, “exploring the microcosm, the world within this one.”

As an internationally renowned particle physicist, Pinfold has probed the science of existence for 40 years, including as a researcher and teacher in the Faculty of Science. Success came early for him as a graduate student in the ‘70s. He became a leader in discovering the first hard evidence for the unification of the weak and electromagnetic fundamental forces, which serves as the central pillar of a standard model for particle physics today.

Pinfold joined the U of A science faculty in 1992 to lead an initiative in particle physics, continuing work he’d done on the Large Electron Positron (LEP) collider at the European Organization for Nuclear Research (CERN), in Geneva, Switzerland. There, he was part of a team that confirmed there are only three types of light neutrino, a type of particle. It was at LEP in 1986 that he became the youngest ever leader of an international experiment, MODAL, designed to search for new physics.

Pinfold also became a founding member of the ATLAS experiment, operating at the Large Hadron Collider—the highest-energy accelerator ever built—situated at CERN. In 2012, he played a key role in the discovery of the Higgs boson. The breakthrough on the theoretical particle, thought to be a fundamental piece of the DNA of the universe, confirmed the prediction of British physicist Peter Higgs, who received the Nobel Prize a year later.

As leader of the newest Large Hadron Collider experiment, MoEDAL, Pinfold is now committed to the quest for physics beyond the standard model and the search for answers to big questions. “How did the universe begin and why is there something rather than nothing? You feel you are searching for knowledge of the most fundamental kind.”

His research has garnered him numerous awards over the years, including medals from the European Physical Society, a J. Gordin Kaplan Award from the U of A, as well as teaching and research awards such as Killam and McCalla professorships.

He’s also earned recognition from the Royal Society of London and Alberta’s ASTech Prize for pioneering outreach work that extends his knowledge beyond campus into high-school classrooms. “I want to create a sense of wonder, of the mysterious, and it’s important to start that process as early as possible at the high-school level.”

Passionate about education through mentorship and direct student involvement in the excitement of fundamental research, he has admitted a high school in the United Kingdom to the MoEDAL project and is working on a “citizen science” initiative to involve the public in analyzing data coming from that research.

“We are not here just to simply eat, multiply and die. I believe we are born with an innate desire to create, to discover and wonder about things that are bigger than us, in whatever way we can.”

It’s a philosophy that he feels is reflected in the U of A’s approach to discovery, and the reason he’s proud to be named a Distinguished University Professor.

“The good universities and institutes can be recognized by the strength of their commitment to teaching and research excellence. But to me, the hallmark of a great university is that it commits wholeheartedly to conducting fundamental research and asking the big questions. The University of Alberta is such a place.”