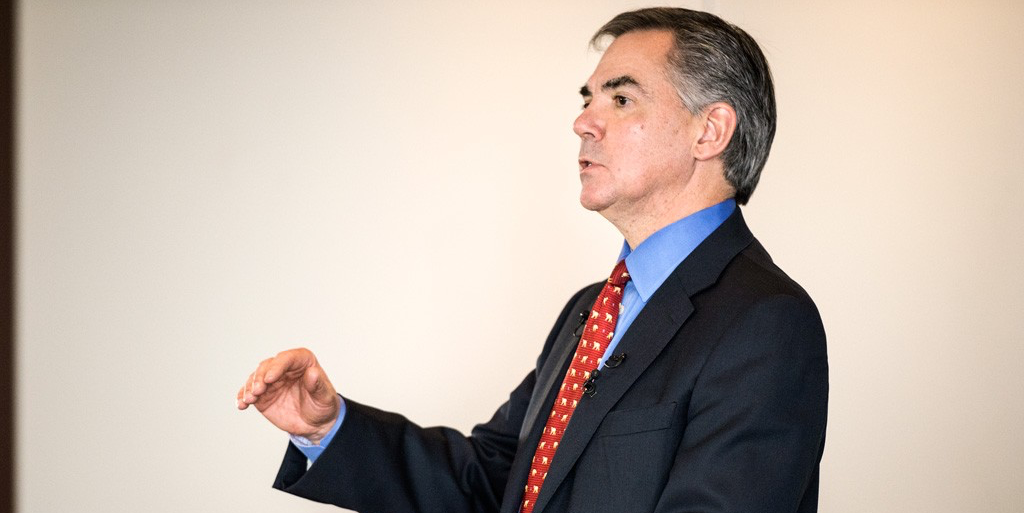 (Edmonton) As leaders of tomorrow, University of Alberta business students should be looking to build opportunities that will help their province grow in the tough economic years ahead, said Alberta Premier Jim Prentice.

Speaking to a crowd of 200 Alberta School of Business faculty and students March 24 as he prepares to deliver the 2015–2016 budget later this week, Prentice urged students at his alma mater to “exercise their leadership” and help Alberta meet the challenges wrought by a drastic drop in oil prices. “Leadership, more than anything else, will determine our future and our success as a province. The future is in good hands when I look around this room,” he said.

Prentice, who graduated from the U of A’s business school in 1977 with a bachelor of commerce and received an honorary doctor of laws degree in 2013, went on to a high-level career as a member of Parliament, cabinet minister and corporate leader before taking on the province’s top job in 2014. He credited his U of A education for some of that success.

“Much of the opportunity I’ve had in life came from that,” he said, calling the U of A an “incredible school,” and noting that its MBA program is among the top four per cent worldwide.

Despite the economic challenges of a $7-billion budget gap faced by the province this year, preserving Alberta’s opportunity for future generations is one of his priorities, he told his young audience. “The decisions we make now will shape our future path. My choice is to set up future generations for success.”

Already strengthened with a well-educated young population, a stable free market and the world’s best resources, Alberta is “well positioned for success,” Prentice said, but has not yet achieved its full potential, relying too much on rollercoaster oil revenues. Touching on his vision for the province, Prentice noted that Alberta has resources that the world wants, and needs a bold strategy as well.

Noting the 200th anniversary of the birth of Sir John A. Macdonald, Canada’s first prime minister, Prentice praised his vision for building the country, and warned that it must be preserved and honoured in how Alberta moves forward. “He had an unwavering commitment to the welfare of Canada. It’s important to be grateful to people like Macdonald, but we have to be vigilant as well to not become complacent about what we have. We have to capitalize on our strengths, guard against timidity.”

He advised the students to dream big, be ambitious and “don’t be trapped by orthodoxy” as they move into the business world.

Emphasizing the importance of securing a strong future economy for Alberta, Prentice listed several areas of diversification that thrive here, including energy, forestry, agriculture, tourism—and universities and colleges, for the valuable research being conducted.

The provincial government will continue to work with industry partners and universities, “just as we are already doing at the U of A” in innovative fields such as hydrocarbons, petrochemicals, cement, fertilizers and heavy manufacturing, all to build the economy, he said.

“The University of Alberta has already contributed so much,” Prentice added, noting that the university was established right after the province got its beginnings more than 100 years ago, “and we should not forget that.”

He also expressed his commitment to post-secondary education, noting a “sustainable funding model” is needed for universities and colleges, to keep them accessible and affordable for students. “There’s work to be done on that.”

In closing, he expressed confidence that while the budget problem won’t be solved in one year, “we can shape how we respond to challenges and we will get through this together.”