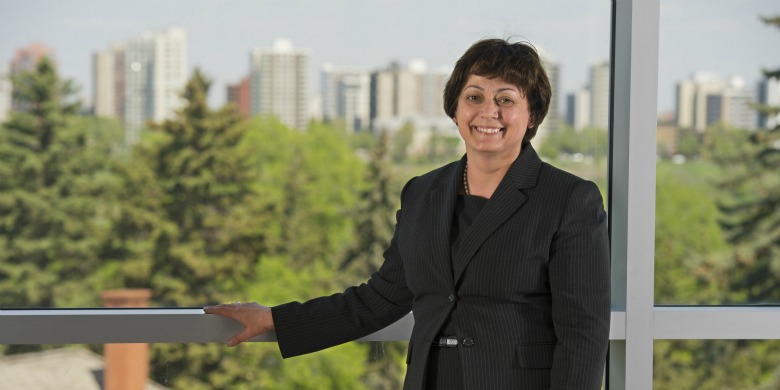 120531-mariediorio-banner
Marie D'Iorio is the new executive director of the National Institute for Nanotechnology.

(Edmonton) An expert in nano-electronics will lead Canada’s National Institute for Nanotechnology (NINT) into its second decade. The institute’s governing council has named Marie D’Iorio as its new executive director. Trained as a physicist, D’Iorio has expertise in nano-electronics. She had been acting as NINT’s interim director general since last year.

“I am delighted to welcome Dr. Marie D’Iorio to NINT and the University of Alberta,” said Indira Samarasekera, president of the University of Alberta. “She is a remarkable leader who has, over the decades, had a prominent role in the science and technology sector, both nationally and internationally. I am thrilled that she will be focusing her time, energy and talents here as the executive director of NINT, and as professor of physics and assistant vice-president of research at the U of A.”

“Nanotechnology can help Canadian companies be more competitive and NINT is key to them finding the right applications for their sector,” said John R. McDougall, president of the National Research Council of Canada. “Marie D’Iorio’s mission is to expand NINT’s engagement with Canadian industry and help them benefit from the potential of small tech.”

Marie D’Iorio joined the National Research Council in 1983, where she established the first very-low-temperature, high magnetic field laboratory in Canada to study low-dimensional electron systems in semiconductor heterostructures. She served as director general of the council’s Institute for Microstructural Sciences from 2003 to 2011.

“The National Institute for Nanotechnology proves that collaboration is a valuable cornerstone of Alberta’s nanotechnology strategy,” said Stephen Khan, Alberta’s minister of enterprise and advanced education. “With the support of our federal and academic partners at NINT and Dr. D’Iorio’s focus on collaboration with industry, we can build on our province’s nanotech capabilities and open even more opportunities in this field.”

The National Institute for Nanotechnology is Canada’s leading research and technology development organization working at the nano scale. Founded in 2001, it is a joint initiative of the National Research Council of Canada, the University of Alberta, the Government of Alberta and the Government of Canada. Its mission is to transform nanoscience ideas into novel, sustainable nanotechnology solutions with socioeconomic benefits for Canada and Alberta.