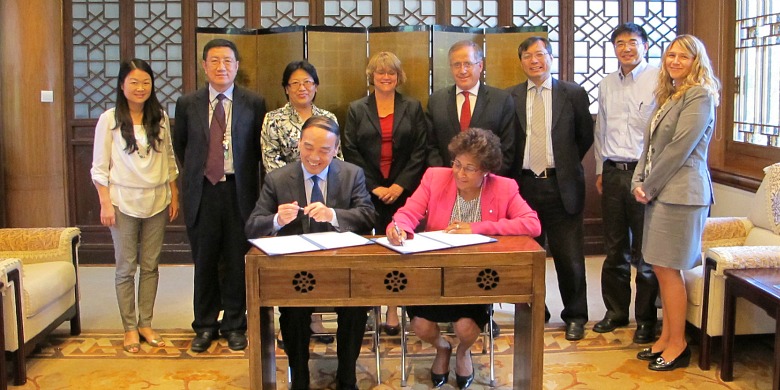 U of A president Indira Samarasekera and Si Yuan, provost and vice-president of Tsinghua University, sign an agreement to create the Sino-Canadian Energy and Environment Research and Education Initiative (SCENEREI).

(Edmonton) Solving some of the pressing problems the world faces today can no longer be the preoccupation of a single individual, institution, government or nation. With that in mind, the University of Alberta is laying international foundations for the necessary structures to produce solutions to two global challenges: energy and the environment.

U of A President Indira Samarasekera and Si Yuan, provost and vice-president of Tsinghua University, recently signed an agreement in Beijing, China, that creates the Sino-Canadian Energy and Environment Research and Education Initiative (SCENEREI). The agreement positions two leading universities from different parts of the world to contribute through research, and subsequent development of innovative and efficient technologies, that will help address global issues on energy and the environment.

“The environment is one of the most challenging problems facing the entire planet,” said Samarasekera. “This agreement will allow additional focus on this important topic from a number of disciplinary perspectives. Seeking out forms of sustainable energy is a global activity that becomes more important each year.”

Lorne Babiuk, U of A vice-president of research, says the initial agreement between the two universities focused on energy but that it has since extended to include other disciplines such as business. He underscores the importance of a global approach, which this agreement exemplifies, in finding solutions that benefit all people.

For example, scientists, governments and industry are pressed for technologies that would contain the release of large quantities of carbon dioxide into the atmosphere. One solution researchers are collaborating on is the capture, transport and storage of carbon underground. This solution, which would help ensure efficient resource extraction, would also help solve an important environmental issue.

In taking on that responsibility, the university makes it a priority to work with strategic institutions, governments and others around the world, both by creating networks and by joining them. For instance, this agreement results partly from a relationship the university established a few years ago with Tsinghua through which students from that university come and study at the U of A. But for Tsinghua to choose the U of A as one of its five key global partners is a mark of a different kind, says Babiuk.

Working with the best

“The Chinese are very conscious of and know where universities are in the hierarchy. And they aren’t necessarily enamoured by a long history of reputation, which may be dwindling,” he said. “They’re interested in where you are you today. They see the U of A rising very rapidly in overall international reputation. And clearly Alberta is an energy province, the engine of a Canadian energy environment. The U of A has leadership in energy, from extraction to welding technologies to water usage; the entire spectrum is being done here. The Chinese are status-conscious as well, so they want to make sure they work with the best.”

Working with the best is also important to the U of A, says Cen Huang, who through University of Alberta International, was instrumental in the agreement.

“In science and engineering, Tsinghua is number one in China and also ranks high in all international rankings,” says Huang. “It’s considered as MIT in China; several top scientists and engineers graduated from Tsinghua, and many Chinese government leaders are Tsinghua graduates. So Tsinghua plays a very important role in China, in terms of science, technology, and research and development.”

Individual researchers at both universities, recognizing the compatibility in their research and the U of A’s strategic location in Canada’s resource-rich region, are already working outside SCENEREI in collaborations following from a visit of more than a dozen Tsinghua scientists to the U of A on a two-day workshop earlier this year.

“U of A and Tsinghua University researchers have 15 research projects ongoing, aside of this agreement. And also besides that, an additional six projects have been jointly developed, making a total of 21 projects,” Huang said. “Such agreements are based on needs. We have needs for new technologies to tackle the challenges, and they have huge needs to solve problems in China.”

Through sharing of research facilities, student exchanges and research collaborations, the two leading universities will continue working to produce innovative solutions, while improving the quality of science.

“Over the last number of years, we have been focusing on international partnerships,” said Babiuk. “We don’t have all the expertise, but this gives access to equipment, talent, and additional or different funding mechanisms. That provides us with a greater quality and quantity of research—which then helps benefit the entire global society.”