Learning and laughing about a weighty topic

UAlberta professor takes the stage in the Edmonton Fringe Festival to promote understanding about obesity. 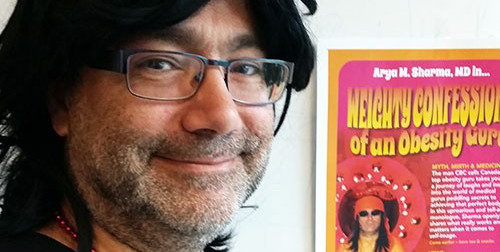 Arya Sharma is starring in Weighty Confessions of an Obesity Guru during the 2014 Edmonton Fringe Festival.

(Edmonton) Arya Sharma loves his day job as one of Canada’s foremost experts on obesity. But for a short time this summer, his night job is providing laughs.

“How do you get the public to better understand this topic?” explains Sharma, a professor in the Department of Medicine at the University of Alberta who works to grow scientific understanding about weight-related issues. “One of the ways is entertainment.”

For seven sold-out shows at this year’s Edmonton International Fringe Festival, Sharma is transforming himself into a very different kind of teacher, performing a one-man show titled Weighty Confessions of an Obesity Guru. It’s a character he’s running with after being given the title in media coverage of his work earlier in the year. According to Sharma, the guru image seemed tailor-made for this year’s 1970s-themed Fringe Festival.

“You’re trying not to take yourself too seriously, and also taking advantage of the kind of thing that the Fringe allows you to do.”

The Edmonton Fringe Festival is the second largest of its kind in the world, attracting an eclectic audience of more than 100,000 each year. Sharma, who also serves as medical director of the Alberta Health Services Obesity Program and scientific director of the Canadian Obesity Network, says the Fringe audience is exactly the kind of diverse crowd he’s hoping to reach.

“It gets the attention of people who normally would not have a lot of interest in this topic. Here at the Fringe Festival, where people are looking for a show, they’ll come out and see it.”

The show itself is offbeat, says Sharma, aiming to entertain as much as it educates—as much about whimsy as it is about weight loss. Still, Sharma says, at its core, his foray into live theatre remains about helping people understand a complex and growing problem. According to the Public Health Agency of Canada, one in four Canadians currently meet the medical criteria for obesity.

“It’s not just ‘eat less and move more’ and we wouldn't have the problem. Anyone who says that does not understand the problem,” explains Sharma. “That’s like telling someone with depression, ‘You know what? You’re not happy. You just need to cheer up.’ Well thank you very much. That’s not going to help me.”

Sharma hopes to debunk weight-loss myths and stereotypes by explaining what really works and matters when it comes to body image. He says the focus needs to turn to pursuing healthy behaviour, rather than a lower body weight. He hopes humour helps get the message across.

It’s not the first time the U of A professor has stepped outside of his academic and clinical comfort zone. This past year he also developed a 90-minute mashup of a stand-up comedy routine and motivational speech, which he took on tour across Canada. And although Weighty Confessions is a far more quirky approach to the topic, Sharma says the goal remains the same.

“If you can get people coming out of the show having somewhat changed their opinions, saying ‘I didn’t know that’ or ‘I never thought of that,’ and the next time they see someone who has a weight issue, that they look at that person slightly differently just because they’ve been to the show—I think I would be very happy and very satisfied. It is a change in perception.”

Learning and laughing about a weighty topic
Newsroom