Learning from a Nobel laureate

When the winners of this year’s Nobel Prize in Chemistry were announced, Scott Irvine couldn’t help but smile—one of them was his former boss. 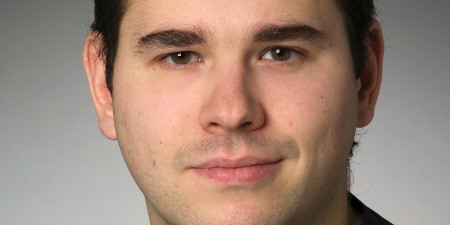 Engineering alumnus Scott Irvine was a co-author on two research papers with Stefan Hell, one of three winners of this year's Nobel Prize in Chemistry.

(Edmonton) When this year’s Nobel Prize in Chemistry was announced, Scott Irvine couldn’t help but smile. His former boss, Stefan Hell, was named one of three co-winners of the coveted prize.

Hell and co-laureates Eric Betzig and William Moerner were awarded the prestigious prize for their work in developing technology that allows researchers to “see” objects at the nanoscopic scale—and even to observe the inner workings of cells.

“It’s quite exciting. I feel somewhat honoured to be able to say that I worked in his lab,” said Irvine, who earned his PhD in engineering physics at the University of Alberta in 2007.

Hell worked independently on the project for years at the Max Planck Institute for Biophysical Chemistry in Göttingen, Germany. He and his team overcame what had been considered an insurmountable barrier for optical microscopes—devising a way to see objects smaller than a light wave. Conventional light microscopes are unable to view objects separated by less than 200 nanometres because of the wave nature of light, making them appear as a single object. This phenomenon, called the diffraction barrier, was discovered 130 years ago.

The discovery’s impact will be felt across a wide spectrum of research areas, including medical and materials research.

“In biology it is all about being able to see what is going on in structure–function relationships. That is, it helps people determine how structure affects the way something functions.”

After earning a bachelor’s degree from the University of Lethbridge with a double major in physics and math, Irvine decided to pursue an engineering degree to improve his employment prospects. After securing funding from the Natural Sciences and Engineering Research Council, he received a letter from U of A electrical engineering professor Abdul Elezzabi, asking whether he’d be interested in photonics research. After touring Elezzabi’s lab, Irvine signed on for a master’s degree, and followed it up with a PhD, under Elezzabi’s supervision.

Elezzabi describes Irvine as “one of the best students I’ve ever had.”

Irvine is equally respectful of Elezzabi, saying that he felt well prepared when he left the U of A to conduct post-graduate research with Hell. They also still work together on research.

“Whenever you start a new field or something new, there’s always a learning curve. But with my education at the U of A, especially under Abdul, I was very well prepared. I knew how to do research and literature surveys and formulate experiments, and how to align myself with people to work with. And I wasn’t afraid to ask the boss for help.”

Now working as a defence scientist at Defence Research and Development Canada, Irvine spent two years working with Hell on the project. The pair were co-authors on two research papers, including one major paper in Nature Photonics in 2009.

Breakthroughs like STED are not overnight achievements. Irvine knows that Hell had the idea for STED in the 1990s and worked on it tirelessly.

“He came up with a really good idea and ran with it for over 20 years. It’s year-over-year contributions and breakthroughs—I think that’s what gets a Nobel Prize, and making a real dent in a particular area of science,” he said.

“I remember when I looked at his lab back then, I saw how good they were and said, ‘I want to be part of that and bring something back to Alberta.’ That’s what I set out to do, and I went and made my contribution with a couple of papers. I think everyone comes into [research] with aspirations to make an impact on the world. I guess everyone starts out thinking they want to win the Nobel Prize—and at least I made it to a lab where they did.”

Learning from a Nobel laureate
Newsroom