Learning the secrets of how cancer works

Medical researcher pioneers technique to visualize how cancer cells invade surrounding tissue as it is happening. 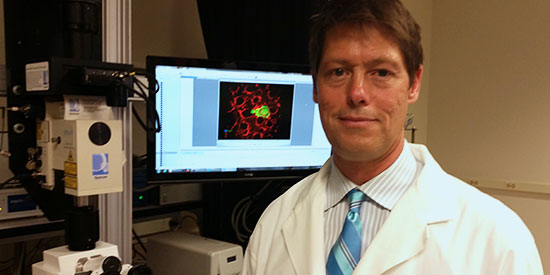 John Lewis and his research team have pioneered a technique to capture real-time video of cancerous tumour cells spreading through the bloodstream.

John Lewis points to a video on his computer screen. In it, hundreds of small cells can be seen winding their way through a blood vessel, seeking a foothold on the surrounding tissue. While small and innocuous now, the cells are deadly. They are cancer.

This movement of tumour cells is part of the process leading to metastasis, or the spread of cancer from one organ to another. According to Lewis, an associate professor in the University of Alberta’s Department of Oncology and the Sojonky Chair in Prostate Cancer Research, it is vital researchers learn more about it.

“We hear a lot about cancer and diagnosis, but really when we think about who succumbs to the disease, 90 per cent of patients who die of cancer have metastasis. So it is metastasis, really, that is the deadliest aspect of cancer.”

The video capture of the spread of tumour cells is an innovation pioneered by Lewis’s research team, giving them a window into how the cells move around the body in real time. That technology has now also provided, for the first time, an in-depth look at how the cells attack the tissue from the bloodstream to form a new tumour—a process called extravasation. The finding were published in the Aug. 28 edition of the journal Cell Reports.

Lewis says his team wasn’t expecting what they found. “Tumour cells would get stuck in these organs in the blood vessels and they would move around a little bit, and then they would stop and project these little fingers out of the tumour cell.”

Those fingers are called invadopodia, and according to Lewis, it’s the first time they have been seen in cancer in a live model. The video evidence shows they are necessary for extravasation, as the entire tumour cell eventually follows the invadopodium out of the bloodstream and into the tissue.

“It was one of those eureka moments that you don’t get very often,” says Lewis. “You cherish it as much as you can.”

The findings may hold important implications for future treatment of cancer. Lewis says his work shows the invadopodia can be inhibited pharmaceutically, stopping tumour cells from escaping the bloodstream and blocking the process of extravasation.

According to Lewis, though, the treatments may only have clinical use in very specific situations. Most often, by the time many cancers are diagnosed, metastasis has already occurred in the body and it’s too late to prevent extravasation. But the U of A professor says the treatments could be extremely useful if applied during surgical procedures.

“There is emerging evidence, and it’s scary evidence, that potentially these procedures can facilitate the spread of cancer cells,” explains Lewis. “After surgery some cells may be shed off the tumour and be circulated around the bloodstream, and evidence suggests that there is an increased chance that these patients may develop metastatic disease somewhere down the road. So there might be a role for these kinds of treatments during surgery or after a biopsy to prevent metastasis.”

Lewis says much more study is needed looking into the components of invadopodia, as well as work to develop targeted drugs that can inhibit it without causing broad side-effects for the patient.

He believes if there is a chance in the future to cure or block metastasis, fully understanding extravasation is a critical part—a part Lewis hopes his work plays a starring role in. “Hopefully in 20 years, looking back, we’ll appreciate how significant [this discovery] is.”

The study was supported by grants from the Canadian Cancer Society, the Natural Sciences and Engineering Research Council of Canada, the Canadian Breast Cancer Foundation and Movember Prostate Cancer Canada.

Learning the secrets of how cancer works
Newsroom