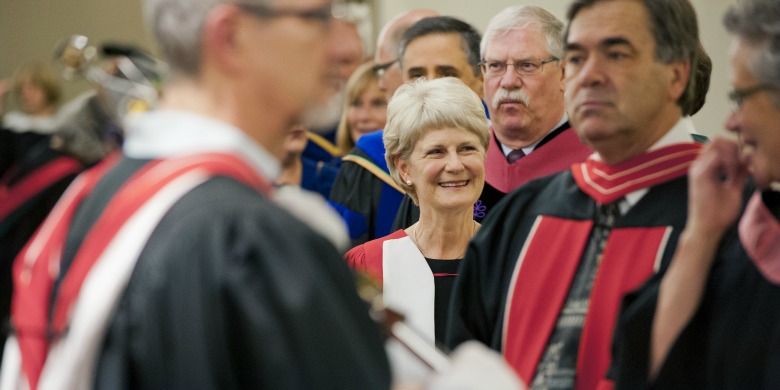 (Edmonton) The audience at the University of Alberta’s fall convocation ceremony Nov. 21 received a message about personal responsibility, perseverance and community from an honorary degree recipient.

Marguerite Trussler, a distinguished U of A alumna and former provincial judge, admitted that despite receiving two degrees from the university, she “for one reason or another” never got to attend her own convocation ceremonies.

Trussler’s life has been very busy since her U of A days. Many of the accomplishments that made her a natural candidate for the honorary doctor of laws degree come from her days as a Justice of the Court of Queen’s Bench of Alberta.

Trussler told the convocation audience that early on in her legal career, she embraced the philosophy of individual responsibility. She told the graduating class of 2012 that their future is in their hands.

“This university has equipped all of you to move forward in your lives. What happens in the future—what you do with this advantage you have received—is up to you.”

As a judge, Trussler is credited with many innovations within the court system to protect children in matters of family and criminal law.

Having seen first-hand how the vagaries of life can topple some people, Trussler urged this year’s U of A graduates to be prepared for the up and downs of the future.

“If you face adversity, never give up. If you are confronted with problems, sometimes they can be overcome. Sometimes you can decide not to confront them, but to go around them. And some of you will have to change direction altogether. But whatever you do, do not become a victim.”

Trussler acknowledged the roles families and loved ones play in a university student’s goal of earning a degree, and she told the graduates that with the privilege of education comes an obligation to help others.

“Give something back to your community. That’s what I mean by individual responsibility.”