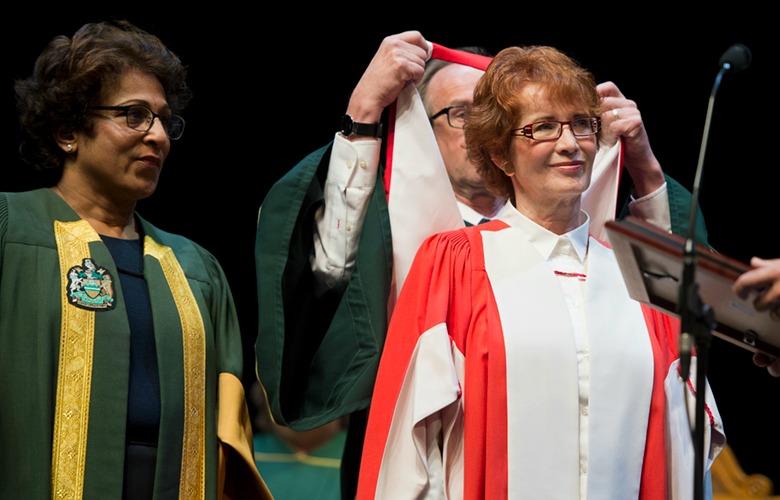 (Edmonton) The saying goes that good things come in threes; for Chief Justice Catherine Fraser, who crossed the convocation stage at the University of Alberta for a third time to receive an honorary doctor of laws degree, it came with an opportunity to share her wisdom and knowledge with law graduates during the faculty’s 100th anniversary.

In her address to graduands, Fraser noted that her career and the sum of her legal experiences are largely the result of sweeping societal changes designed to provide equality for all—change that would see her become perhaps the first female partner in Alberta, and the first female chief justice in Canada. Yet, she noted, for all the many things that have changed, more still have remained the same.

“For men and women graduates, the world remains a mystery,” she said. “Unlocking that world is complex.”

In imparting her advice, she urged students to respect and appreciate the time they have before them, to choose their paths carefully and to be willing to accept change as a fact of life. She encouraged the attendees to celebrate all their accomplishments and know themselves, including finding out what brings them joy. She advised them to take time for family friends and important relationships in their lives, noting that work is only part of life and should not be the focus of it.

“Find the work-life balance that makes you and your family happy,” she said.

She challenged them to be courageous and take risks. Disappointments and failures will happen, but it is what is learned and applied from them that makes the difference, she said. Fraser urged the class of 2013 to stick to their principles against unseen and unimaginable challenges and barriers, positing that although they may need to compromise things such as time and ideas, they should never go back on values. She urged them to seek the truth, using their careers to serve the greater good.

“I have always believed that if we are to retain public confidence, the application of the law to life should actually produce justice—and justice for all, not just some,” she said.

Fraser closed her address by quoting from and riffing on the words of Theodor Seuss Geisel, supporting the six keys that she offered the audience in rhyme.

“Fight the battles you need, we’re relying on you. We know that your courage will see you on through. Don’t get sidetracked by those who would lead you astray. Speak truth to power; show others the way.

“Make time count as you leave your beloved uni behind. Never forget: this is your time to shine.”