UAlberta researchers pull animal-based products out of the mix. 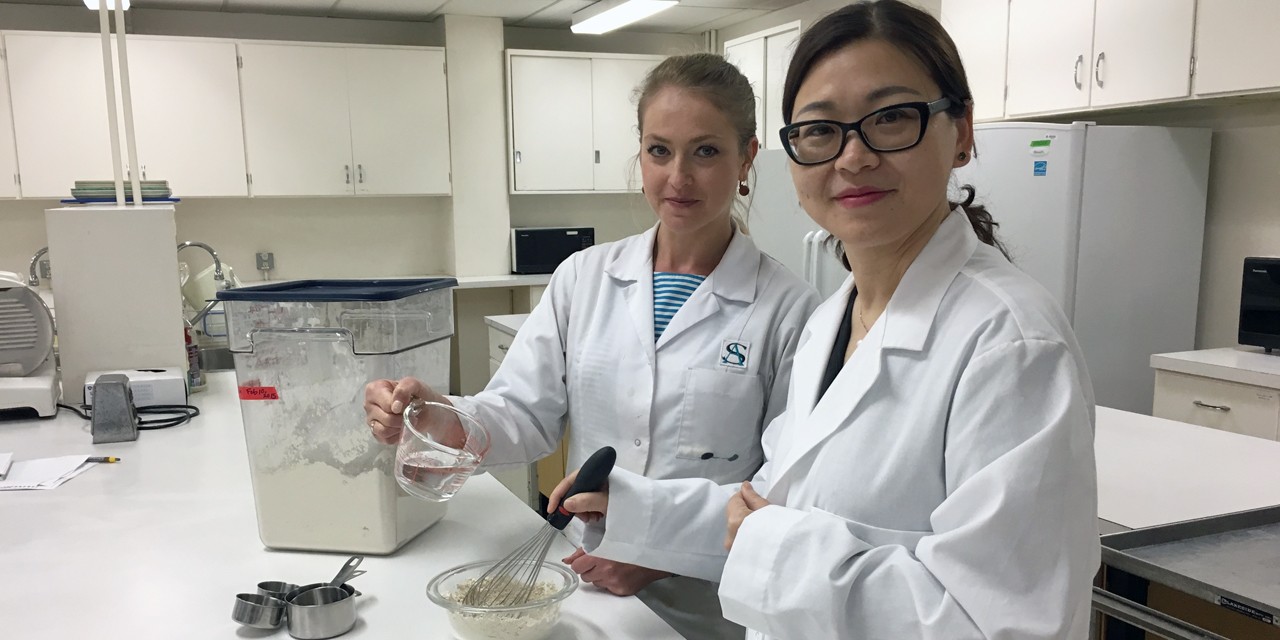 Vegans and vegetarians will soon have one more way to have their cake and eat it too.

Researchers in the University of Alberta kitchen have whipped up angel food cake and muffins as light and fluffy as bakers expect, using lentil protein powder instead of eggs and milk.

The trial goodies created at the U of A were a hit with taste-testers.

“They liked it, especially the muffins,” said food scientist Lingyun Chen, a professor and Canada Research Chair in the Faculty of Agricultural, Life and Environmental Sciences. In multiple tests that featured angel food cake and muffins containing either eggs and milk or varying amounts of lentil protein, tasters reported that there was little to no difference in taste and texture.

Chen and her team were ultimately able to bake muffins using nothing but lentil protein, and cut egg and milk content to half in angel food cake—the fussiest of cakes to bake from scratch. They chose it deliberately for its difficulty factor, to give the lentil product a tough test.

If it can make an angel food cake successfully...

“If this can make an angel food cake successful, it can make many other products too,” said Chen.

The study revealed that powdered lentil—resembling flour—produces the same foaming reaction and air bubbles in batter as eggs and milk, which is what gives good baking a soft, springy texture.

The discovery—resulting from Chen’s ongoing research program with plant-based proteins—means that the food-processing industry can now start experimenting with the ingredient in their own recipes. She plans to present the results at upcoming food science conferences.

She predicts home bakers will be able to reach for lentil protein on store shelves within two to three years, adding to the plant-based choices consumers already have, like chickpea flour, she noted.

Overall, shoppers and food producers alike are becoming more aware of the advantages pulses offer both for healthy eating and cost-efficiency, Chen said.

According to Pulse Canada, Canadian production of pulse and other special crops like peas, lentils, sunflowers and buckwheat jumped from about one million tonnes in the early 1990s to 5.9 million tonnes in 2015.

Lentils and other pulse plants like dried peas and dried beans appeal to health-conscious shoppers by providing high-protein foods low in fat and cholesterol. The crops also offer more stable pricing for processors than animal-based commodities like eggs, which tend to fluctuate in price, Chen said.

“Plant proteins are the most rapidly-growing food ingredient sector. I think you will see more and more food on the market with these as an ingredient,” Chen said.

The findings were recently published in the International Journal of Food Science and Technology.

U of A scientist lending expertise to NASA Mars 2020 rover mission
Tiny versions of ancient spear-throwing weapons were likely used to train children, U of A archeologists find
Up to 70 per cent of us feel like a fraud, says U of A psychologist
Agricultural ‘mini-internship’ gives U of A students hands-on career experience
Elder-friendly care after emergency surgery dramatically improves outcomes for older patients: study
New computing technique could help make Bitcoin mining faster and greener
Newsroom