Western grebes and humans can be lakeshore neighbours as long as people respect the birds' nesting grounds, UAlberta study shows. 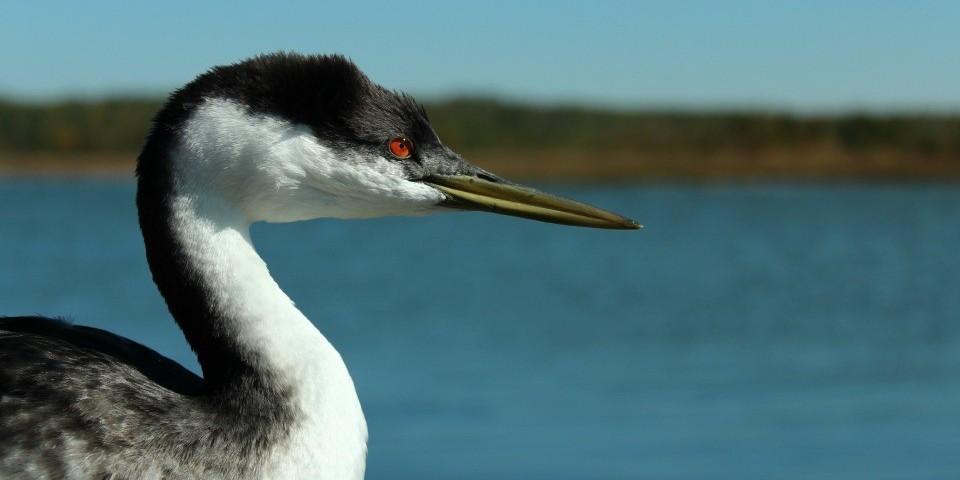 (Edmonton) A declining bird species recently listed by the Alberta government as threatened in status is managing to survive as it shares heavily developed lake habitat with humans—but care must be taken to preserve its breeding grounds, say University of Alberta researchers.

A study by U of A co-authors Mara Erickson and professor Mark Boyce indicates that the western grebe is able to persist on lakes with shoreline development, while at the same time showing a definite link with the preservation of bulrushes as cover for nests and quiet nesting waters.

The researchers, whose findings were published recently in the journal PLOS ONE, also note that the grebes are less likely to persist on boreal forest lakes, which are on the northern boundaries of their range. The reasons are unknown, but Alberta is also seeing a rapid decline in two other water bird species from the same region. Various research is underway to explore the complexities associated with climate change and its effect on the birds, noted Boyce, based in the U of A’s Faculty of Science.

The researchers analyzed populations of the western grebe on 43 Alberta lakes known to support the bird over the past 40 years, and found that they still persist on 63 per cent of those lakes.

The red-eyed water bird, known for its pattering courtship dance across the waves, is found only in North America and is designated as a threatened species under Alberta’s Wildlife Act. Since 1970, it has disappeared from almost half of the Alberta lakes it used to inhabit, and also from traditional nesting sites in California and British Columbia.

Lakes that are a summer haven for vacationers are also the same habitat chosen by the bird, which prefers deep, large, fish-filled waters.

As a result, limiting recreational development is necessary to help conserve the bird’s dwindling numbers, said Erickson, who conducted the study for her master’s thesis.

“There is the risk of losing brood-rearing habitats if steps aren’t taken to prevent disturbances caused by clearing of crucial shoreline vegetation like bulrushes,” she noted. Including wave-free buffer zones in conservation management strategies is also a way to minimize disturbance to reed beds needed by the birds to nest and raise their young, she said.

“The birds will do fine on developed lakes so long as people respect the critical habitat,” noted Boyce.

“Cottage owners and developers should take care to minimize disturbance near western grebe colonies, especially in June, to avoid disturbing nesting birds,” he added. Such intrusions may cause the adults to flee their nests, leaving eggs vulnerable to predators like gulls and ravens.

The study’s findings demonstrate the importance of identifying factors related to the persistence of a species—its ability to constantly survive at a site over time—as an important step in effective conservation management, Erickson noted.

The study was supported by the Natural Sciences and Engineering Research Council of Canada, the Alberta Conservation Association, the North American Waterfowl Management Plan and the Alberta Sport, Recreation, Parks and Wildlife Foundation.