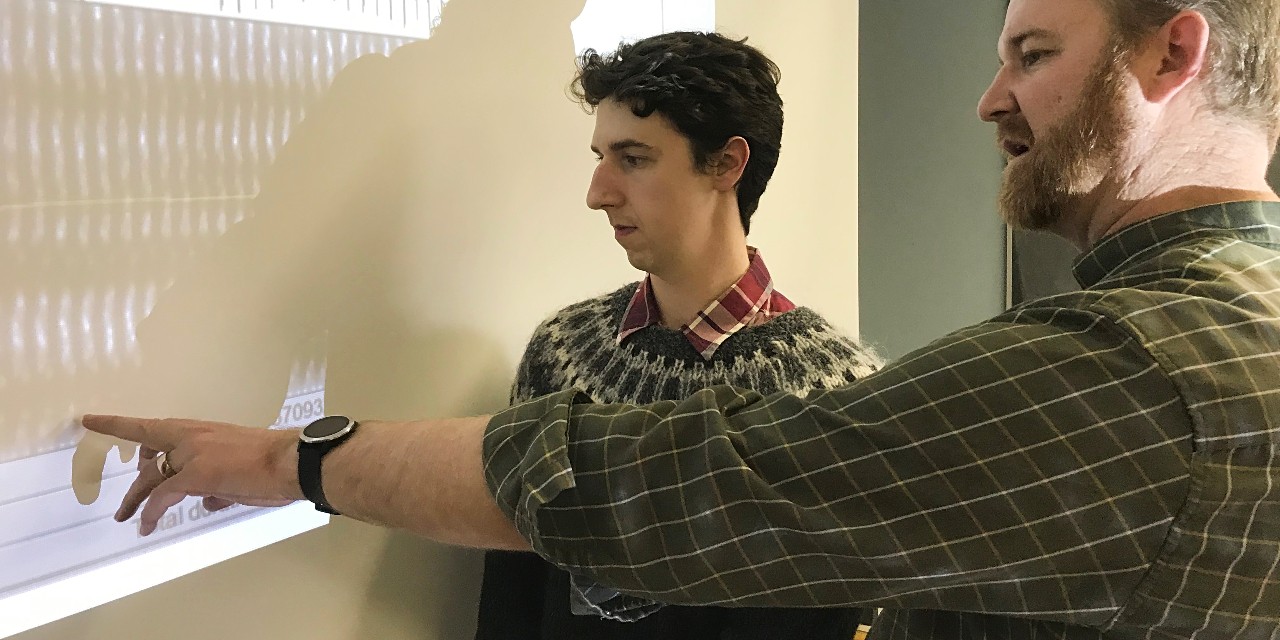 U of A undergraduate student Bryce Wittrock (left) and linguist Ben Tucker analyze a waveform from a recording for their study comparing dialects among people in southern Alberta, southern Saskatchewan and Edmonton. (Photo: Geoff McMaster)

It’s only a 40-minute drive from Queens to the Bronx in New York, but the difference in dialect is obvious to most familiar with the English language.

In Canada you probably have to cross the continent to hear such dramatic shifts in pronunciation. And in Western Canada, we all sound the same, don’t we?

Not exactly, said University of Alberta undergraduate student Bryce Wittrock, who just published a study on Canadian Prairie dialects along with his supervisor, U of A linguist Ben Tucker.

Drive to Southern Alberta and Saskatchewan from Calgary or Edmonton, and if you listen closely enough, you’ll hear slight differences in vowel pronunciation, said Wittrock.

“The dialects of southern Alberta and Saskatchewan English (SASE) and Edmonton English display measurable differences” in the pronunciation of certain vowels, he concluded in his study, published last month in the linguistics journal Canadian Acoustics.

One of the most striking examples of vowel shift is the word “fired,” which in SASE country can sound similar to the way it’s pronounced on the East Coast. However, Bryce pointed out this is an extreme example, and not everyone in the region necessarily pronounces it that way.

An English speaker from Edmonton pronounces the word "fired."

The word “head” sounds more like “hid” in the south, but that difference is only clear when pronunciations of the two regions are played back to back.

Wittrock recorded 24 interviews—13 with people from communities in southern Alberta, nine from southern Saskatchewan and two who had grown up in the south of both provinces—for a project that received funding from a Faculty of Arts Roger S. Smith Undergraduate Researcher Award two years ago.

Averaging about 25 minutes, the interviews were designed to be “free, light and conversational, often branching from summer holiday plans or leisure activities in an attempt to elicit maximally naturalistic vernacular,” said Wittrock.

Interview subjects were encouraged to relax and think about what they were saying, not how they were saying it, he said, “because when people are self-conscious about how they're talking, they change it in ways that aren't necessarily authentic.”

Comparing those recordings with samples from Edmonton residents already in Tucker’s archive, Wittrock examined the “resonant frequencies” of the vocal tract, which produce qualities such as colour and tone, to determine variation in dialects, said Tucker.

Those frequencies explain how we all identify subtle nuances of speech, said Tucker. “We can look at those resonant frequencies” to see how they shift between regions or populations.

A big challenge in defining a dialect is separating out differences between individuals or between, say, men and women. There are also variations according to social factors such as level of education, occupation and age.

“We're trying not to make assumptions and say a difference is necessarily dialectal, or related to differences between whole populations or regions,” said Wittrock. “Maybe it’s just that this is one social group of people and that is another.”

Differences in Canadian dialect are largely determined by divides between rural and urban populations, he said, rather than between regions. Someone from Edmonton can sound more like someone from Calgary than like a person raised on a nearby farm.

Most vowel shifts are subtle in the Canadian West, but in certain rare cases, such as the English spoken by southern Alberta Mormons, the dialect has sharply distinct features.

Since the study of Canadian English in the West is largely unexplored territory—compared with research done in the East—Wittrock said there is plenty of work to carry him into graduate school and beyond.

One project he has in mind is an examination of English spoken by workers on Alberta’s oil rigs, which may have unique inflections given that, traditionally, many of them have been workers from Newfoundland.

“He might just find a kind of hybrid there,” said Tucker. “But he could spend the rest of his life just working with the data he's recorded so far.”