Listening in on climate change

If it makes a sound, we can count it. This is giving us a whole new insight to animal behaviour. 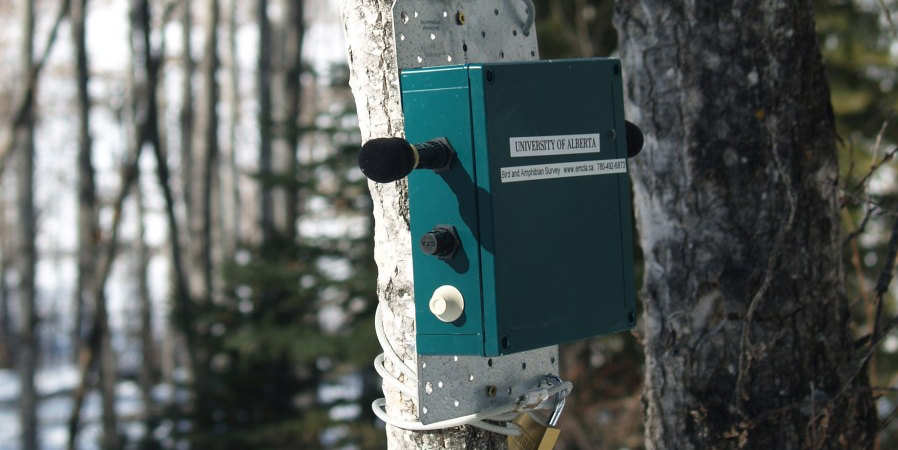 An audio-recording unit set up on an aspen tree. (Photo courtesy Julia Shonfield)

A University of Alberta researcher is using bioacoustics technology to record the soundscapes of Alberta wildlife—and track the effects that climate change is having on animal populations.

“Technology has changed the way we survey for wildlife,” says Erin Bayne, associate professor in the Department of Biological Sciences at the U of A. “If it makes a sound, we can count it. This is giving us a whole new insight to animal behaviour.”

Bayne—along with his team of graduate students—is working with the Alberta Biodiversity Monitoring Institute (ABMI) on the new initiative. “In the past, people would basically go out in the woods, look for animals, stand there, listen for them, count them and then walk away. You would get only one snapshot,” says Bayne.

The bioacoustic unit uses new technology to continuously record soundscapes up to months at a time. The group is working to have computers automatically identify species sounds, and they are also creating a central repository so citizen scientists can assist with data entry.

“These machines are out there all the time. We are getting data on species that nobody has ever really monitored before, because some of them call at 10 o’clock at night or two in the morning,” says Bayne—times when the average bird watcher isn’t necessarily out monitoring. “We’ve found things that we never would have found by just having people do it.”

Their efforts are helping track the effects of climate change on long-term species sustainability. “One of the predictions is that migrating animals won’t be able to keep up with the changes. We’ve never really known the exact timing when these animals arrive back for the season.”

Bayne notes that the new technology will allow a series of these machines from Edmonton all the way to the Northwest Territories to track the exact arrival of the returning migratory species. “We will know exactly when the birds arrive at any given point along that trajectory, and we can start to track the changes in their arrival times year to year.”

Bayne and his collaborators are also engaging technology to determine exact locations of the animals. “Sound travels at a fixed rate. If you put out three of these monitoring units and know the exact time when the sound was recorded, you can triangulate back and say, ‘The bird was right there.’”

He notes that this is useful as a tool for assessing the effectiveness of land reclamation efforts by the energy and forestry sectors. “We can now tell you whether birds are using trees planted along seismic lines, for example.” Industry is using the technology to monitor for their environmental impact assessments. Along with ABMI, Bayne is pushing this new technology to become the standard monitoring protocol for the province.

Learn more about the Bioacoustic Unit.

Listening in on climate change