First study of its kind shows formula-fed babies’ gut microbiomes more like those of breastfed babies when they live near natural environments. 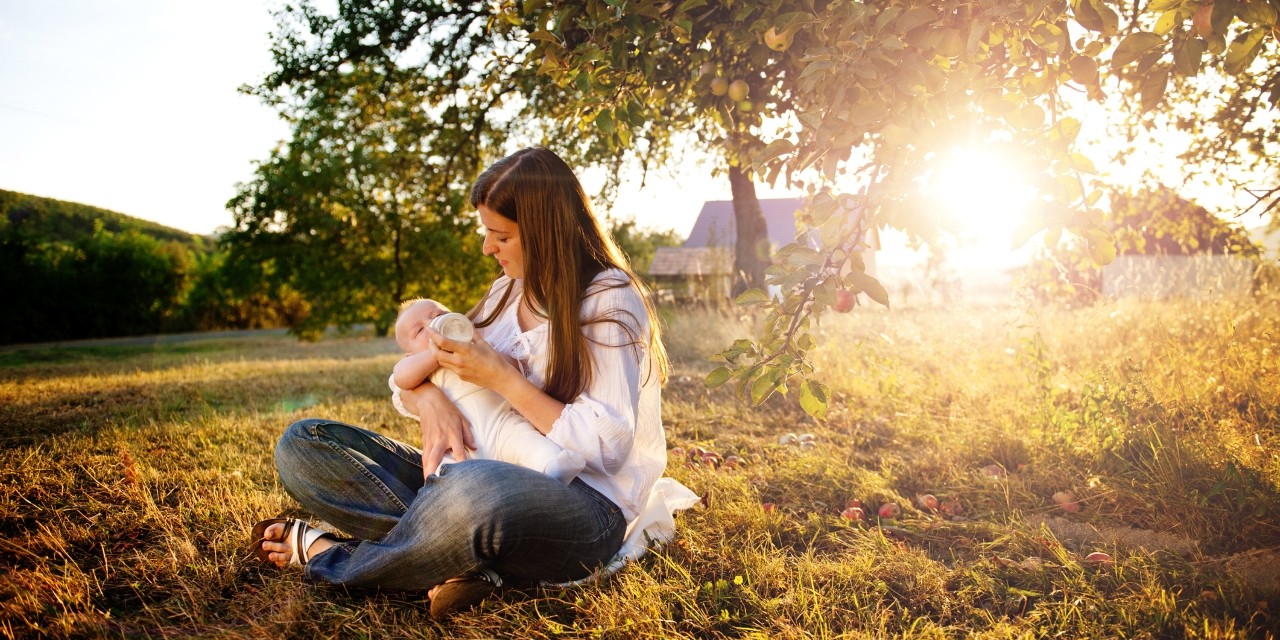 Formula-fed babies who live near natural green spaces are more likely to have gut bacteria similar to that in breastfed babies, according to a new study. (Photo: Getty Images)

Living close to natural green space can mitigate some of the changes in infant gut bacteria associated with formula feeding, according to new research published in the journal Environment International.

“Not every infant can be breastfed,” said Anita Kozyrskyj, pediatrics professor at the University of Alberta. “This is one of the first pieces of evidence for a nature-related intervention that could possibly help promote healthy gut microbial composition in infants who are not breastfed.”

“We consider breastfeeding to be the desirable state, and we know that a breastfed infant is at reduced likelihood of many conditions later in life—for example, developing respiratory infections and becoming overweight,” said Kozyrskyj, who is principal investigator for SyMBIOTA, a research team that studies how changes in infant gut microbiota can lead to the development of obesity, allergies and asthma in children.

The researchers examined fecal samples taken during routine home visits from 355 four-month-old infants who are part of the CHILD Cohort Study—a national study that is following nearly 3,500 Canadian children from before birth to adolescence with the goal of discovering root causes of allergies, asthma and chronic disease.

The babies’ postal codes were then cross-referenced with the City of Edmonton’s urban Primary Land and Vegetation Inventory (uPLVI), which maps natural green spaces in the city, including natural forest, grasslands, wetlands, lakes, rivers and ravines.

“We found that the infants who lived within 500 metres of a natural environment were less likely to have higher diversity in their gut bacteria,” she said. “It may seem counterintuitive, but a young breastfed infant has lower gut microbial diversity than a formula-fed infant because formula feeding increases the number of different gut bacteria.”

The results applied only to infants living close to natural spaces, regardless of whether there was a man-made park in the neighbourhood.

Walking the dog benefits baby too

The researchers found the greatest association was for formula-fed infants living in a home with a pet. Though the exact mechanism is not understood, they hypothesize that families who walk their dog may use natural areas more often, or perhaps pets bring healthy bacteria into the home on their fur.

“We know that when you introduce a pet into the home, it does change the types of microbes that are found in household dust,” Kozyrskyj pointed out.

The researchers found that 54 per cent of the infants lived close to a natural environment and 18 per cent of the babies were exclusively formula-fed. Nine per cent were both formula-fed and had pets in the home. The results were adjusted for the type of delivery (caesarean section or natural), the season, and the age and education level of the mothers.

They did not distinguish between the type of pets the families owned, but Kozyrskyj said, “We think it’s a dog effect.”

“Even if you live in a highrise, if you have a dog you go out and use the natural spaces near your home. It’s likely that the pet is the conduit.”

The researchers reported an increased presence of Proteobacteria—the type of bacteria more often found in nature—in the guts of all of the babies.

“We had this wonderful opportunity for data linkage between the unique natural assets map, the home locations of infants in the CHILD birth cohort and information on the composition of their gut bacteria,” Kozyrskyj said.

“It takes an interdisciplinary team to do this kind of research,” she said. “That’s what made the project so rich in terms of the interpretation of the results and the kinds of questions that could be asked.”

Kozyrskyj said the next step for this research will be to follow the formula-fed infants who are exposed to natural areas throughout childhood and track the impact on their health.

She said she often receives emails from new mothers who are unable to breastfeed and are concerned about their children’s futures. Based on these results, she will now advise them to take their babies out to natural areas and consider getting a pet.

“Edmonton’s river valley is accessible to all,” she said. “It's just a matter of encouraging its use.”

The research was funded by the Canadian Institutes of Health Research, the Allergy, Genes and Environment (AllerGen) Network, the Stollery Children's Hospital Foundation through the Women and Children's Health Research Institute, and the Spanish Ministry of Science and Innovation.