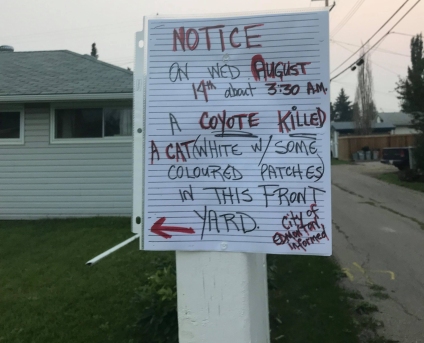 Cats killed by coyotes are often found on front lawns and porches, likely because they run to those areas seeking cover, according to U of A expert Colleen Cassady St. Clair. (Photo: Supplied)

U of A research provides basic signs that help officials determine a cat’s cause of death more easily. 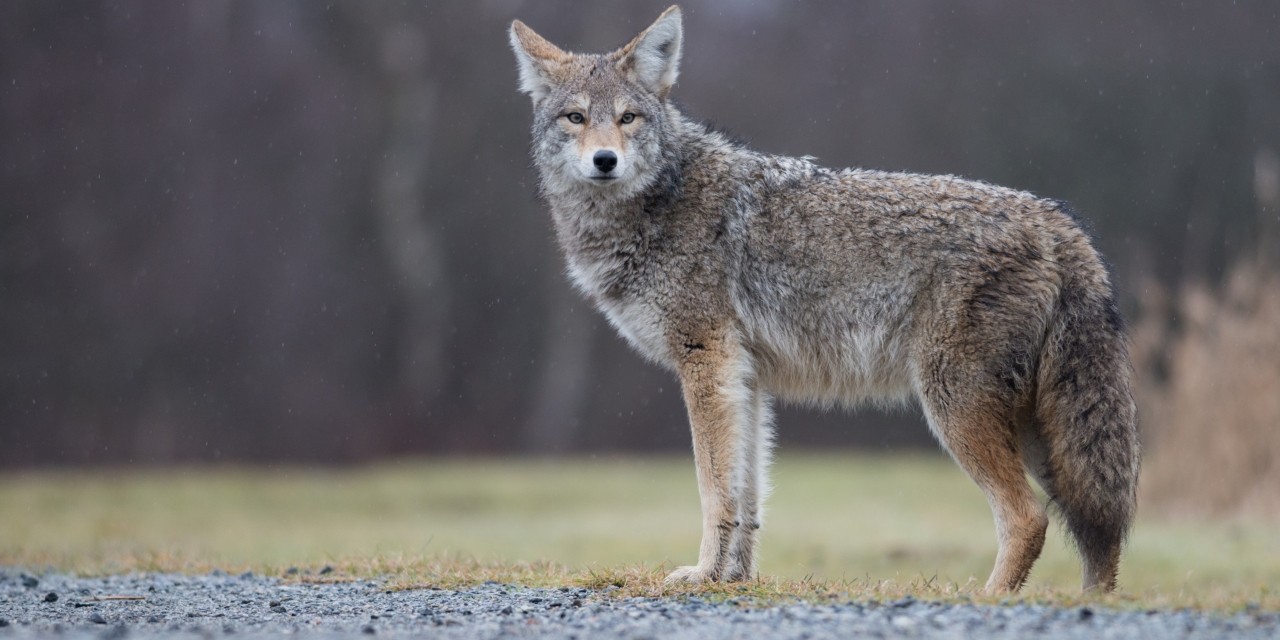 Urban coyotes were responsible for a spike in cat killings in the Edmonton area, according to U of A researchers who found some of the wily predators may even be specializing in hunting domestic cats. (Photo: Getty Images)

After a spike of reported cat killings in the Edmonton and St. Albert areas in 2007, veterinary pathologist and U of A adjunct professor Nick Nation examined several of the dismembered bodies.

“Parts of cats were often found by the public on playgrounds, in front yards, beside walkways and trails, and these were quite disturbing. Press coverage was also heavy, and people were more likely to call the police when they saw a carcass. The first thing that comes to mind is that there’s a psychopath killing and dismembering cats.”

Nation determined that all of the cats had been killed by coyotes, which meant police resources weren’t needed to pursue a killer. But it showed a need to learn more about the condition of the cats’ bodies, which was causing confusion for investigators.

“We wanted to find out what’s going on here, and a way to screen for animal abuse,” he explained.

To that end, Nation and U of A biologist Colleen Cassady St. Clair teamed up to review 10 years’ worth of case files between 2007 and 2017.

After studying necropsy results of 53 cats, they concluded all had either been direct victims of coyotes or had died of injuries from being hit by vehicles, then scavenged by coyotes.

“We didn’t feel any of them had been traumatized by humans,” he said.

But the coyote kills left the bodies in a mutilated state that often leads people to assume the animals—some of the pets were wearing collars or other ID—were victims of foul play.

In fact, St. Clair, an expert in urban coyote behaviour, said the state of the bodies reflects how coyotes might value cats as prey. Tufts of hair and shredded skin in bite wounds also give clear evidence of coyote kills.

“The wounds are nothing remotely like knife cuts,” she added.

The location of the bodies near homes and other populated areas potentially reveals more behavioural information, St. Clair said.

“One reason domestic cats wind up on lawns and porches is because that’s where they’re running for refuge. But another possibility is that coyotes perceive dark porches and lawns as secure places to eat their prey.”

Some city coyotes also appear to be learning how to specialize in hunting cats, she noted. The study showed the cat killings typically happened between June and October, with 80 per cent occurring in August and September. The timing corresponds with the high availability of young birds and rodents the cats would be hunting, which in turn makes them vulnerable to coyotes.

“The seasonal clumping of cases, and in specific locations like St. Albert, suggests the work of a few individuals or family unit of coyotes,” perhaps parents teaching their pups how to hunt, St. Clair said. It’s also possible they learn to hunt feral cats and then switch to pet cats, which are less wily and easier to catch.

“It would seem like a natural step, as when bigger carnivores like cougars are hunting deer and if conditions are tough, they might switch over to livestock,” she explained.

St. Clair and Nation—who continues to examine one or two new cases annually—said it’s possible scores of felines are killed in the Edmonton area each year by coyotes.

“It could easily be dozens, even hundreds, and we think the number of coyotes is between 500 and 1,000, so the encounter rate with cats is probably high,” said St. Clair, adding that few bodies are ever discovered by humans.

Nation said the study provides some basic signs that may aid police, animal control officers, veterinarians and veterinary pathologists in more easily determining a cat’s cause of death.

The issue is always a concern, he added.

“Psychopaths do this type of thing early in life, which is why police pay attention. This helps them to determine very quickly if they’re going to follow the case up.”

Inside or outside cat?

St. Clair, who has a cat herself, believes the research also provides some pause for pet guardians who believe it’s cruel to restrain cats that want to roam outdoors.

“A cat that meets a coyote does not have a pleasant end of life,” she said. “Teaching cats to live indoors or to be outdoors on leashes or in catios would be a huge boon for urban birds and rodents, but it would also be kinder for the cats themselves.”

The study, A Forensic Pathology Investigation of Dismembered Domestic Cats: Coyotes or Cults?, was published in Veterinary Pathology.