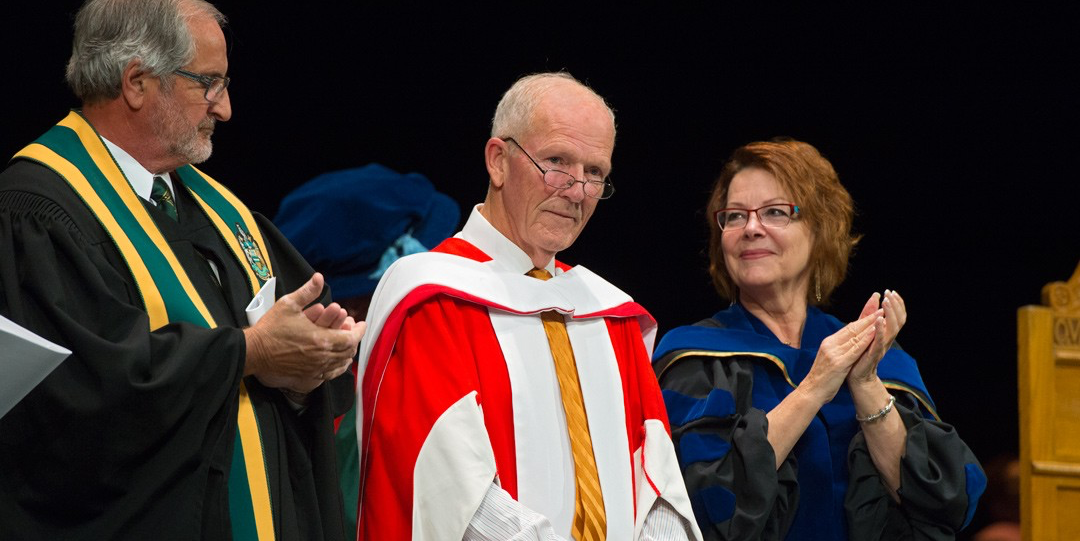 Dennis Erker receives a warm reception from the convocation audience after receiving his honorary doctor of laws degree from the University of Alberta Nov. 19. (Photo: Richard Siemens)

(Edmonton) Of all Dennis Erker’s talents and skills, the one that has probably served him best is the ability to surround himself with good people who were good at life and who were willing to share the secrets of their success.

As far as Erker was concerned, no one was better at life and had more lessons to teach than his good friend, the late Gary McPherson, former executive director of the University of Alberta’s Canadian Centre for Social Entrepreneurship in the Alberta School of Business and guiding light with the university-based Steadward Centre. McPherson, who died in 2010 at the age of 63, lived more than 30 years on an “iron lung” and his entire life in a wheelchair after contracting polio when he was nine.

“The person who probably taught me the most about putting perceived problems into perspective was someone who, by all accounts, should not have achieved anything other than staying alive,” said Erker, explaining to a packed Northern Alberta Jubilee Auditorium of fall graduands and their loved ones how McPherson—with whom Erker worked to bring the 1994 World Wheelchair Basketball Championships to Edmonton—taught himself a technique for breathing without a respirator that finally allowed him to leave the hospital for good when he was 43.

“What Gary lacked in physical ability, he compensated for with his intelligence and determination. He created and ran businesses and sports teams from his bed in the hospital. When visiting him, if one dared to complain about life being rough, he would say, ‘Why don’t you tell me about your problems?’ That quickly put things into perspective.”

That was one of the many messages that Erker, an insurance industry leader and local community builder, imparted in receiving an honorary doctor of laws degree from the U of A Nov. 19.

Erker, who worked hard for his successes—first in the insurance industry and then as a city builder—admitted he might not be the person he is today were it not for people who came into his life “who challenged me to stretch and venture outside of my comfort zone.”

Early business successes meant a detour away from his studies in the Faculty of Education, but Erker says he never considered his education to be a waste.

“My years as a student at the University of Alberta helped me to expand my thought possibilities and to see opportunities presented. No education is a waste. The real waste is if we do not continue to educate ourselves,” he said. “I believe that the end of growth is the beginning of decay.”

“My years as a student at the University of Alberta helped me to expand my thought possibilities and to see opportunities presented. No education is a waste. The real waste is if we do not continue to educate ourselves.” —Dennis Erker

Erker also talked about the importance of giving back to the community that has given his family so much. Over the years, Erker has helped raised awareness and funds for a number of capital region projects, most notably the Mazankowski Alberta Heart Institute and the Stollery Children’s Hospital, the 2001 World Championship in Athletics and the Citadel Theatre, to name a few.

Erker added he is especially proud of his designation as an honorary colonel with the Loyal Edmonton Regiment, an honour bestowed upon him for his instrumental role in establishing Valour Place, a residence for members of the military and RCMP and their families receiving medical treatment in Edmonton.

“[People who serve in the military] are all heroes for their willingness to put themselves in harm’s way to make our country and our world a better place—one in which people like you and I can have the opportunity to speak freely and to be educated.”