London calling on U of A Olympians 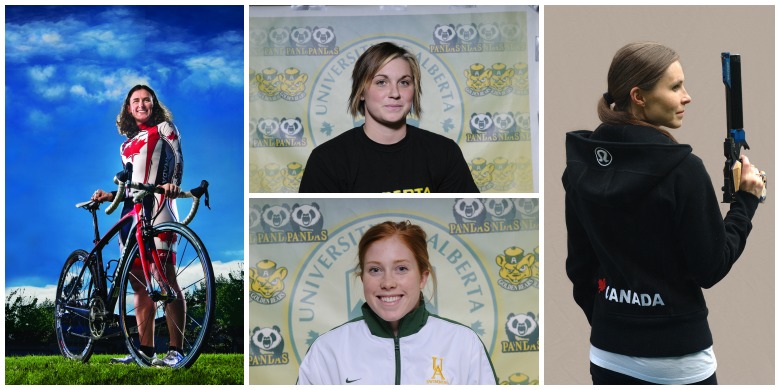 Four female athletes with ties to the University of Alberta have shot, cycled, wrestled and quite simply endured their way into the upcoming Olympic Games in London.

Triathlete Paula Findlay, cyclist Tara Whitten, shooting standout Dorothy Ludwig, and U.S. wrestler Ali Bernard, all either one-time or current students at the U of A, are making their final preparations for the sporting spectacle that begins July 27.

The 2007 Canada West Athlete of the Year spent more than two years as a Panda for the U of A while participating in cross-country, swimming and track before deciding to put school on hold in 2010 to focus on her training.

“Leaving school allowed me to move out to Victoria and look after myself,” she stated in a previous story for the U of A student newspaper, The Gateway. “When you are in school there’s not really time for physiotherapy, massage, and all the things that you need to do to stay injury-free. After I moved, I immediately felt better. I could put all my focus into one thing and that really helped.”

Despite temporarily leaving the University of Alberta to pursue a personal goal, Findlay said that her athletic training during her tenure as a student-athlete in Edmonton provided the knowledge and fortitude needed to meet the challenges she faces on a triathlon course.

Tara Whitten, a former cross-country runner with the Pandas and a National Team cross-country skier, turned to cycling in 2005 and suddenly slipped into a higher gear.

Whitten, who also stepped away from her studies in 2010 to pursue her Olympic dream, is a two-time world champion (2010, 2011) in track cycling, and winner of a gold medal and three bronze medals at the 2010 Commonwealth Games in India.

Before turning her full attention to cycling, Whitten was in the third year of a PhD in neuroscience. Having an interest in the brain that dates as far back as she can remember, Whitten entered Clayton Dickson’s Brain Rhythms Lab as an undergraduate in 2006 shortly after returning from a four-year hiatus living in Canmore, where she trained with the national cross-country ski team.

Whitten parlayed her lab experience into an NSERC undergraduate student award that allowed her to work on a project exploring the influences of body temperature on spontaneous brain rhythms. Before taking her latest break from school, Whitten was doing graduate research aimed at understanding the co-ordination of gamma oscillations in the hippocampus during different states of brain activity.

In a 2011 interview for New Trail magazine conducted by friend and Olympic teammate Findlay, Whitten said balancing school and sport has enabled her to be more efficient and allowed her to think differently about her sport.

“Being a scientist influences the way I think about training,” she said. “I’m very analytical about my training. I always want to understand why I’m doing something, and I think that’s really helped me to define my training and to be very methodical about how I approach it.”

Ali Bernard, currently an assistant coach with the Pandas wrestling team, is headed to London as part of the U.S. Olympic wrestling team.

Bernard, a five-time Canadian Interuniversity Sport wrestling gold medallist, came to the U of A in 2009 to finish off her final year of her degree through the Faculty of Physical Education and Recreation.

After her time as a competitor, Bernard chose to remain with the Pandas wrestling team to complete her schooling and serve as an assistant coach. She helped lead the U of A’s women’s wrestling program to its first-ever CIS team title in 2010-11 and first-ever Canada West team title this year.

The 26-year-old Bernard placed fifth at the 2008 Olympic Games in Beijing, China, and placed third in the 2011 World Championships. She is a two-time junior world champion (2003, 2005) and won a 2012 University World Championships gold medal.

Finally, with five national women’s 10-metre air pistol championships in her holster, Dorothy Ludwig (nee Hare), who graduated in 2000 with a bachelor of arts in drama from Augustana, says shooting has always been a family affair.

Her father, Bill Hare, competed in pistol at the 1964, 1968 and 1972 Olympic Games, and was pastor of Grace United Church until he passed away in 2005. Ludwig, who has been shooting competitively for 19 years, won her way onto the Olympic team earlier this year by winning the Canadian Olympic Trials in March by a single shot over her sister, Lynda Kiejko.

Now residing in Langley, B.C., Ludwig, a 33-year-old mother of one, is getting ready for her first Olympic Games.

London calling on U of A Olympians
Newsroom