U of A president hosts public forum, provides context for and details of financial decisions. 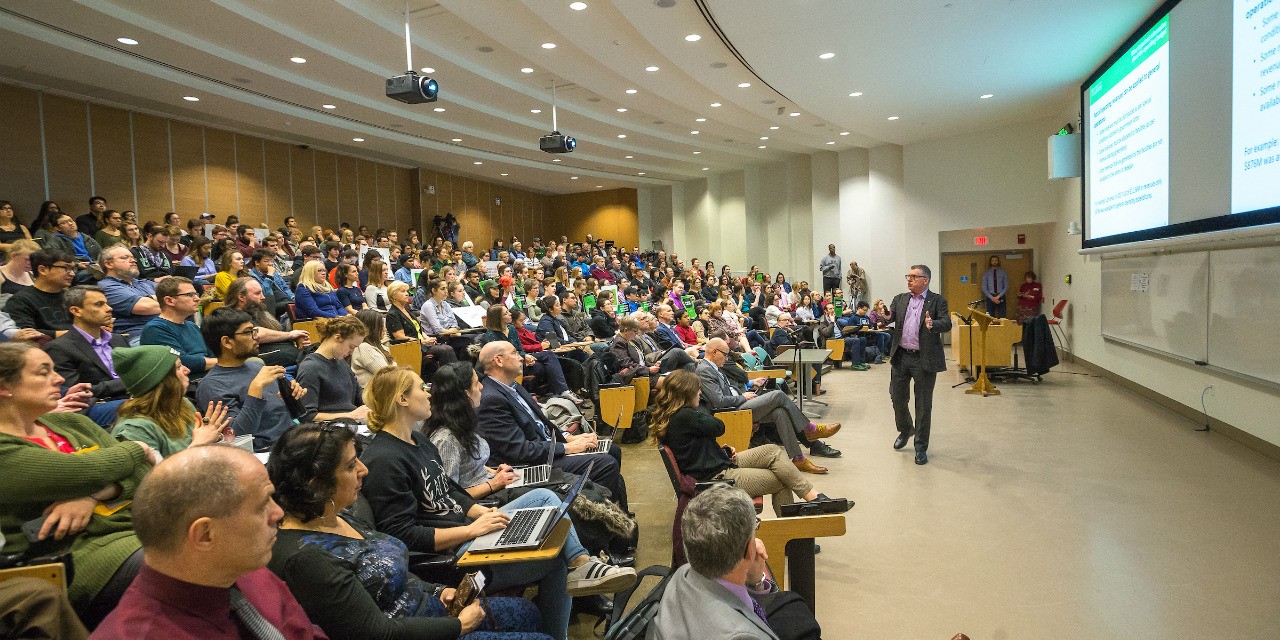 The University of Alberta simply can’t keep spending more money than it has, said president David Turpin during a public forum with the university community yesterday.

The forum came on the heels of the university’s board of governors approving a budget earlier this month which included a four per cent overall reduction in expenditures and fee increases for international student tuition, residence rates and residence meal plan rates.

The measures were taken, Turpin said, in an effort to address the university’s $14-million structural deficit and rising cost pressures while reducing its reliance on short-term investment income.

He said the decisions were extremely difficult to make, and the competing needs within the institution made the situation even more challenging.

“We have part of the institution that really doesn’t want to see increases in student fees, we have another side of the institution that says ‘we want increases in revenues because when we talk about savings and efficiencies, we’re talking about salaries.’” he explained. “This is the challenge the board had to grapple with. How do you balance these competing needs? It’s incredibly difficult because there’s no easy answer. Going the way we’ve been going isn’t a solution either.”

Many in the audience of more than 250 students and staff voiced their displeasure at the measures, often interrupting and even sometimes shouting down Turpin as he tried to answer questions.

The president started the forum by providing the context in which the financial decisions were made, including an explanation of the structural deficit, what the sources of revenues are and how they are allocated.

The university’s operating budget is $1.1 billion. There are restrictions on how about $350 million can be used, leaving $750 million in which to look for savings.

He also explained that, as with all budgets, the board made some assumptions when they approved the 2018-19 budget, specifically that the provincial government would not provide an increase in funding and that it would not provide any backfill to help with the tuition freeze for domestic students.

In light of the provincial government’s decision last week to provide a two per cent increase in the Campus Alberta grant, along with $17 million to be shared between the province’s 26 post-secondary institutions to help with the tuition freeze, Turpin was asked by several in the audience whether the board would reconsider the measures.

He said that when the university receives its budget letter from the provincial government, which will provide the details of its funding to the university—last year the letter was received in July—the board will look at a whole series of possibilities.

Elizabeth Johannson, president of the Non-Academic Staff Association, asked whether the university would consider putting a hold on layoffs that are occurring as a result of the four per cent expenditure cut while it assesses the impact of the additional revenue.

“We can’t freeze anything right now,” said Turpin. He explained that while the provincial government will increase its operating grant to the post-secondary system by two per cent and provide funding to backfill the tuition freeze, the exact amount of funding the university will receive remains to be seen.

“One of the principles is we don’t cross-subsidize and we don’t displace domestic students,” Turpin had said after the board of governors approved the U of A budget. “We don’t use the domestic grant to subsidize international students.”

U of A international students pay among the lowest tuition in the country, far below the average of Canada’s top 15 universities, he added.

Turpin also explained that neither the residences nor the meal plans receive any funding from the provincial government. Both services need to be self-financing and have been running deficits for years.

“If we don’t deal with that, we are simply saying to future generations, you have to deal with it,” he said.

Turpin closed the forum by emphasizing the value of the university as one of the most powerful engines of social, economic and cultural change in the province.

“We build a better community, we build a better province, a better Canada and a better world. That is what we do. And we will sustain ourselves into the future so that future generations can do the same.”