Looking back on a department ahead of its time 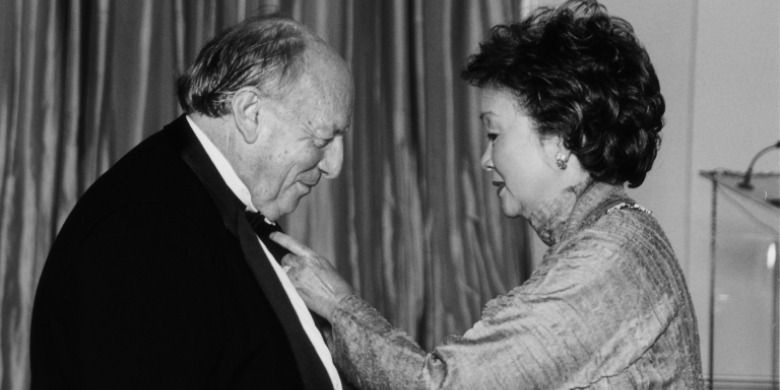 121005-brianevansoc-banner
Professor emeritus Brian Evans (pictured above during his appointment to the Order of Canada by former governor general Adrienne Clarkson in 2000) was instrumental in establishing the U of A's Department of East Asian Studies.

(Edmonton) One of the brains behind the University of Alberta’s Department of East Asian Studies says with a bit of serendipity and support from the late former premier Peter Lougheed’s government, the university established the program that continues to contribute in politics and culture three decades later.

“The Lougheed government provided the initial extra funding which was needed to get the department going, enlarging the university budget,” said U of A professor emeritus Brian L. Evans. “And then they had a very generous program to provide for scholarly and cultural exchanges. All of these things were done to make people more aware. And through that money we were able to send students abroad. These were opportunities that other institutions in Canada could count on a regular basis at that time, from a provincial government.”

In recognition of the program’s 30th anniversary this year, the department, the U of A Press and the China Institute recently launched Evans’ book, Pursuing China: Memoir of a Beaver Liaison Officer.

“By the time the program had been proposed, we had a very good academic vice-president, Myer Horowitz, who became president,” Evans recalled.

“He was very internationally minded and wanted to internationalize the institution—that was an opportunity that came as a result of our efforts and the good atmosphere that had been developed in Edmonton and Ottawa.”

That atmosphere was a change in Canadian foreign policy toward China, which Evans says started with former Canadian prime minister Pierre Trudeau. “When Trudeau became prime minister in 1968, he made it a cornerstone of his foreign policy that Canada should be looking west across the Pacific to Asia,” he says. “Canada at that time did not recognize the People’s Republic of China, but clung to this fiction that Taiwan represented China. And Trudeau said, ‘No, this is nonsense, we’ve got to recognize the PRC.’ And this was popular right here in Western Canada because in the early ‘60s, Canada had a major wheat market in China.”

With an economic downturn in Alberta, Evans says, Lougheed turned attention to Asia when he became premier in 1971. “Alberta was hit very hard by that, so they were looking for another means of exporting Alberta products. Lougheed looked at Japan and Korea and China, and he opened up in those areas. This was an opportunity for Alberta’s expertise in agriculture, petroleum and forestry to be developed. If it were not for that time, we wouldn’t have had the department when we had it.”

Along with that opportunity, the program was a result of a realization by Evans and colleagues such as professor Hazel Jones that establishing such a program was consistent with Horowitz’s international agenda.

“We all felt that Asia was an important part of the world, particularly important to Canadians, and that we couldn’t be really regarded as a major university if we didn’t have that aspect within the arts faculty, particularly,” Evans said.

Today, and for the past three decades, the university has impact on provincial and federal government relationships with Asia. “We’ve raised the level of expertise certainly within the governments, federally and provincially,” Evans said.

Ryan Dunch, chair of East Asian studies, says the program is an important growth area for the university and for the province. With year-on-year enrolment growth of about 12 per cent, the program has Dunch looking forward to its next three decades.

“I’d like to see a PhD program, more post-graduate certificate programs and things that are responsive to changing job markets and needs,” he said. “Thirty years from now we need to see a program that’s twice the size of the current department.”

Looking back on a department ahead of its time
Newsroom