Lyme-disease carrying ticks on the rise in Alberta

Edmonton a possible hotspot; 6 things to watch for. 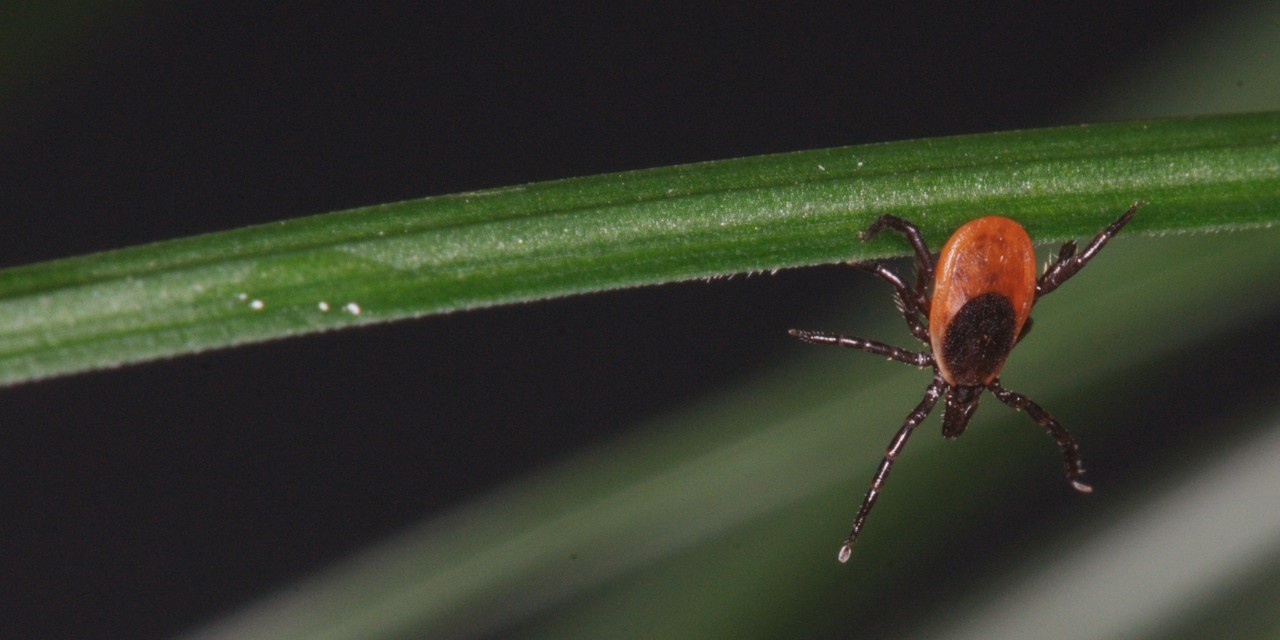 This Ixodes scapulars, also known as a black-legged or deer tick, is giving a demonstration of how it finds its host. In this ritual, known as "questing," the tick samples the air searching for ’smells’ and carbon dioxide of animals like deer or people. (Photos courtesy AFPMB via Flickr, CC BY-NC-ND 2.0)

Up to one in five Albertans bitten by ticks this summer could be at risk for Lyme disease, a University of Alberta expert says.

Once thought to be rare in the province, encounters with Lyme-carrying ticks are rising and Edmonton could be a hotspot for the pesky parasite, said entomologist Janet Sperling.

“We need to recognize that we have a problem that is getting bigger, not smaller,” said Sperling, whose son was once infected with Lyme disease. A board member of the Canadian Lyme Disease Foundation, she’s currently studying the bacteria that ticks carry, in a quest to ultimately find better long-term medical treatment for victims.

The Ixodes scapularis, also known as a black-legged or deer tick, is among those commonly found in northern Alberta. Ten to 20 per cent of the ticks now being tested in Alberta are carrying Lyme disease, so anyone bitten has a one in five to one in 10 chance of being exposed, she noted.

The infection, if not detected early and treated with antibiotics, can result in a lingering illness with debilitating arthritis and even neurological damage.

Edmonton’s river valley is a particularly attractive spot for Ixodes to live, since it provides the cool, damp environment they prefer. Deer moving along the North Saskatchewan River carry the ticks into the area. Researchers have also discovered that the insect is hitching a ride on migratory birds like robins and other songbirds from the U.S., where rates of Lyme disease are much higher.

Sperling said there’s no need to for people to panic, but Albertans need to be more aware of the risk of Lyme disease. In comparison, neighbouring provinces like Manitoba and British Columbia have much larger tick populations, she noted.

“It didn’t used to be on our radar here, but now it needs to be,” Sperling said. “We want people to enjoy being outside—they just need to pay more attention. It doesn’t mean you limit what you do, it means you have a higher awareness.”

More needs to be discovered about ticks and Lyme disease, Sperling added, but here are some need-to-know facts.

1. Clothing is the best repellent

“Clothing is the first line of defence,” said Sperling. Wear close-toed shoes, pants tucked into socks, long-sleeved shirts and light-coloured clothes, so it’s easier to spot ticks. If you are using repellent, spray it on the clothing and at the ankle, wrist and neck.

DEET sprays may help deter ticks, but they aren’t safe at concentrated levels for kids.

2. Do a check after playtime

Check yourself and your children after being outdoors. Pay close attention to areas where the bugs are most likely to hide: the scalp, hairline, belly button, underarms, beltline, the back of the knee and wherever a knapsack came in contact with the ground.

If you think you’ve been bitten by a tick, don’t ignore it. Lyme disease is easier to treat in its early stages. Make sure everyone in the family has a bath or shower after outdoors activities, and do thorough visual checks, Sperling added.

Ticks—about the size of a grain of rice—are most likely to be encountered in June at dusk and dawn. They tend to be less obvious—but still present—during the hotter months of July and August.

Domestic dogs, cats and horses are also known to be at risk of tick bites. Look for ticks around the eyes, and in their coats. “Run your hand along your pet’s body and if you feel something, investigate further. A bite will feel like a small lump,” Sperling said. Look for symptoms like lethargy and sudden joint pain and lameness. If you spot them, see your vet.

4. Look for ticks in your neighbourhood

Ticks tend to live in the bush and long grass, but they can be in your neighbourhood, too. Green spaces like dog parks and backyards have yielded ticks in Edmonton, Sperling said. One of her neighbours, for instance, found three ticks on a dog that hadn’t left the yard. Be sure to rake up dead leaves (ticks like to hide in damp leaf litter) and keep your grass cut short.

5. Know that diagnosis of Lyme disease may take awhile

With its initial flu-like symptoms, a diagnosis of Lyme disease can be easy to miss, and existing blood tests may not immediately reveal a positive reaction to infection. “It takes at least two weeks and maybe up to six weeks to produce an antibody response,” said Sperling. And the existing blood test is based on tick-borne bacterial strains found on the East Coast of the U.S., so it may not give a fully defined reaction.

6. When in doubt, see your doctor

Tell your doctor right away if you believe you’ve been bitten and discuss your symptoms, including any ‘bullseye’ rashes that develop at the bite site. Be aware that a rash can also be more widespread as it moves outward from the bite—or it can be completely absent. According to the Canadian Lyme Disease Foundation, only 30 per cent of victims experience a rash, and only nine per cent develop a bullseye rash. Be aware of other symptoms that could occur, and seek treatment right away. If you do remove a tick, save it in a plastic bag and bring it along to the doctor’s office for identification.

Lyme-disease carrying ticks on the rise in Alberta
Newsroom