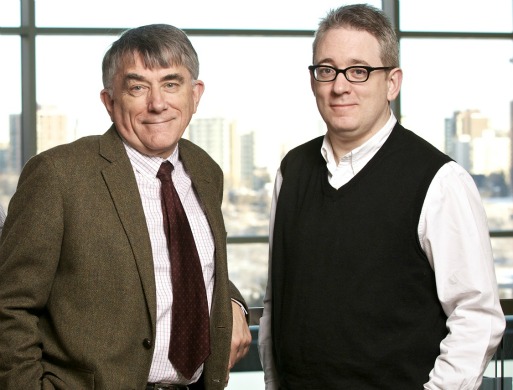 (Edmonton) Two University of Alberta researchers have been recognized by major chemistry organizations for their work on treatments for infectious medical conditions. David Bundle and Todd Lowary are U of A chemistry professors and senior researchers with the Alberta Glycomics Centre.

Bundle was recognized by the United Kingdom’s Royal Society of Chemistry, Carbohydrate Group with an appointment as the 2012 RSC Haworth Memorial lecturer. Norman Haworth won the Nobel Prize for chemistry in 1937.

Lowary is the 2012 winner of the Bernard Belleau award from the Canadian Society for Chemistry. Belleau was a Canadian biochemist known for developing a therapeutic drug for AIDS patients.

Lowary is investigating the role of carbohydrates in biological recognition between cells. He’s developing vaccines and biomarkers for the infectious disease tuberculosis. “Tuberculosis is still a significant problem in the developing world,” said Lowary.

“In the next six months we’ll be testing serum samples from TB patients against our diagnostic prototype to validate it for early identification of the TB bacteria in a person's body."

Bundle was most recently recognized for a breakthrough 3-D magnetic resonance mapping of an antibody that kills the pathogenic fungus Candida albicans. The mapping could lay the groundwork for a vaccine to stem the pathogen, which is linked to more than 70,000 bloodstream infections in North American hospital patients.

Bundle is also working on a vaccine for Brucella abortus and Brucella melitensis, a type of bacteria that passes from cattle to people through raw milk and cheese. “The World Health Organization acknowledges it’s a concern in developing countries and apparently there is a serious outbreak in China at the moment,” said Bundle. “We’ve been able to make a synthetic antigen to detect antibodies in people exposed to the disease. If it works, we may be able to convert it to a vaccine against the two Brucella species.”

Both Lowary and Bundle say the awards are recognition for their bodies of work, and reflect well on the U of A and the Alberta Glycomics Centre. “I’m originally from the UK so it’s nice to get recognition from the Royal Society of Chemistry,” said Bundle.

Lowary is also pleased by the personal recognition from his peers in Canadian chemistry and he says there’s a lasting value to awards. “It helps prove the credibility for what we’re doing and that builds a profile for potential research funders. It also helps attract students to our program.”