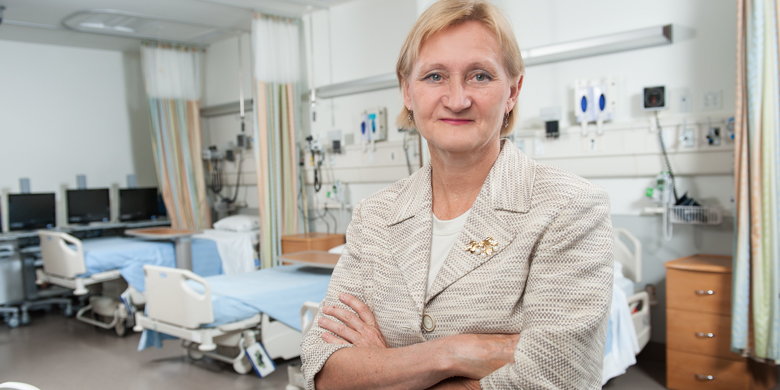 130307-donnawilson-banner
Donna Wilson led a team that studied the views of more than 1,200 Albertans on assisted suicide. Their research showed that about 77 per cent felt that dying adults should have the right to end their life early. (Photo: Richard Siemens)

(Edmonton) An overwhelming majority of Albertans believe dying adults should have the right to request to end their life, according to new research from the University of Alberta.

U of A researcher Donna Wilson led the team that studied the views of 1,203 Albertans on assisted suicide, currently illegal in Canada. A majority—77.4 per cent—felt dying adults should have the right to end their life early.

“Increasingly, there are countries or states where they are allowing assisted suicide or euthanasia. Like many of those countries, Canada will have to grapple with this question,” said Wilson, a professor in the Faculty of Nursing. “Until this point, nobody has asked the public, and that’s a very important perspective.”

Wilson, an expert in aging and end-of-life care, used data gathered in a 2010 health-care survey by the U of A’s Population Research Laboratory. When asked, “Should dying adults be able to request and get help from others to end their life early?” a total of 36.8 per cent of respondents answered yes outright.

Another 40.6 per cent of respondents indicated yes, but with the qualification that assisted suicide “should only be allowed in certain cases or situations.” The remaining 22.6 per cent answered no.

“You have these preconceived images of Albertans, but Alberta is a very young province—the youngest in Canada—and we really value autonomy and independence,” she said. “A lot of people realize that, ‘If I were dying, I’d want to be able to say, look, end it now. I might not want it in the end, but it would be nice to have that option.’”

The survey data show personal experience helps shape opinions on assisted suicide. Individuals who have been involved in a decision to stop or not start life-supporting treatment were 79.8 per cent in support. Even greater support—81 per cent—was observed among those who have euthanized a pet.

“It’s not just some abstract answer that ‘this isn’t right,’” Wilson said. “These are people with important experiences that made them much more open to assisted suicide.”

Respondents who opposed assisted suicide were more likely to be less educated (39.8 per cent did not complete high school) and to have strong religious beliefs. Some 40 per cent of Protestants answered no, as did 35 per cent of Catholics and 44.3 per cent of those in the “other religions” category—a group that includes Christians, Muslims, Hindus and Jews.

Wilson’s research, which was published in the March issue of Health and Social Care in the Community, comes at a time when the federal government is appealing the B.C. Supreme Court ruling to allow Gloria Taylor, who had late-stage ALS, a constitutional exemption to proceed with physician-assisted suicide. A Quebec panel has also called on that provincial government to allow “medical assistance to die.”

Wilson said she is not calling for legal changes, but cautions that if laws are changed to allow assisted suicide, it will be paramount to learn from the experiences of other countries to satisfy concerns about safety, the impact on health professionals and fears of abuse of power.

“With 77 per cent of people saying it’s OK to do it, it’s not going to go away—Canada is going to keep talking about euthanasia,” Wilson said, noting the number of deaths in Canada is expected to double over the next two or three decades, which could further influence support.

“The discussion is here, so now is really an important time to see what happens in other countries where they allow it. If we’re going to do it, let’s do it the best we can, and until then, don’t go there and don’t jump into this lightly."

Wilson’s research was funded by the Canadian Institutes of Health Research.