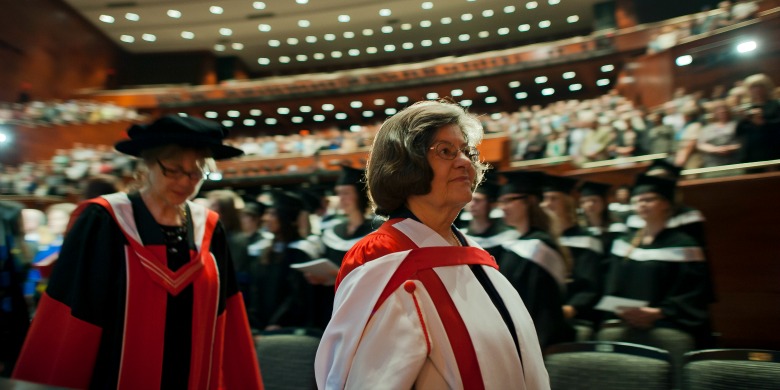 (Edmonton) Born into humble beginnings in a log house in the Saskatchewan bush, Sharon Butala vowed that when she grew up, she would not be poor, but ambitious and successful.

As an accomplished writer about rural prairie life, Butala, 72, has reached that goal, but not without surprises and lessons along the way, she told the University of Alberta class of 2013. As she received an honorary doctor of letters degree from Augustana Campus June 2 and spoke again to convocating classes June 5 at the Northern Alberta Jubilee Auditorium, Butala urged the new grads to strive for “wisdom, understanding and patience” in life’s journey.

“The best thing one can do to prepare oneself for life is to work toward achieving a calm attitude of mind toward our whole condition as humans,” she told students from the U of A Faculty of Arts, Faculty of Rehabilitation Medicine and School of Public Health.

During a 30-year career as an award-winning author, Butala, who is also a Saskatchewan rancher, has written extensively about life on the Canadian prairies. Both environmentalist and feminist in her perspective, Butala has penned 16 books, including bestsellers The Perfection of the Morning (1994), Coyote’s Morning Cry (1995), Wild Stone Heart (2000) and Lilac Moon: Dreaming of the Real West (2005)—along with many articles, essays and plays. An officer of the Order of Canada and a 2012 recipient of the Kloppenburg Award for Literary Achievement, she has been shortlisted for both the Governor General’s Awards and the Commonwealth Writer’s Prize.

As a youngster, Butala wanted to write, and then to become a visual artist, but both dreams fell by the wayside as she sought a place in the middle class “by conventional means.” She earned arts and teaching degrees in Saskatchewan and became an educator for nearly 20 years, supporting a child and paying a mortgage.

It wasn’t until age 38 that she returned to her desire to write, married a cattle rancher and moved to the isolated grasslands of Saskatchewan, leaving behind a job, a house, friends and family to follow her passion. “This time I knew it when I found it for what it was: the very thing I was meant to do.”

Butala urged her listeners to make room for creativity, even as they tend to the everyday commitment of careers and workaday life.

“Try not to let ‘making a living’ or being a success overwhelm you, possess you entirely, but leave room for that creative urge that lives inside all of us and will express itself in myriad ways if we allow it. To stifle it completely, is to stifle the soul.”