Setting aside grassland for the busy insects can pay dividends for Alberta farmers and ranchers, say researchers. 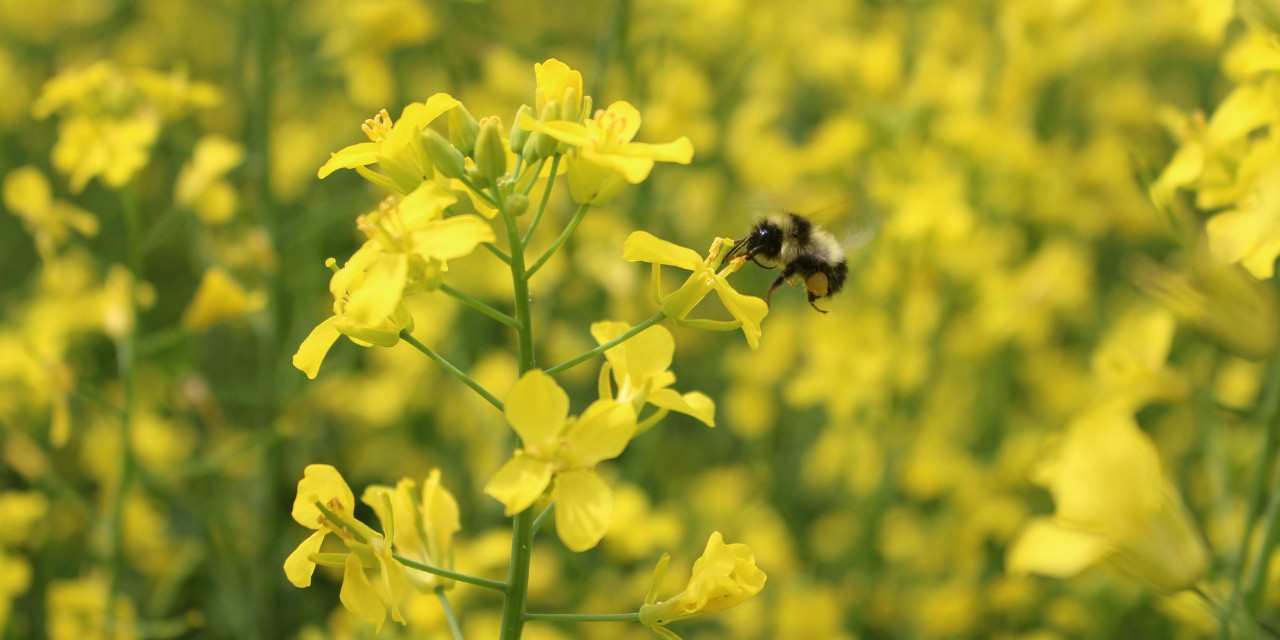 Farmers and ranchers should be buzzed about bees and making room for the busy little insect in their land management, say University of Alberta researchers who are leading one of the first studies to establish baseline data about bees across Alberta.

They found that regions with more grasslands harboured higher numbers and more kinds of bees, as opposed to cropland.

“Native grassland provides a broader diversity of food and nesting sites because there’s less soil disturbance and more natural vegetation,” said Monica Kohler, who worked on the research project for her master’s degree.

The researchers, led by rangeland ecologist Cameron Carlyle, an assistant professor in the Faculty of Agricultural, Life & Environmental Sciences, and Jessamyn Manson an assistant professor at the University of Virginia, wanted to find out how agricultural development affects the bees in Alberta, given that globally, the insect’s numbers are falling.

Carlyle, Manson and their graduate students, including Kohler, collected 20,000 of the insects over two years. They found almost 200 native species from both cultivated land used for canola and grasslands used for cattle grazing, across 68 sites ranging from the province’s southern border to the Peace country in northern Alberta.

The insects, which come in many shapes and sizes—Canada alone boasts 800 species—are critical for plant reproduction. Eighty-seven per cent of flowering plants benefit from animal pollination, including Canadian staple crops like canola and alfalfa, and in other parts of the world, almonds, apples, berries, squash, coffee and cocoa plants. In return, flowering plants provide nests and food for the insect.

In other parts of North America, bumblebee populations have declined by as much as 96 per cent, but there’s a lack of data for the Canadian prairies to track whether the same declines are happening here.

The research uncovered how different kinds of bees responded to land use: some bees were found mostly in grasslands, while others weren’t. That means conservation efforts will need to account for those different responses, Kohler noted. “One solution isn’t going to work for every single bee. We can’t generalize across groups of species.”

“This means those areas not only support bees, but also provide a more sustainable source of forage for cattle,” Carlyle added. “This suggests we can manage grazing land not only for cattle, but for the benefit of bees, too.”

He now plans to further explore just how bees are giving back to rangelands in terms of plant diversity and forage nutrition and quantity. “Bees and plants have a long history of co-evolution; it’s important to remember this relationship when we look at the benefits and resources grasslands provide.”

The research was funded by the Alberta Livestock and Meat Agency, Alberta Biodiversity Monitoring Institute, Alberta Conservation Association, and Natural Sciences and Engineering Research Council and by the U of A.