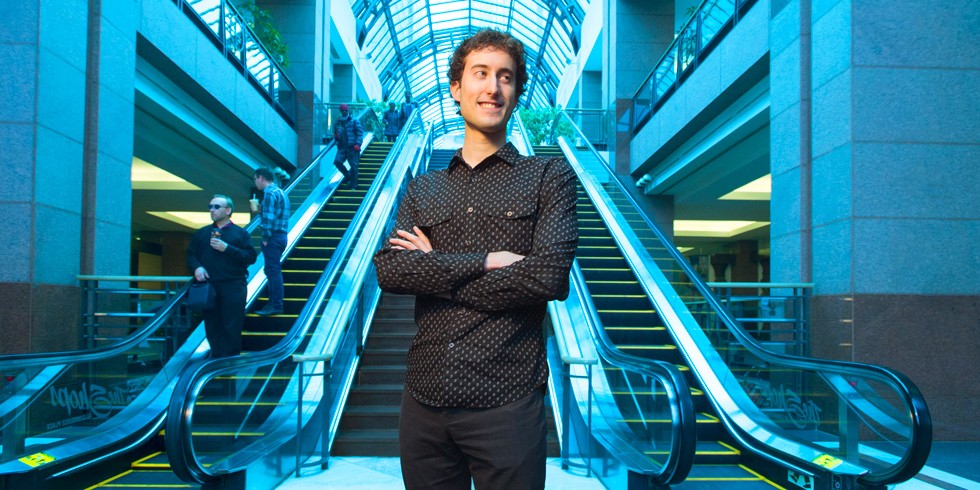 Sean Graham has an idea for changing how elections work in Canada—and it will be one of five options on the ballot in Prince Edward Island's plebiscite on electoral reform. (Photo: Richard Siemens)

Prince Edward Island voters are heading to the polls starting tomorrow to vote on whether to reform their election system—and an idea from a political science student from the University of Alberta will be on the ballot.

Sean Graham’s proposal, called “dual member proportional representation,” is up for consideration in P.E.I. and will be offered along with four others—including the status quo—on a provincewide plebiscite that will be held between Oct. 29 and Nov. 7.

With dual member proportional representation, each riding elects not one, but two members to the legislature. But the total number of ridings is cut in half, resulting in the same number of members overall.

Parties run candidates in teams of two, who appear together on the ballot. The first seat in the riding is allocated in the conventional way, with the party that gets the most votes sending its first name on the ballot to the legislature. The second seat is assigned using a formula that more accurately reflects the popular vote.

"Under the current system in Canada, based on calculations done over the past 20 or 30 years, more than 50 per cent of the votes end up not translating into someone actually winning a seat,” said Graham. “Whereas if you go to a good proportional system, you can get upwards of 95 per cent of the votes actually counting toward someone winning."

PEI has a history of electing lopsided legislatures, said Graham, in some cases giving every seat to the winning party, even with almost half the popular vote siding with the opposition. Needless to say, there was considerable pressure on the province to fix that.

When Graham noticed in the news that PEI was soliciting proposals, he sent in his idea—developed on his own with funding from the U of A's Undergraduate Research Initiative following a discussion in one of his political science classes.

"I wanted to develop a system that would give us better results than others under consideration, but also one that would be acceptable to most Canadians,” said Graham, who now works as a research and policy intern with Economic Development and Trade Alberta, after graduating with a second degree in math last year.

The pitch he sent to PEI officials included a computer program that distributes seats, according to his formula, based on past election results. It was flagged by the review committee, "and that's the point where it really took off," he said.

“No electoral system can address all the issues and principles that deserve to be considered,” said U of A political scientist Steve Patten. “But, in my opinion, DMP should be considered a leading option because it maintains the clarity of local representation and accountability of our current system, while achieving results that are closer to true proportionality in party representation.

“It also presents voters with a simple and easy-to-understand ballot.”

If Graham’s electoral formula does win the plebiscite, he says he hopes it will catch the attention of the federal government—that is, if the Liberals choose to go ahead with electoral reform.

Prime Minister Justin Trudeau promised it in the last election, vowing to either scrap or amend the first-past-the-post model we have now in favour of more proportional representation, which would give those who don’t vote for the winning party a greater voice in Parliament.

Last week, however, Trudeau signalled he might back away from that promise, claiming that, while Canadians might desire change, they’re also leery of just what it could look like.

In Graham’s view, however, change is a long time coming.

"It would be very satisfying to tell people in future elections that no matter where you are, no matter what you cast your vote for, it's going to mean something. The voting process is one of the most essential processes we have in our democracy, and to have my work reflected in that would be a huge honour."