Making strides: paraplegic steps out in support of N.E.R.D. Run 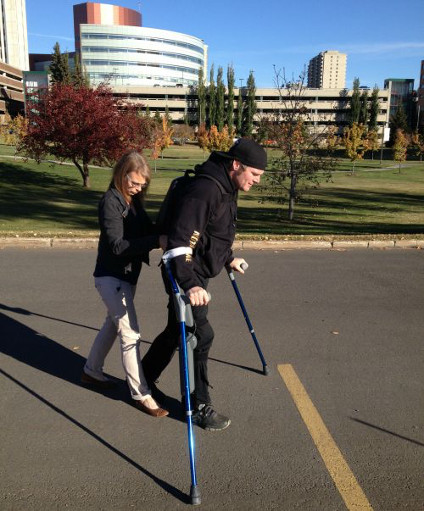 Taking it to the street: Denny Ross and his "robot suit" train for the N.E.R.D. Run.

ReWalk Robotics exoskeleton to be demonstrated at event raising awareness of Neuroscience and Mental Health Institute.

(Edmonton) Just five years ago, Denny Ross couldn’t imagine standing again, let alone walking. Paralyzed from the chest down after a motor vehicle accident, Ross thought the simple freedom of going for a walk had been taken from him forever. Today he’s preparing for a five-kilometre race.

“Just a couple of years ago, I was looking at getting a stand-up wheelchair,” says Ross. “Now here I am today with an exoskeleton and I’m going to attempt a five-kilometre run with it. That’s crazy stuff!”

Ross is part of a University of Alberta pilot study looking at how people benefit from a revolutionary exoskeleton named ReWalk that provides powered hip and knee motion. It was purchased by the Spinal Cord Injury Treatment Centre Society in 2014 and then leased to the U of A for just one dollar. Since joining the project in 2014, Ross has gone from taking baby steps in his so-called “robot suit” to walking more than a kilometre at a time. Now he’s stepping up his efforts at the upcoming N.E.R.D. Run hosted by the U of A’s Neuroscience and Mental Health Institute (NMHI) Sept. 19 at Hawrelak Park.

“I’m going to go as far as I can and then I’ll wheel the rest of the way. I’m definitely going to finish,” says Ross. “It’s important to be out and seen so that people can understand what is being done by U of A researchers, what the money being raised is going towards and how much it is helping people like me.”

The N.E.R.D. Run is a fundraising and community outreach event put on each year by NMHI. Money raised from the run goes toward supporting student researchers at the institute.

The ReWalk study is one of hundreds undertaken by NMHI members each year. The institute brings together researchers from numerous fields to seek solutions to neurological and psychiatric disorders that touch everyone, whether directly or indirectly. The scope of research includes everything from mental illness and spinal injury to neurodegenerative diseases such as Alzheimer’s and multiple sclerosis.

Karim Fouad, NMHI’s director of operations and basic research, says researchers in the institute can accomplish together what they cannot individually. He also believes a key to finding answers is involving the community through events like the N.E.R.D. Run.

“The research is important, but at the same time we have to help improve the quality of life of people. To do that, you actually have to meet these people and learn what they really need and want,” explains Fouad. “You cannot just live in your ivory tower. It’s really important to talk to the community and to break down barriers.”

“We want people to know the kinds of things we’re interested in, the work we are doing, and that we are trying to make a contribution,” adds Jaynie Yang, a professor of physical therapy who is leading the ReWalk study. “The institute really has such a large scope of work, and some of it is so invisible [to the public]. We want people to become aware and to know that anybody can help [move the research forward].

As for Ross, he’s looking forward to demonstrating the mobility he’s regained through ReWalk at the N.E.R.D. Run. In just one year of use it’s already become a life-changing device for him, and he can’t wait to show it off.

“I imagine there will probably be some people who follow me around—at least at the beginning. And I’ll definitely be having a few conversations on the way,” Ross says with a smile.

“People should come and check me out!”

The N.E.R.D. Run is being held in Hawrelak Park on Sept. 19 at 9 a.m. Sponsors of this year’s run include Coke, K & K Foodliner and Artistic Bakery.

To register or donate to the event, visit thenerdrun.ca