Making the most of possibilities 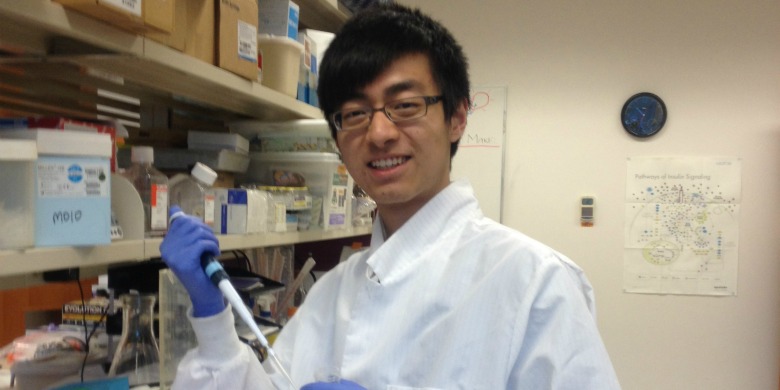 120611-dannyhuang-banner
Danny Huang's summer internship in a UAlberta laboratory led to a two-year cancer research project and a string of awards at a national science fair.

(Edmonton) Where and when a person’s potential is unleashed depends on a host of factors, but among the most important is opportunity.

Two years ago, Danny Huang was a bright high-school student brimming with promise, when opportunity came knocking in the form of the University of Alberta’s Heritage Youth Researcher Summer Program. Funded by Alberta Innovates – Health Solutions, the program gives dozens of Alberta high-school students a summer internship in a U of A laboratory setting, performing real-world research.

Huang landed in Sujata Persad’s pediatric oncology lab, where he ended up spending two years on a study that identified a mechanism by which a sugar attaches to a potent cancer-promoting protein after that protein is synthesized—a mechanism that may suppress prostate cancer.

His work on the project saw him present at numerous local, provincial and national conferences and competitions, including the Canada-Wide Science Fair, where his research was awarded Best in Fair, Gold Medal in Category and Platinum Award. He was also chosen as one of 90 finalists at the worldwide Google Science Fair. Huang also co-wrote a chapter published in the peer-reviewed textbook, Prostate Cancer: From Bench to Bedside.

“This was a collaborative effort with not only Dr. Persad, but also the grad students and lab technicians, and it feels good to know that I was able to play an integral role in the project,” said Huang, who has recently finished up his first year in biological sciences and is looking toward a career as a clinical scientist. “The gratification that emerges from being a part of a team that does top-notch research is both fulfilling and motivating.”

He added, “The U of A has been instrumental to my successes. My work would not have been possible if not for the support of the Persad Laboratory.”

His successes in the laboratory and at science fairs tell only part of the story. On June 7, Huang was named one of Canada’s Top 20 Under Twenty by Youth in Motion, a national organization designed to develop and implement dynamic programs for youth. The award honours young Canadians who are under the age of 20 and have demonstrated significant levels of innovation, leadership and achievement.

During his time as a research student at the pediatric oncology lab, Huang co-founded TeamUP Science, which established three science programs aimed to inspire under-represented youth in academic and scientific discovery.

Then, while participating in the Canada-Wide Science Fair in Toronto last April, Huang talked to some of his peers and found that many of them were active in the Kids Help Phone.

“As a result, I saw this as an opportunity to augment mental health awareness back at home, so I pitched the idea of forming a students’ association to the local Kids Help Phone director,” he said.

Today, Huang is part of a team that works with the Edmonton Kids Help Phone to raise funds and spotlight the importance of mental health education.

“At the U of A there are endless possibilities that emerge here; I like the exciting programs constantly offered, and the learning atmosphere it fosters,” he said.

Making the most of possibilities
Newsroom