Mandels honoured through endowment at University of Alberta 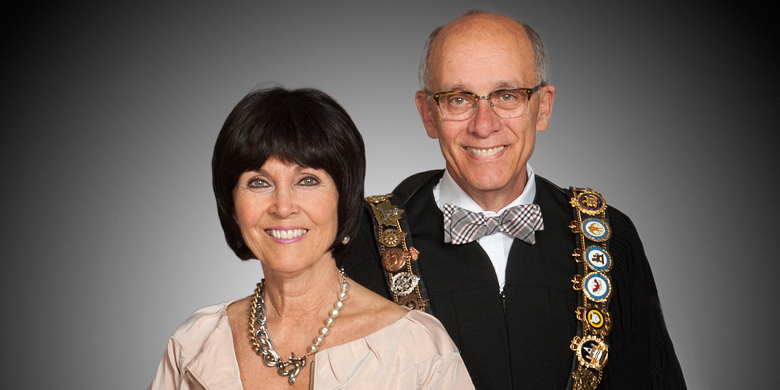 131031-mandels-banner
Stephen and Lynn Mandel's public service, community leadership and philanthropy will be honoured through an endowment at the University of Alberta. (Photo: Richard Siemens)

(Edmonton) University of Alberta students of political science, fine arts and performing arts will soon be supported in their studies through an endowment honouring the public service, community leadership and philanthropy of Stephen and Lynn Mandel over the past 12 years.

The endowment goal is $250,000, and once fully funded the endowment will support three students every year. The financial support can be awarded to students as a scholarship based on educational achievement or as a bursary based on financial need.

The campaign to create the endowment is spearheaded by U of A alumni Irv Kipnes, '59 BSc, '09 LLD (Hon.), and Ralph Young, '73 MBA. More than 40 friends and colleagues of the Mandels have already donated.

“In my mind, this is the perfect way to honour Stephen and Lynn’s contributions to our city,” said Young, U of A chancellor and a longtime friend of the Mandels. “They supported the arts, they had a passion for young people, and they always recognized the importance of the University of Alberta to the vibrancy of our city.

“They gave so much of themselves over the past nine years, it is fitting that this will live on in perpetuity and help young people realize their potential and give back to our community.”

“We are so honoured by this contribution,” said U of A President Indira Samarasekera. “Stephen has shown such leadership and support for young people and for the University of Alberta during his term, he has further deepened our connection with the city and our community.”

Lesley Cormack, dean of arts at the U of A, said, “Arts graduates make a valuable and profound contribution to public and community life, and the legacy of the Mandels both to inspire and to make a practical difference is so fittingly recognized by establishing an endowment in their name.”

Contributions to the endowment can be made at www.giving.ualberta.ca/mandel

During his nine years as Edmonton's mayor, Stephen Mandel’s passion and support for the arts, public service, post-secondary education and young people manifested through the growth of the Mayor’s Evening for the Arts, his support for the Alberta Art Gallery, the creation of the NextGen committee and iHuman, and the move of the provincial museum and arenas downtown, and of the U of A into Enterprise Square.

Mandels honoured through endowment at University of Alberta
Newsroom