Mayor proud of the 'partnership that never stops' 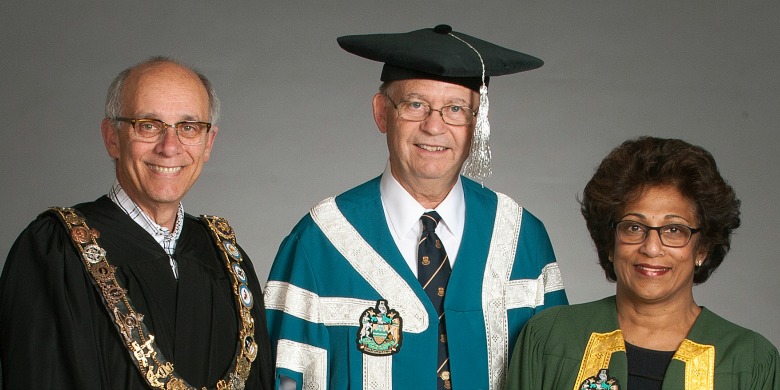 (Edmonton) When asked about the impact his best golfing buddy and outgoing Edmonton mayor Stephen Mandel had on the University of Alberta during his tenure with the city, U of A chancellor Ralph Young begins with a citation from the book The Rise of the Creative Class by Richard Florida.

From the time he took over the city’s top post in October 2004, Mandel’s vision of a creative, flourishing capital meant hitching much of the city’s fortunes to an unwavering belief that as the university goes, so goes the city.

“The billions in economic development, 40,000 students, the research it develops, the interaction with the city when we need to do things, the co-operation, the quality of life it brings, the arts and the culture it brings—you can’t get a greater prize for a city than the University of Alberta,” he said.

One of his earliest undertakings as mayor was championing the university’s move into Edmonton’s downtown core. At the 2008 grand opening of the $86.5-million renovation of the old Bay Building into what became Enterprise Square, Mandel said the move would transform the city’s heart.

The unveiling of Enterprise Square came in the midst of the year-and-a-half-long bash that was the university’s centenary, during which Mandel became a fixture at a number of U of A festivities, including a special ceremony at City Hall in May.

“The University of Alberta has grown and thrived in step with our city for each of its 100 years,” said Mandel. “Great universities go together with great cities, and as we grow together we can create a much more dynamic and creative university, and city.”

And grow the university has. Mandel’s time in office is marked by unprecedented physical growth, with the city partnering to various degrees on a number of construction projects, the most notable of which is the Edmonton Clinic Health Academy. However, Mandel says that although the milestones and the strengthening bond between the city and the university over the course of his stay in office make for fond memories, the aspect of the U of A that he is most proud of is the behind-the-scenes work that was done in support of Edmontonians.

“Whether we did a study on community safety or homelessness, the university helped us out. We now have a number of programs where students work with the city to deal with some of the inner-city problems; the list goes on and on,” he said. “The ongoing dialogue we’ve always had with the university on any number of topics, from the importance of research to the city to supporting research efforts, has always been productive—it’s the partnership that never stops.”

Mandel says his relationship with the university goes far beyond a partnership to become personal, citing his affinity for the U of A’s entire senior administration team, particularly university provost Carl Amrhein, who is currently on leave, and President Indira Samarasekera, whose introduction to the role of university president came less than a year after Mandel’s transition to mayor.

“As president, I have had many opportunities to work with Mayor Mandel, and have always been struck by his commitment to Edmonton and Edmontonians, his vision for the city and his level of engagement with the university,” said Samarasekera. “As an outstanding champion for both the City of Edmonton and the University of Alberta, Mayor Mandel recognized that great cities need great universities, and great universities need great cities.”

Mandel, who will step down shortly after the Oct. 21 civic election, says he is not sure what the future holds, but he will support the university going forward in any way he can.

“The fact is, I am a tremendous believer in the University of Alberta and the research that it does. It is an integral part of not just the economic fabric, but also the social fabric. I think if people did a survey about what is the most important institution in the city, number one would be the university.”

Mayor proud of the 'partnership that never stops'
Newsroom