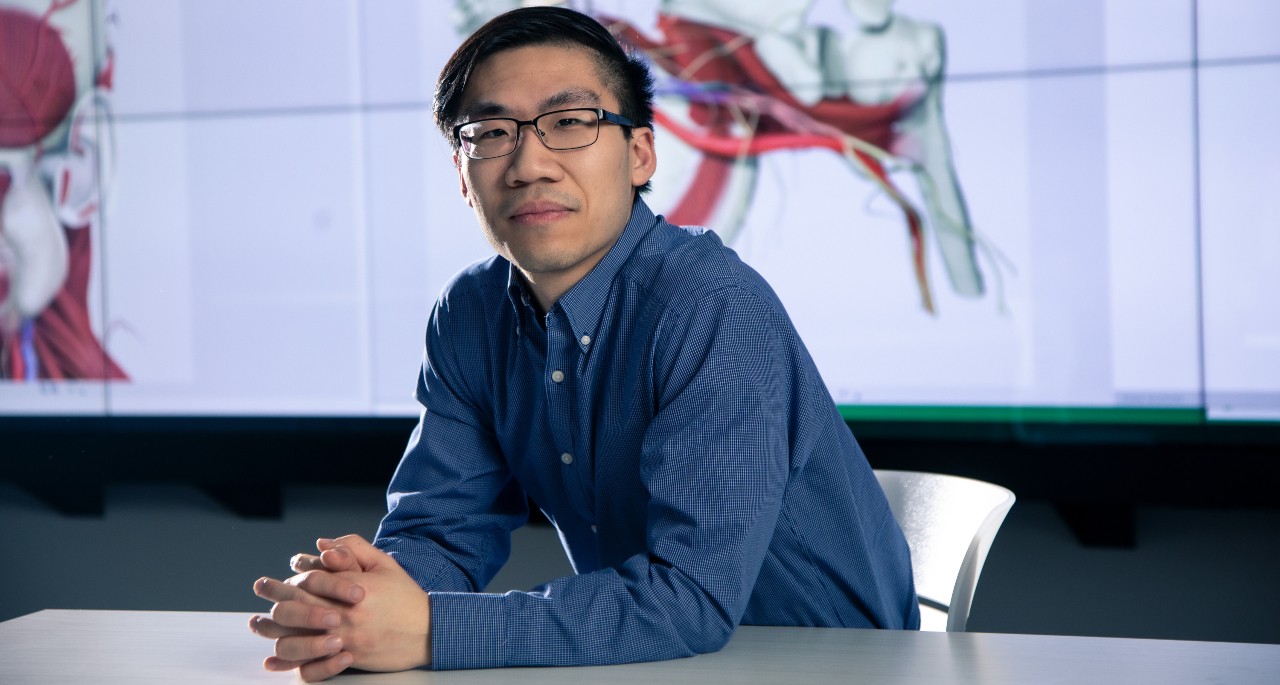 As president of the Canadian Federation of Medical Students, Victor Do is playing a key role in promoting wellness for physicians and retooling medical school programs to adapt to the COVID-19 pandemic. (Photo: Laughing Dog Photography)

Victor Do does not seek out the spotlight. But it finds him anyway—whether he is stepping onto the ice at a figure skating competition, entering the fray as a student leader or following his path as a soon-to-graduate medical student at the University of Alberta.

Do credits his parents with teaching him his fierce work ethic, but they’re too humble to even have their names in Folio. “They like to stay out of the limelight,” he said. “We’re such a close family unit—we’re just the Do family.”

After war broke out in Vietnam, they escaped to Canada as refugees, settling in Edmonton thanks to the kindness of strangers. He worked as a labourer and she worked as a bookkeeper to establish a new life for themselves and their only son.

“For a long time we didn’t talk much about their struggles, but I think there’s added pride for everyone in terms of what we’ve been able to do together,” said Do, 24, who is the first in his family to graduate from university.

It was in Edmonton in those early years that they honed their unofficial family mantra: “No one will outwork us.”

“I’m not smarter than anyone else,” Do said. “If there’s anything, maybe I roll up my sleeves a little bit more and get a little dirtier in the process. I’m really proud of that being something that I'm known for in the work that I do.

“Those are the values I hold from my parents, especially my mom—she’s really driven. “

Do’s parents wanted their son to learn to skate but worried he was too small for hockey, so they signed him up at the Ice Palace Figure Skating Club at West Edmonton Mall.

“It started as that quintessential immigrant parent thing to do—make your kid Canadian by putting them in something that Canadians do,” Do said. “My parents don’t skate—they were too scared to go on the ice—but they would always be with me at the rink. It was our family thing.”

And Victor took to the frozen water like a natural. “I loved the feeling of being on the ice,” he said. “I loved how I felt so in control and at the same time often so vulnerable as a competitor.”

Do said the fact he got to miss school to travel to increasingly difficult competitions, eventually representing Alberta at junior nationals, increased the cool factor with his friends. Although Do said he was never of international calibre, teammate Kaetlyn Osmond later went on to win three Olympic medals.

“Figure skating and the skill sets that I learned from skating, like working through challenges and setting goals, certainly shaped who I am today,” Do said.

“At any point your blades can slip from under you no matter how perfectly things are going. For us that's an analogy of how you want to go about things in life, about your ability to adjust to change.”

The family developed another one of their sayings: ”Ice is slippery.”

“The ice often seems more slippery to the person who is not prepared.”

That approach really helped Do when his skating career came to an abrupt end, just as he was heading to the U of A. He decided to focus on his studies, tackling first a science degree in physiology and then an MD.

“I told myself I was just going to clamp down and study and hopefully make it through,” Do said. “I think we use the term ‘imposter syndrome’ for how I was feeling, like someone had made a mistake by letting me in.”

But Do’s family credo won out. Friends encouraged the former high-school student council member to get involved in U of A student politics.

“It’s a core value to me to give back to the community and have a strong voice to make things better for other students,” he said. “It wasn’t me to sit on the sideline.”

In 2017 he met the late dean Richard Fedorak, who encouraged U of A students to get involved at the national level. Do served in several positions on the Canadian Federation of Medical Students (CFMS) board, and last year became the fourth-ever U of A student to be elected CFMS president in its 43-year history.

“I remember Dr. Fedorak saying it was important for U of A students to share our knowledge and strengths and have a national voice,” Do said. “This was one of the things that pushed me to run and something I have thought of in each of my subsequent election decisions.”

Do has been helping the CFMS develop a health promotion charter for physicians and medical students.

“Studies show that physicians being unwell costs the system and results in worse patient outcomes, and of course we must consider the personal costs,” said Do. “Three years ago (when he first joined CFMS) there was little talk about physician wellness. Now there’s a whole movement.”

“Creating a more positive, health-promoting culture in medicine is certainly one of my goals.”

When COVID-19 hit, the CFMS was at the centre of the discussion about how to adapt medical education.

“We’ve spent the last eight weeks on full press, retooling all medical school programs, making huge changes to the schedule for the class of 2021, how we will interview students for residency positions, and so on,” said Do, who spends up to 35 hours a week on video conference calls for CFMS along with completing his own studies.

“These are full-scale changes that never would have happened for many years had it not been for the pandemic. It’s really tapped my change management skills, trying to reassure people along the way. It’s critical that students feel they are being represented.”

Do will continue to have a voice as he moves to a role as past president and board chair of the CFMS this fall, and also takes up a one-year term on the board of the Canadian Medical Association.

“A lot of amazing work has been done in Canada during the pandemic, but clearly, whether it be personal protective equipment or testing capacity or long-term care—something slowed us down,” said Do. “Our health-care system needs to learn those lessons and adapt.”

After seven years at the U of A, the newly minted Dr. Do will continue his learning during his pediatrics residency at Sick Kids Hospital in Toronto. He figures he chose pediatrics in part because of his positive experiences as a volunteer CanSkate coach in his teens.

“One of my early interactions in the pediatric clinic was with a patient who was excited for his first skating lesson, so I got to connect with him on that,” said Do. “That re-sparked my interest and joy in skating again.”

Do said he loves working not only with children, but with their parents too.

“There isn’t just one patient,” he said. “It’s helping the whole family unit get through something.”

Do hopes to return to the U of A in the future. Along with his parents and “amazing” friends, he credits mentors Lisa Hornburger, Melanie Lewis and Lyn Sonnenberg for guiding him toward success. Do foresees a role in academia and administration for himself.

“I’ll always want to do clinical work, because I love interacting with patients and families,” Do said. “But I'm drawn into systems thinking and working with how we make systemic change.”

“I’ve always been a person who’s thought about how you can make an impact beyond yourself or the people you can see.”

Do feels for his own parents and the parents of other grads who will not get to attend an in-person convocation after supporting their students through so many years of schooling.

“You don’t necessarily feel like you’ve closed the book, but that may not be a bad thing,” Do said.