Measuring the impact of frailty in Alberta’s intensive care units 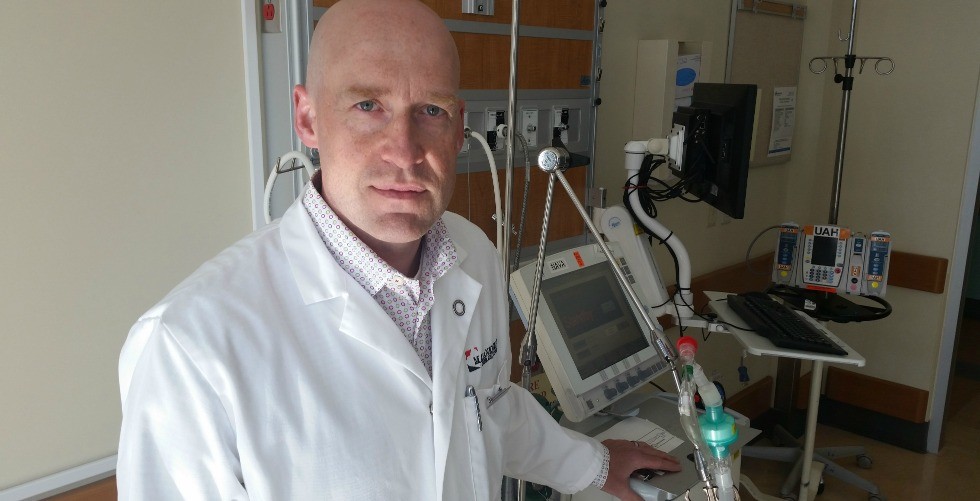 Sean Bagshaw's research revealed that frailty is common among critically ill adults in intensive care units, and may be a factor in why they became critically ill in the first place.

(Edmonton) Since arriving at the University of Alberta seven years ago, Sean Bagshaw has spent each day searching for ways to deliver better health outcomes to patients with critical illness. Lately, the associate professor in the Faculty of Medicine & Dentistry has focused his efforts on measuring the impact of frailty among patients admitted to intensive care units in Alberta. That focus has now been rewarded, as Bagshaw has been honoured with the Australia and New Zealand Intensive Care Society (ANZICS) Global Rising Star award.

“This is a very flattering and distinctive honour,” says Bagshaw, who also works as an intensivist in the Division of Critical Care Medicine at the U of A Hospital and is an adjunct professor in the U of A's School of Public Health. “It’s nice to be acknowledged by your peers and to know that your contributions have meaning.”

Bagshaw’s research, published this past November in the Canadian Medical Association Journal, objectively measured for frailty among more than 400 critically ill adults, aged 50 years or older, at six hospitals across Alberta between February 2010 and July 2011. The study showed that frailty was common among critically ill patients, evident in about one-third of the cohort prior to ICU admission. Frail patients were typically older, more likely to be female and more likely to have one or more chronic conditions and disabilities in addition to their acute health problems.

But according to Bagshaw, frailty is not just limited to the elderly.

“It’s often viewed as a geriatric syndrome, but my belief is that a frail state among patients, in particular younger patients, may predispose them to a greater susceptibility to developing critical illness in the first place. So in essence, frailty may ‘age-shift’ their vulnerability to developing critical illness, as these patients are characterized by less reserves to respond to acute stress.”

The study also showed that in-hospital mortality was higher among frail patients than among those who were not frail (32 per cent versus 16 per cent), and remained higher one year after initial ICU admission (48 per cent versus 25 per cent). Compared with survivors who weren't frail, those with frailty were more likely to acquire new disabilities and become functionally dependent (71 per cent versus 52 per cent). Frail survivors also had poorer quality of life and more often required hospital readmission (56 per cent versus 39 per cent).

Although the concept of frailty is well known among older patients and has been evaluated among patients undergoing elective surgery, Bagshaw says, previous research has never focused on patients entering the ICU.

Bagshaw hopes the findings could lead to improved delivery of clinical care. “We believe our findings will provide clinicians with a bedside tool to objectively assess whether a critically ill patient is indeed frail. We hope the findings from our study will provide new knowledge to clinicians to better inform patients and families about the prognosis for survival and recovery from critical illness, help in decision making about patient preferences for clinical care and appropriately match resources to the needs of patients.”

Bagshaw believes frailty should be measured routinely among patients as they enter the ICU. He is now working with the Alberta Health Services Critical Care Strategic Clinical Network toward integrating a standardized frailty assessment for patients admitted to intensive care units across Alberta.

“If we are able to better identify these vulnerable patients, we will be more prepared when we engage patients and families about treatment preferences and goals of care, and about their expectations for quality survival and functional recovery. We can better inform patients and families about whether they will survive, and if they do, what they can expect during their recovery.”

The ANZICS Global Rising Star award aims to identify promising and innovative young clinician scientists contributing to the field of intensive care medicine. Three monetary prizes are awarded annually to the top contributors in the Americas, Europe and Asia.

As part of the honour, Bagshaw will travel to the 39th ANZICS/ACCCN Annual Scientific Meeting in Melbourne, Australia, later this month. There he will present his findings on the association between frailty and health outcomes among critically ill patients.