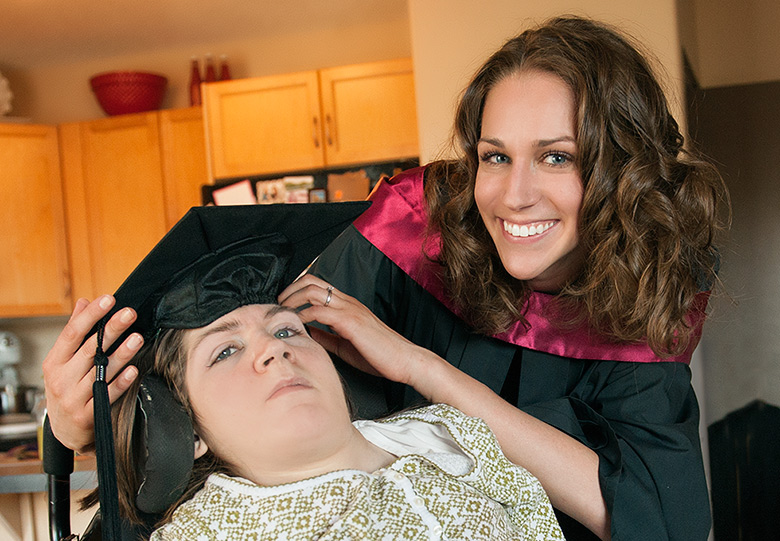 130607-shannon-sarro-banner
Shannon Sarro lets her sister Erin try on her convocation cap. Shannon credits Erin for inspiring her passion for medicine and determination to become a doctor. (Photo: Richard Siemens)

(Edmonton) When Shannon Sarro walks across the stage to receive her medical degree June 7, she’ll be thinking of her younger sister Erin, whose lifelong health struggles inspired Sarro to pursue a career in medicine.

Two weeks after Erin was born, she had a SIDS-like experience in which she stopped breathing. The family rushed her to the hospital and she survived but suffered permanent damage. Erin was diagnosed with spastic quadriplegic cerebral palsy, with epilepsy, and a development delay.

She is now 23 years old, but her permanent cognitive function is equivalent to that of a baby between one and three months old. She is unable to speak; she cries when she is upset and smiles when she is happy. Most people with Erin’s condition don’t live into their twenties—physicians repeatedly told the family over the years that she would only live another two to three years—but she has exceeded everyone’s expectations.

When Shannon was in Grade 10, Erin became seriously ill.

“We all knew she was very ill and because she’s non-verbal, she couldn’t talk or gesture or communicate to tell us what was wrong. It’s scary when you can’t communicate with someone who is seriously ill.

“When we took her to the hospital, the doctors ran all these tests and used their clinical acumen or magic, and pinpointed what was wrong—a bowel obstruction—and explained what they were going to do to fix it. They were so direct and clear, and it was such a feeling of relief to us that they figured out what was wrong with her and that they could help.

“She became so much better so quickly, and that’s when I thought, ‘That’s what I want to do.’ Patients’ families can come in so panicked and upset, thinking their relative is very ill, and a doctor can figure out what’s wrong and make the issue so solvable. So I attribute my passion for medicine to my sister.”

The road to achieving Shannon’s dream took determination and careful planning, considering her family couldn’t afford to put her through school. Shannon’s father is a garbageman, who is set to retire this year, and her mom stayed at home to care for Erin and raise all three of the couple’s children. Shannon did her research and knew she would need tens of thousands of dollars to make her dream a reality. She looked at scholarships and awards programs, and knew she needed top marks and lots of volunteer hours. So Shannon spent her time helping her family, caring for Erin, studying and volunteering 10 to 12 hours a week throughout high school. She coached basketball and soccer teams, led a swim club at her sister’s school, engaged in mealtime chats with seniors who suffer dementia as part of a volunteer supper club, served cookies at Canadian Blood Services, volunteered for Big Brothers Big Sisters, and did crafts with kids whose moms were abused and needed help.

In Grade 12, Shannon spent many hours applying for scholarships and won the Terry Fox Humanitarian Award, which paid for her entire undergrad degree. Other scholarships and savings from part-time jobs during high school and her undergrad paid for her tuition and living expenses in Edmonton for the first two years of medical school. She will still graduate with some debt, but the load is manageable compared with what it could have been.

“I guess you could say the first six years of post-secondary went exactly according to my Grade 10 plan,” says Shannon with a laugh.

Shannon is moving back home to Calgary for her internal medicine residency. But today, she’ll be walking across the stage at the Northern Jubilee Auditorium accepting her medical degree as part of the U of A medical school’s centennial graduating class—and looking out into the crowd for her inspiration, her younger sister Erin, as her dreams come to fruition.