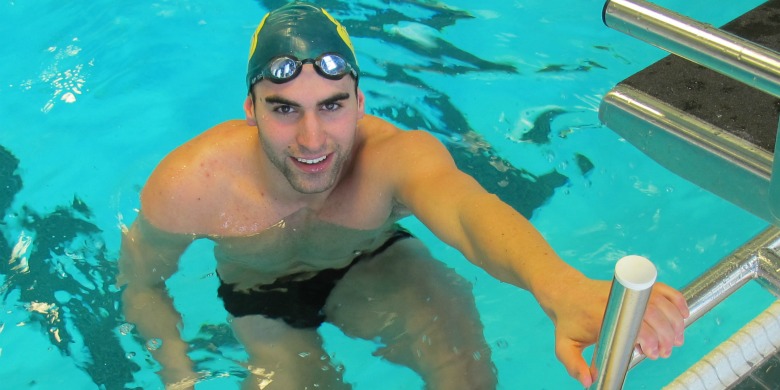 (Edmonton) Considering the dedication needed for both medical school and competitive swimming, you’d be hard-pressed to find someone who can excel at both. But the Faculty of Medicine and Dentistry is boasting this rare find — an emerging top-level athlete and star student.

His name is Jeremy Kubik, a second-year med student. Recently the 22-year-old Calgarian anchored the University of Alberta’s men’s medley relay to victory – putting the U of A men’s swim team in top spot at the University Challenge Cup, a swim meet only attended by the top schools in Canada.

The relay was the deciding race at the competition and the Golden Bears’ last chance to surge to the top. They ended up beating two swimming powerhouses, the University of Toronto and the defending national champion, the University of Calgary.

“It was a great meet, not only for me but for the team,” said Kubik.
Away from the pool, Kubik is a dedicated student. He was accepted to medical school after just three years of his undergraduate degree at University of Calgary, whereas most students are not accepted before they finish their bachelor’s degree.

“He’s such a great student, he works so hard,” said Kent Stobart, associate dean undergraduate medical education. “We’re very proud of what Jeremy’s accomplished and we’ve tried to be as flexible as possible to accommodate his national calibre swimming.”

Kubik is expected to train nine times during the week, typically for about two hours. His medical school schedule isn’t nearly as flexible as his teammates’ who are doing their undergraduate degrees. Oftentimes Kubik has class from 8:00 a.m. until 5:00 p.m. This means that a lot of the time he trains during recreational swim times.

“I’ll come in right as the team is finishing and I’ll talk to the coach and ask, ‘what did we do for practice today,’ ” said Kubik. “Then I do my practice during recreation times.

“It’s very frustrating swimming during rec times, not only because the team isn’t there to joke around with. There’s no coach to motivate you and on top of that you have all these public swimmers that get in your way.”

“It’s hard to train fast, because you’re the guy getting in the way when you’re too good,” said Bill Humby, head coach of the Golden Bear and Panda swim teams. “The nicest thing about being on a team is even after a long day of school it’s kind of like going to hang out with your friends. But instead of being reinforced and getting to go swim with your friends, you’ve gotta deal with [less than ideal training conditions].”

Even so, Kubik is doing something not many would expect. He’s improving. During three years of swimming with the University of Calgary he never made his Canadian Interuniversity Sport (CIS) championship qualifying time. Last year with the U of A team he made the qualifying time and finished sixth at the CIS championships after coming into the competition ranked 85th. This year, he’s ranked second in the nation in the 50-metre freestyle and the Golden Bears are ranked first in the nation for the first time in the program’s history.

“He’s a really dedicated and determined kind of guy,” said Humby. “He just knows that to get somewhere you’ve got to keep on working, you can’t take it for granted. He was really appreciative of getting an opportunity to be on the team and, heck, he’s going to make the most of it.”