Study of 2,500 news stories over 37 years reveals gender gap in nature of coverage. 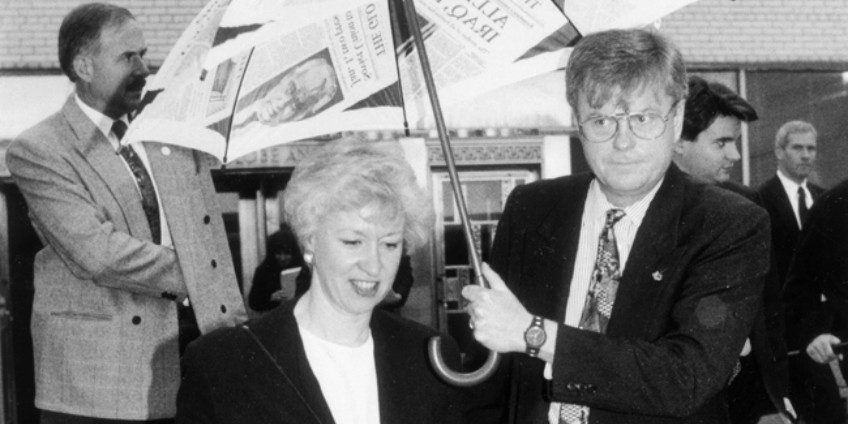 Personal coverage of Kim Campbell during her leadership run for the federal Progressive Conservative Party in 1993 tended to focus on her physical characteristics and marital status. (Photo: Globe and Mail archives)

Female politicians running for the leadership of a federal party in Canada don’t receive less press coverage than their male counterparts, but in most cases the coverage is far more personal.

That’s the conclusion reached by University of Alberta political scientist Linda Trimble and her co-authors after examining some 2,500 articles in The Globe and Mail over a 37-year period from 1975 to 2012.

“Female leadership hopefuls were as likely as their male counterparts to be named in the news, named first, named several times, named in a headline and quoted in a story—and were more likely to be featured in a photograph,” write the authors of the study, published in The International Journal of Press/Politics.

When it comes to visibility of leadership candidates, what matters most is competitiveness, said Trimble.

“Journalists are really focused on who's winning. They draw those conclusions largely by how much money candidates have raised, and probably also by how much support they have from other members of the parliamentary caucus.”

But that’s where the gender balance stops. There is a clear gap between men and women in the nature of the coverage, noted Trimble. “For the women candidates, there was more attention to their sexual identities, their physical appearances and their marital situations.”

"A good example is (former prime minister) Kim Campbell in 1993, who had probably the most punitive coverage of all of them in so many different ways—the idea that a twice-divorced woman was emotional, unreliable, unstable.

“When she was running for the Progressive Conservative leadership, Jean Charest's campaign made a big deal of that…. Her ‘sexy’ bare-shouldered photograph and her twice-divorced, childless status were contrasted with the slightly pudgy physique and traditional family life of her primary opponent, Charest.”

The findings are the result of a four-year study on gender and political press coverage in Canada launched in 2010. The authors started publishing findings in 2014; some are still being released.

"It was a large project,” said Trimble. “For the first two years of the study, we were just gathering studies and coding them.”

The researchers chose to focus on The Globe and Mail because it is the only national newspaper that published throughout the 37-year period, and is considered Canada’s paper of record.

“It’s also one that’s quite influential,” said Trimble, adding the analysis is not meant to pass judgment on the Globe, but only to expose how its coverage more broadly reflects societal attitudes and assumptions.

During the time examined, 30 candidates contested 13 Canadian federal party leadership races. “Canada provides a useful case study of the gendered elements of personalization because competitive women candidates sought the party leadership in 11 of the 13 contests, winning four of them,” said Trimble.

Many female politicians had complained of “the lipstick watch,” as well as “hair, hemlines and husbands coverage—we looked at that and found women do have something to complain about,” Trimble pointed out.

“The phenomenon of personalization is especially problematic for women because it politicizes their sexed bodies and domestic routines.”

‘Unfit’ men get punished by press

Though female politicians got more than their share of personal attention, men did not escape unscathed.

“Men got discussed quite a lot (in personal terms), more than we often assume. Those who don't fit the norm—who are insufficiently burly and commanding—are punished for it by their description."

Svend Robinson, the first openly gay leadership candidate, is a case in point. As the first member of Parliament to come out as gay while in office, his sexual orientation "was a huge emphasis in the coverage,” said Trimble.

“Paul Martin, when he ran for the Liberal leadership and won, was characterized as too old and fat for the job. And Stephen Harper was once praised for having lost weight, and therefore being fit for the job.”

"Men candidates had just as much coverage of their children, but that was mainly because they tended to foreground their children in their lives. Men use their traditional nuclear families as a sign of stability, normalcy, hetero-normativity, honesty, empathy and compassion. That's problematic for a lot of their female competitors."

Contrary to the authors’ expectations, however, the amount of personal coverage overall did not increase over time with the advent of social media and more invasive trends in television.

“We found no evidence that the amount of commentary on politicians’ physical selves and personal lives has increased over time to reflect the ascendance of television and its more intimate and dramatic storytelling tropes.”