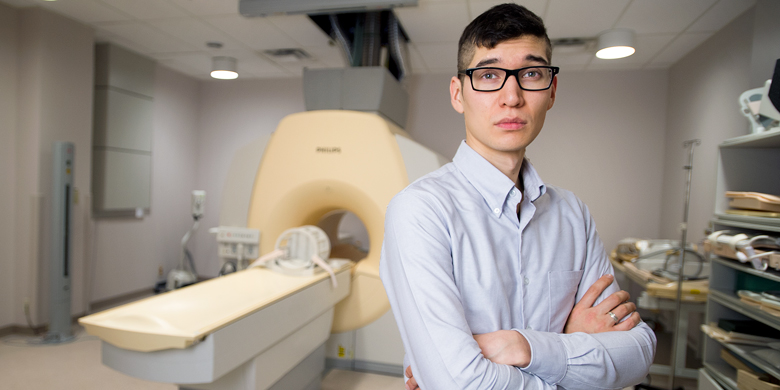 (Edmonton) Since the age of 10, Dylan Breitkreutz has heard his granddad urge him to study medicine. As it turns out, he listened—and it was wise advice indeed.

The University of Alberta graduate student, now 26, is the 2013 winner of the NSERC $10,000 André Hamer Postgraduate Prize, for his master’s thesis work on finding better tools to gauge effectiveness of cancer treatments.

The prize is given to promising young scientists in Canada based on academic excellence, research potential and interpersonal skills.

Based in the Division of Medical Physics of the oncology department in the Faculty of Medicine & Dentistry, Breitkreutz is proud to uphold a family tradition of attending the U of A’s Augustana Campus in Camrose, along with his sister. His parents were there years ago as Camrose Lutheran College students.

In fact, Breitkreutz credits his growth as a young researcher to the years he spent at Augustana earning an undergraduate degree in math, physics and philosophy.

“If it weren’t for my time at Augustana, I don’t think I would be here now. They offered a smaller physics and math program, and I got to know my teachers pretty well. I was spurred on to find research projects.”

Intrigued by the ideas of motion and rates of change, Breitkreutz sees physics in action all around him. “It applies to things we see every day; it’s a framework of ideas we can use to interpret the world around us.” As an undergrad at Augustana, he spent summers in the lab, writing a paper on computational mathematics that was published in 2011 and a second paper on the entropy of cell signalling pathways that was published in the high-profile journal PNAS in 2012. He was the lead author on both.

Today, Breitkreutz is in the second year of his master’s work at the U of A, focused on employing an imaging protocol in magnetic resonance spectroscopy as a way to sharpen early evaluation of cancer treatments, breast cancer in particular.

Breitkreutz’s research homes in on the spine, a common area for breast cancer to spread. Chronic back pain, weakness and even paralysis can result. Fat levels in spinal bone marrow appear to decrease when a tumour takes hold, and increase when a patient is responding well to treatment.

His work concentrates on ways to improve measurement of these fat levels, in the hopes of showing how well (or not) radiation therapy is working for a cancer patient.

“We can’t always be sure of how well a therapy is working, so if we can find a way to get a better handle on that, it has the potential to help make treatment more effective for a patient.”

Once he earns his master’s degree in medical physics, Breitkreutz, deeply committed to his field, plans to move on to a PhD.

“I want to do something with my life that makes a human contribution. Medical physics can be a nice mix of clinical, academic and research work, and has a worthwhile, tangible outcome. It has the potential to directly affect people’s lives.”

Breitkreutz, who is proud to be recognized by NSERC for his work, joins other young U of A researchers who have won the prize in past years, including Rhodes Scholar Megan Engel in 2012, Kenneth Chau in 2005 and Selena Smith in 2004.