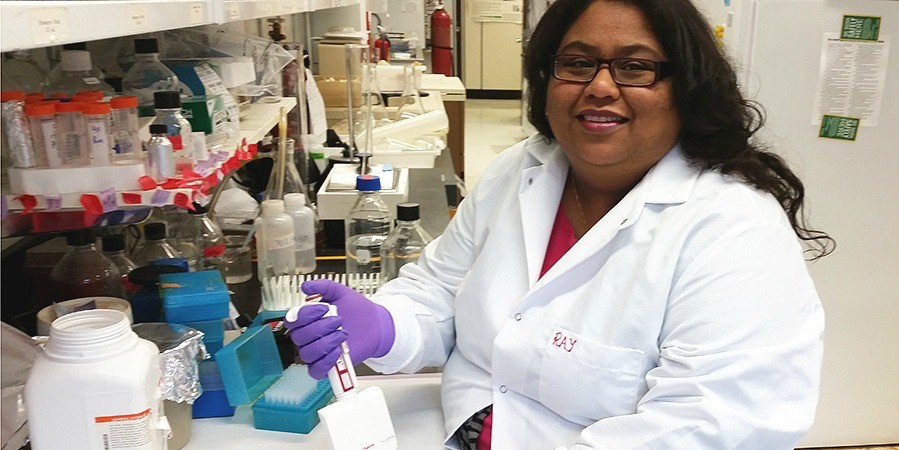 Ray Amith was granted a $50,000 post-doctoral fellowship from the Canadian Breast Cancer Foundation.

For the past two years, Ray Amith has devoted much of her time to finding ways to improve breast cancer treatment. But this past winter, it became more personal.

“A close family friend was diagnosed with breast cancer. She is very close to me—like a second mom,” she says.

For Amith, the scare brought a new perspective on the importance of her work. “It’s hard for anyone to hear the word cancer, and especially in your family, so it makes my research more worthwhile.”

Her work is proving so worthwhile that the University of Alberta researcher in the Faculty of Medicine & Dentistry was granted a $50,000 Postdoctoral Fellowship Grant from the Canadian Breast Cancer Foundation.

“Through her application, Dr. Amith showed she has the capacity to become a strong independent researcher, particularly given her track record, which demonstrates she has been very productive during her PhD and subsequent training, with numerous publications in very good journals,” says Krista Rivet, director of allocations with the foundation.

“When this was considered along with the translational opportunities and novelty of the project she is working on and the support available to her through her supervisor, Dr. Amith ranked within the top four of the competition.”

Amith has been working in Larry Fliegel’s lab in the Department of Biochemistry since 2012 on a project looking at a specific protein’s effect on triggering the spread of breast cancer cells.

“My project focuses on what other proteins might regulate the particular protein that we’re interested in: the sodium proton exchanger NHE1,” she says. “I’m also looking at how manipulating NHE1, using inhibitors for example, could change the susceptibility of breast cancer cells to chemotherapy agents, like paclitaxel, which is very commonly used in the treatment of breast cancer.”

Fliegel, Amith’s supervisor and mentor, says that she has been an integral part of the team and that her efforts appear to be paying off.

“Our work showed that NHE1 inhibitors already are able to improve the efficacy of paclitaxel, [although] those inhibitors we’ve tested are not ones you can use clinically,” he says. “We want to go back and use the ones that are approved clinically, so that we can come up with a real treatment that will improve chemotherapy in breast cancer.”

Amith and Fliegel hope to publish their findings over the next few months. As for Amith, her family friend’s brush with breast cancer has left her more focused than ever. “They were able to do surgery and short chemo, and she’s fine. She’s in remission, thank goodness—so far, so good.”