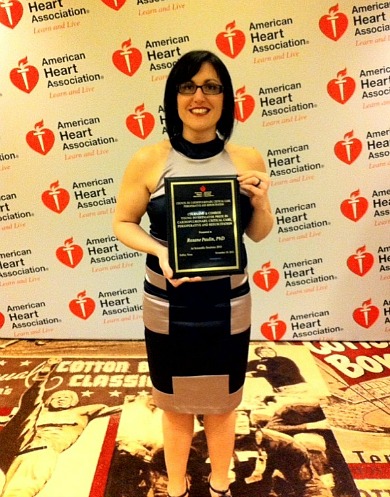 (Edmonton) Roxane Paulin, a post-doctoral fellow with the University of Alberta’s Faculty of Medicine & Dentistry, was recently awarded the 2013 Cournand and Comroe Young Investigator Award from the American Heart Association—edging out competitors from Harvard, Stanford and the University of Tokyo, and a colleague from the U of A. It is very rare to have two finalists from the same post-secondary institution.

Paolo Raggi, a professor of medicine, the director of the Mazankowski Alberta Heart Institute and the Capital Health Chair in Cardiac Research, said the award is a major achievement.

“We are delighted at the performance of our trainees at the recent American Heart Association young investigators competition. It is extremely rare to have two competitors from the same university among the finalists, and this time the University of Alberta received the winning award. We are indebted to Dr. Michelakis for his excellent mentoring and to Dr. Paulin for her extraordinary effort that allowed her to bring home the palm.”

Michelakis said this major honour, awarded at the biggest cardiovascular meeting in the world, demonstrates that the “University of Alberta’s cardiovascular environment is fertile and attracts bright trainees who come from abroad and do very well.” He noted that the U of A’s two finalists came from France and Australia.

“We have found ourselves in the position of having two finalists in one of the most competitive award competitions there is, which shows that our trainee program is internationally respected and that our efforts to create the best young cardiovascular scientists in the world are being recognized.”

Paulin and the other four finalists each presented a paper that will soon be published. Her research, which focused on high blood pressure in the lungs, offered important clues about the genetic background and a novel role of mitochondria and metabolism in this deadly disease. Her findings may lead to new therapies and new ways to diagnose the disease.

The other U of A finalist was Georg Schmoelzer, who works in the lab of Po-Yin Cheung. Schmoelzer’s research focuses on physiological changes during the transition at birth and finding interventions to improve recovery and outcomes for newborns who need to be resuscitated. Schmoelzer works in the Department of Pediatrics.