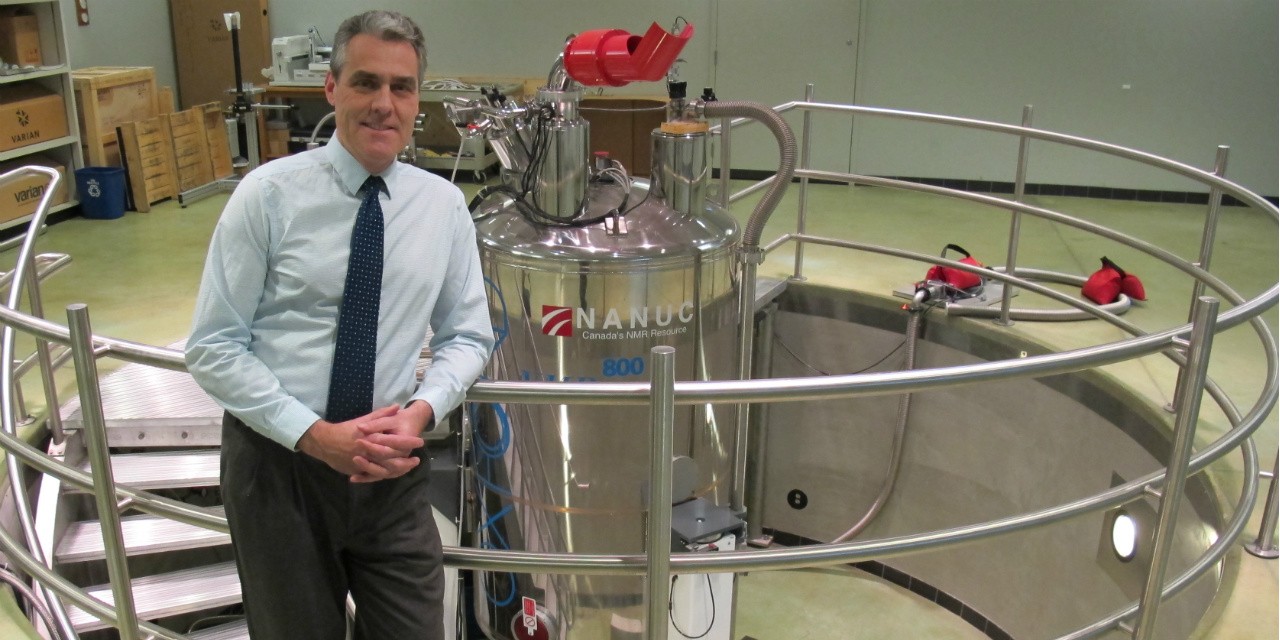 Michael Overduin was part of an international research team that used powerful magnetic equipment at the National High Field Nuclear Magnetic Resonance Centre in Edmonton to aid in their discovery of a protein linked with the out-of-control growth of cancer cells. (Photo: Ross Neitz)

A discovery sheds light on how cancerous cells differ from healthy ones, and could lead to the development of new strategies for therapeutic intervention for difficult-to-treat cancers in the future.

An international team of investigators found a “stop sign”—a modified protein researchers named a PIP-stop—inside cells that are overused by cancerous cells that effectively prevents healthy ones from sorting material in the way they were designed to.

“We have discovered that breast cancer, leukemia, lymphoma and neuroblastoma cells have too many PIP-stops. This would upset protein function, and opens up a new avenue for developing drugs that block PIP-stop formation by kinase enzymes,” said Michael Overduin, a University of Alberta cancer researcher and professor of biochemistry, who led the research project.

The team named the modification a PIP-stop because it stops proteins from interacting with lipid molecules called PIP.

Before making their discovery, the researchers first solved the 3-D structure of a sorting nexin protein, which is key to sorting proteins to their proper locations within the cell. Powerful magnets in the U.K. and in the National High Field Nuclear Magnetic Resonance Centre (NANUC), Canada’s national magnet lab based in Edmonton, were then used to detect signals from within individual atoms within the protein structure.

By focusing on the protein structure, the team was able to discover the PIP-stop and see how it blocked the protein’s function. The PIP-stop is a phosphate which is added to the protein surface that binds the PIP lipid, and normally controls how proteins attach to membranes.

Samples from cancer patients have too many PIP-stops, which could lead to the unregulated growth seen in tumour cells. Similar PIP-stops were found to be overused in a large number of other proteins involved in other cancer types, where they could also influence tumour growth.

“Our goal now is to design inhibitors for the overactive kinases that create PIP-stops, and to use this information to design drug molecules that block the progression of cancers, particularly those which lack effective treatments,” said Overduin.

The study was published this month in the journal Nature Communications and was carried out using grants from Alberta Innovates and funders in the U.K. and Switzerland.