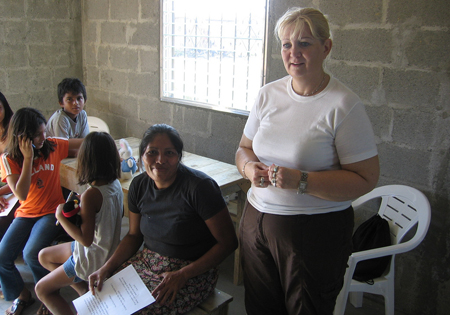 110429-goodwilllarge
Shirley Auvigne (right), a teaching and learning specialist with the faculty, has been co-ordinating the shoebox collection for Operation Christmas Child for St. Albert and district for the past three years, and has packed shoeboxes of toys, school supplies and hygiene items for more than a decade.

(Edmonton) A staff member with the Faculty of Medicine & Dentistry at the University of Alberta has recently returned from an international goodwill trip where she brought joy to a poor Honduran family who had been living in a cramped wood shack, and to thousands of children in Chile’s earthquake zone.

Shirley Auvigne, a teaching and learning specialist with the faculty, has been co-ordinating the shoebox collection for Operation Christmas Child for St. Albert and district for the past three years, and has packed shoeboxes of toys, school supplies and hygiene items for more than a decade. This is the first year she’s been involved in an international trip to personally deliver the gifts to children living in difficult conditions. In total, her 18-person team of Canadians delivered 8,000 shoeboxes over four days. They travelled to numerous small communities about 600 kilometres south of Santiago, which had been hit by the 2010 earthquake.

After the Chilean leg of the trip wrapped up on Feb. 28, Auvigne headed to Honduras where she was the project manager for a house that was built for a single mother of three children. The 48-year-old single mother, whose name is Maria, is HIV positive and knows no factories will hire her. Maria and her children have been living in a cramped, rundown 10-by-13-foot wooden structure that has holes in the floor and roof; it has no bathroom and no kitchen. Once Auvigne’s group heard of her plight, they selected her family to be the recipient of their group’s fourth annual “house build.” Each year the group builds a clean, new concrete home for a family in need for free.

“Doing this work is extremely rewarding,” says Auvigne. “It certainly is my passion. What I receive—to see the joy on people’s faces—outweighs all the hard work. You build such a strong relationship with each family you work with. They are eternally grateful for our efforts.”

A little over four years ago, an Edmonton businessman told Auvigne he would like to donate money to a goodwill project that would help people in need, preferably in a poverty-stricken country. Days later, another businessman, Trevor Hoover, with the custom-home-building company Habitat Studio & Workshop, contacted Auvigne and told her the company would like to get involved with an international aid initiative where they could help build homes for those less fortunate. Auvigne brought the parties together and since then, more donors have signed on.

Each year she goes to Honduras, Auvigne meets Hoover and three of his employees on site. Auvigne then manages the project and is responsible for organizing food and in-country transportation, finding a local translator and assisting on site. The home-building crew finishes its work in five days—making trusses, installing sheet metal roofing, framing, drywalling and installing windows, doors, electrical, sinks and plumbing.
The group plans to return to Honduras for years to come because the need is so great, says Hoover.

“We could build one house each week for the rest of our lives and we would still have more work to do. That’s how desperate the need there is. But it is good to know we are making a difference, one house at a time.”

A giant planet 344 light-years from Earth and the star it orbits have new names in the Cree language, thanks to a national contest. The star HD136418 and its exoplanet HD136418b were renamed Nikâwiy (pronounced NI-gah-wee) and Awasis (pronounced …
Read more from this release

Bullied children are nearly 40 per cent more likely to be diagnosed with mental health issues as teenagers than those who were not involved with bullying, according to research from the University of Alberta and Dalhousie University.  “Bullying …
Read more from this release

New research from University of Alberta cardiologists suggests that treating one of the most serious types of heart attack with clot-busting drugs along with the current primary treatment may lead to better health outcomes for patients. When a …
Read more from this release