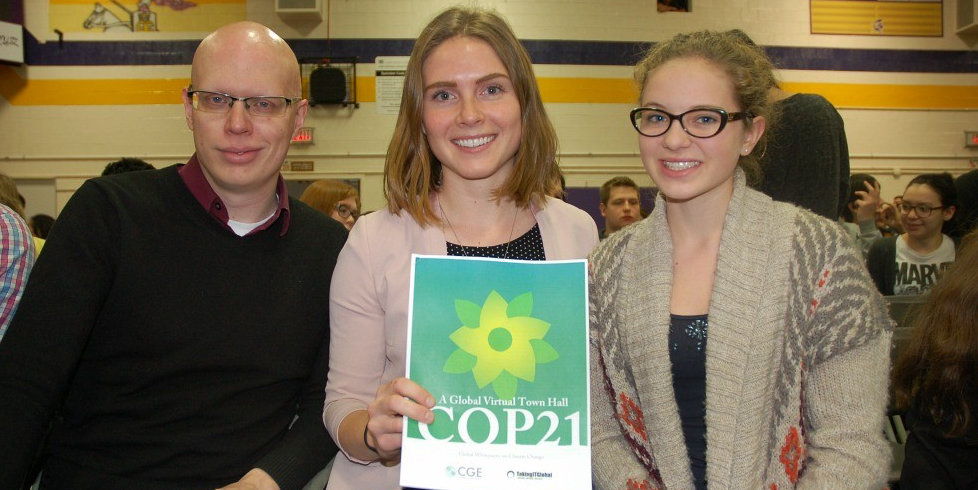 Ask 200 high schoolers from 10 countries about the planet’s most pressing climate change issues, and the answers you’ll get will be as diverse as the group itself.

Students from countries with significant amounts of coastline, such as the Philippines, have a strong desire to keep flotillas of trash from being dumped into the oceans. Protecting surface water is a priority in India, where pollution is a major problem due to industrial effluent. Canadian students, on the other hand, strongly support Indigenous land rights and holding corporations to higher standards before developing biologically or culturally sensitive lands.

Despite differences in perspective, this group of students united in passion and purpose to present their climate change policy recommendations to global leaders at the Conference of Youth held last week in Paris, the precursor to the COP21 climate change summit. In total, they poured 25,000 hours of work into the project, eventually finding consensus through the mentorship of nearly a dozen University of Alberta graduate students.

“U of A students are integral to moulding and shaping and mentoring young people right across the planet,” said Terry Godwaldt, director of the Centre for Global Education, which mobilized the international collaboration, including the U of A student-mentors whose backgrounds ranged from microbial ecology and engineering to education and public health.

“These papers would not happen if it were not for this solid group of experts, not surpassed anywhere in the world when it comes to this expertise.”

A teacher at Edmonton’s Queen Elizabeth High School, Godwaldt founded the centre in 2006 to bring together students and draft policy papers at every level of government.

With the importance of COP21 to action on climate change, Godwaldt says, the group felt it was important to take their efforts “to the next level and have a global piece.”

Doctoral student Beth Richardson lent her expertise in cell biology, where she studies how microbes adapt to the presence of hydrocarbons in the environment, particularly related to oil extraction. She responded to a call for mentor volunteers from Faculty of Graduate Studies and Research, thinking she would help students’ grasp of the issues by sharing newspaper articles, journal commentaries and TED Talks videos on climate change. She did that, but also found herself co-leading her fellow U of A mentors and assisting with editing the white paper.

Students collaborated via virtual classrooms, working in teams of country pairings—Canada and Brazil were one such group—to research issues and consult their local communities. The students provided a blend of regional perspectives that encouraged diversity of opinion, Richardson said, before bringing their collective ideas to a larger table.

“It’s very easy to get a one-sided view on certain issues, and it was our job to explore all of the alternative possibilities,” Richardson said, citing the rights of Indigenous peoples in resource extraction as one example.

Students studied and debated the Peace River Site C dam, an $8.3-billion hydroelectric project that would provide enormous amounts of renewable energy but also flood 6,000 hectares of land in northeastern British Columbia—a plan opposed by First Nations leaders. Some students felt the importance of renewable energy trumped the issue of Indigenous land rights, but others disagreed.

“That creates some really good conversation and that’s part of what we were able to provide to this program,” Richardson said.

Students eventually found consensus at a Nov. 13 global town hall attended by all 200 students—some Skyping in at all times of day or night depending on their time zone. The resulting white paper is a mix of policy recommendations in six key areas—energy, water and oceans, resilience and adaptation, agriculture, forests and land use, and international aid.

“A lot of the policy recommendations these students provided acknowledge regional differences but at the same time there is one unified goal,” said Elizabeth Campbell, a master’s student in the U of A’s School of Public Health, another of the mentor leaders who helped with the editing process.

The students received some additional expertise from U of A faculty, including energy economist Andrew Leach, chair of Alberta’s climate change panel that led to a new provincial climate change strategy. Local students had a chance to meet Premier Rachel Notley during the climate change announcement.

Godwaldt said he’s “thrilled” with how the collaboration played out and the influence of the mentors. Students who never considered graduate studies have seen the quality of work U of A students brought to the table and now see it as a leader in the world, he said.