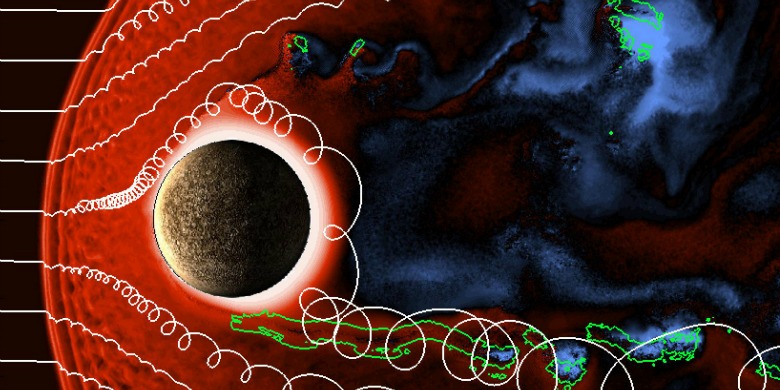 130801-mercurybanner
Mercury’s magnetosphere is represented by a white corona in this image. The magnetosphere is asymmetrical, more pronounced on the dusk side of the planet. (Image: Jan Paral, Chris Want)

(Edmonton) Just before NASA's MESSENGER spacecraft began sending back stunning pictures of the Earth and the moon from its orbit around Mercury earlier this summer, two University of Alberta scientists were using NASA data to look back at Mercury.

Physics professor Robert Rankin and graduate student Jan Paral used data taken by MESSENGER to create a sophisticated computer simulation that explains unique behaviour in Mercury’s magnetosphere—an  area of space near the planet in which charged particles are controlled by Mercury’s magnetic field.

The behaviour relates to a mysterious asymmetry in the Kelvin-Helmholtz Instability (KHI)—a theory that predicts the onset of instability in the flow of fluids of different densities moving at various speeds—which explains how energy and mass of solar wind plasma are loaded into, and thus shape, Mercury's magnetosphere

“The KHI is key to understanding how Mercury's magnetosphere is affected by the solar wind,” said Rankin, who supervised the development of the hybrid-code that Paral developed during his PhD. “When the KHI and asymmetry was first observed, we quickly determined that ion gyration must be a factor.”

To help prove this conjecture, Paral undertook the monumental task to develop the simulation. “He had to choose and implement the correct algorithms. He had to make them work on massively parallel computers at IBM Watson Labs and subsequently on WestGrid (the computer clusters located at the U of A). He had to test and validate the code. Last, but not least, he had to solve the problem of the KHI asymmetry,” said Rankin.

Paral’s code is now being used to study the magnetic fields around objects that, like Mercury, have a weak magnetic field, including Earth’s moon, Mars, Venus and comets. Rankin says Paral’s plasma-based code is also applicable to an upcoming project funded by the Canadian Space Agency.

“NASA has said that dust on the moon presents the most significant challenge to astronauts on the moon,” said Rankin. “It coats spacesuits and equipment, gets into lungs and is a general hazard.”

Along with funding from the Canadian Space Agency, IBM and Westgrid, Rankin and Paral’s work was supported with funding and computing access provided by Canada’s Advanced Research and Innovation Network, the Natural Sciences and Engineering Research Council of Canada and the U of A’s Academic Information and Communication Technologies.

The results were published in the science journal Nature Communications.