Meteorite delivers Martian secrets to U of A researcher 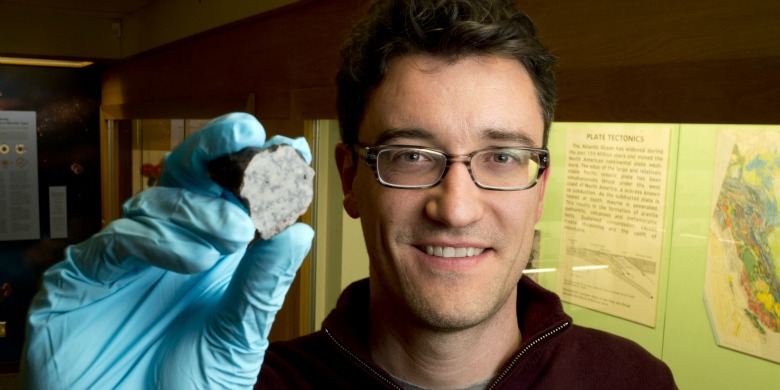 (Edmonton) A meteorite that landed in the Moroccan desert 14 months ago is providing more information about Mars, the planet where it originated.

University of Alberta researcher Chris Herd helped in the study of the Tissint meteorite, in which traces of Mars’ unique atmosphere are trapped.

“Our team matched traces of gases found inside the Tissint meteorite with samples of Mars’ atmosphere collected in 1976 by Viking, NASA’s Mars lander mission,” said Herd.

Herd explained that the meteorite started out 600 million years ago as a fairly typical volcanic rock on the surface of Mars, until it was launched off the planet by the impact of an asteroid.

“At the instant of that impact with Mars, a shock wave shot through the rock,” said Herd. “Cracks and fissures within the rock were sealed instantly by the heat, trapping components of Mars’ atmosphere inside, and forming black, glassy spots.”

The team estimates that for a period of between 700,000 and one million years the rock floated through outer space, until July 2011 when it streaked through Earth’s atmosphere to land in Morocco.

This is only the fifth time a Martian meteorite landing was witnessed. Herd says the key reason this meteorite is so important is that it was picked up just a few months after landing and was not subjected to weathering or contamination on this planet.

The rock’s Martian weathering involved water, which means water was present on the surface of Mars within the past few hundred million years. But Herd says this meteorite sample does not carry any evidence that the water supported any life forms.

“Because the Martian rock was subjected to such intense heat, any water-borne microbial life forms that may have existed deep within cracks of the rock would have been destroyed,” said Herd.

Curiosity, NASA’s current Mars rover mission, is moving around the red planet searching for more information on the history of Mars.

The team’s study makes a return mission to Mars that will bring rocks back to Earth all the more crucial, says Herd. “Martian rocks delivered to Earth by a spacecraft would provide the best opportunity to see if life was ever clinging to the surface of Mars.”

A multinational team worked on the Tissint meteorite research. Joining Herd from the U of A’s Department of Earth and Atmospheric Sciences was geochemistry technician Guangcheng Chen. John Duke, director of the U of A’s SLOWPOKE Nuclear Reactor Facility, was also a co-author of the research paper published online Oct. 11 in the journal Science.

Meteorite delivers Martian secrets to U of A researcher
Newsroom