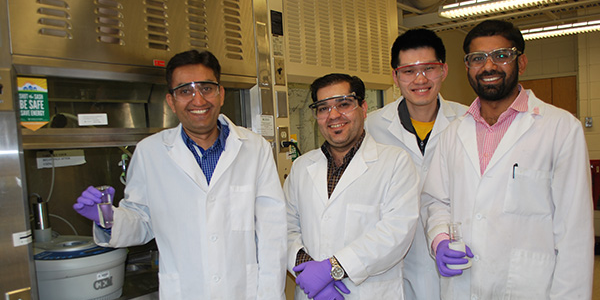 By using microwaves to convert plant oils and waste cooking oil into fine chemicals, researcher Aman Ullah has hit upon a faster, more efficient and cheaper process than the conventional thermal heating approach.

Fine chemicals are pure or near-pure chemical substances that are manipulated for use in a variety of products in an array of industries, including chemicals, plastics, pharmaceuticals, bio-medicals and cosmetics. They have high value but are expensive to produce.

Currently, about 90 per cent of these fine chemicals are created from petroleum. In recent years, scientists have tried to create fine chemicals from renewable resources such as oils, using various approaches. But doing it efficiently and rapidly is challenging, said Ullah, a chemical scientist in the Department of Agriculture, Food and Nutritional Science, because generally reactions are carried out in organic solvents, requiring a high amount of the catalyst and longer reaction times, which limits the viability of those processes.

Using microwaves solves each of those issues.

Microwaves are electromagnetic radiations in the frequency range between infrared and radio waves. When hit by microwaves, oils act like dipoles (a molecule in which positive electric charge is separated from negative charge) and they try to align themselves with the changing electric field.

The direction of an electric field changes at different frequencies, but with extremely rapid changes in direction (2.45 billion times per second in a typical microwave), the dipoles can’t keep up. Instead, energy is generated in the form of heat, through molecular friction and dielectric loss (the dissipation of energy).

This microwave dielectric heating is an environmentally benign process that has several advantages compared to using conventional heating for chemical conversions. It produces high-energy savings, higher yields in shorter times, direct heating of a species, and uniform heating.

Ullah is still determining exactly how much faster and cheaper his method can be, but if previous reports of microwave use in other applications are an indicator, it will be at least two-fold, and as much as 100-fold, he said.

In addition to extracting the chemicals from plant biomass, Ullah is also applying microwaves to waste cooking oil, and is recording very high conversion percentages there, too—although the oils must first be purified of food particles.

Patents for his microwave-assisted method are pending in the U.S. and Canada. In mid-2017, Ullah takes delivery of two custom-made microwave reactors that he’ll use to scale-up his process at Agri-Food Discovery Place, a world-class small-scale pilot processing facility at the University of Alberta, with the goal of creating a commercial spinoff in two to three years.

Support for this project came from Alberta Innovates Bio Solutions.