More intense wildfires are here to stay and we need to adapt: report 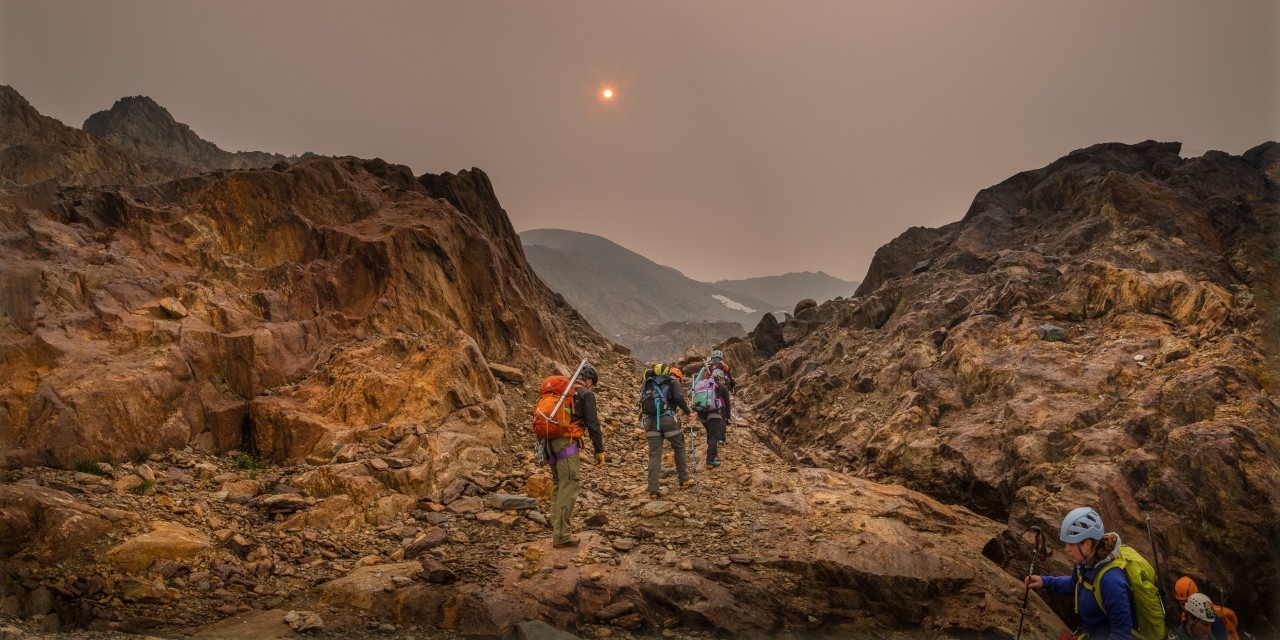 Haze from wildfire smoke obscures the sun as U of A researcher Zac Robinson leads students on a hike in B.C.'s Monashee Mountains in August 2018. Robinson is one of the editors of a new report focusing on how wildfires are affecting Canada's alpine regions. (Photo: Mary Sanseverino)

Zac Robinson remembers hiking through B.C.’s Monashee Mountains last August and, on a cloudless day, staring directly into the sun.

What made his look upwards a possibility was the smoke collecting from more than 560 B.C. forest fires all burning in unison, making the air quality in Western Canada the most hazardous in the world.

“It was dark and eerie, it was wild, and it shaped our conversations, which turned from the fire and the smoke to how fire is connected to larger processes at work that are pushing change in the alpine,” said Robinson, a mountain historian at the University of Alberta, who was leading a dozen students through a skills course as part of the Alpine Club of Canada’s summer-long general mountaineering camp.

“We would wake up in the morning and brush ash off our tent that had accumulated in the night. Then we would talk about what this material that is just falling everywhere does to glaciers.”

Robinson explained while white snow reflects light, energy and heat really well, the dark elements of the ash do just the opposite. In essence, the forest fires and resulting ash become a “feedback loop for mass wastage of these glaciers.”

It was then that Robinson and former U of A mountain ecologist David Hik decided wildfires were going to be the main focus of the ACC’s 2019 State of the Mountains Report.

In its second year, the annual report is a collection of expert summaries written to raise awareness about the ways a changing climate is transforming the alpine.

The pair, along with fellow editor Lael Parrott, reached out to Lori Daniels, a University of British Columbia conservation researcher, to write an essay on the vital role wildfire has on ecosystem function and how that understanding has exposed shortcomings of past fire suppression and timber production, and how “learning to coexist with wildfire is critical as our society adapts to climate change.”

“Events that a decade ago we would call ‘100-year events’ are quickly becoming the norm,” said Robinson. “Lori talks about ways we can coexist with fire because it is our new reality.”

Human side of ecological disaster

The other main feature was a followup to last year’s look at the infamous Slims River (Ä’äy Chù) Piracy Event in southwestern Yukon. The Slims River, a major source of water for Kluane Lake (Lhù’ààn Mǟn), effectively ran dry after the Kaskawulsh Glacier receded to the point that its meltwaters began flowing in a different direction. Since 2016, the 81-kilometre-long Kluane Lake has dropped more than three metres.

Robinson said the story of that ecological disaster in the making landed in just about every major news outlet in the world—but there was never a mention of the local people forced to live with the change.

To remedy that, Robinson and his co-editors reached out to Tosh Southwick, a member of the Kluane First Nation, to highlight how the environment shapes local communities and what that looks like on the ground.

“What Tosh wrote back to us was both poignant and deserving of discussion. She said, ‘It was quite a surreal experience when you read or hear about others talking about a particular place that you are so much a part of, without even mentioning any trace of your community, your people or your history.’”

Southwick wrote that the story of the Kluane First Nation is one about the importance and value of meaningful engagement with researchers and “how research in traditional territories needs to be driven in some large part by the people who live there.”

It also served as a lesson of how people who can no longer rely on things to be as they once were must rely on their “long and definitive history of resilience and adaptation,” she said.

“Knowing that mountains are sentinels for change, and that these things are happening and being exacerbated more than other places, what can we learn?” added Robinson.

Of the dozen alpine-related examinations, U of A researchers asked to provide perspectives on the state of the mountains included biological sciences professor Felix Sperling, who outlined the role of the mountain pine beetle and what should be the response to them; recreation researcher Elizabeth Halpenny, who wrote about the need to embrace sustainable tourism in mountain parks; and structural geologist John Waldron, who penned an article on the rise and fall of Newfoundland’s Appalachian mountains.

And while the report serves as an annual call to action, Robinson said the overall theme is that the distress signal is being heard.

“Mountains are, and have always been, extraordinarily dynamic places, but the now-accelerated rates of change occurring in these places are being noticed, and they’re increasingly becoming part of the public conversation.”

More intense wildfires are here to stay and we need to adapt: report